Spot LNG prices for March delivery to east Asia held firm at over $10.00/MMBtu during the last four weeks. Demand remained strong after cold weather, while production outages at plants including the US Sabine Pass and Malaysia’s Bintulu cut supply. Consumers who had delayed buying in February in the hope of a downturn in prices the following month ended up disappointed.

The strong trading in recent weeks resulted in average spot LNG prices for east Asian winter deliveries some 28% higher than the year before, a signal that a long-debated supply surplus expected as a result of new projects coming onstream has not yet been evidenced through lower prices in the market.

In mid-August spot LNG for October was trading at $6.350/MMBtu. But East Asia Index prices climbed steadily higher to a peak of $11.613/MMBtu for February delivery on 15 January. Prices dipped slightly towards the end of winter, but failed to drop below $10.000/MMBtu. Some consumers had been heard in the market to be deferring their purchases from February to March in the hope prices would fall, but this ended up supporting prices for March.

The most recent winter was also stronger than Winter 15/16, when prices averaged $6.922/MMBtu. But it was below the three winters before that: Winter 14/15 averaged $11.335/MMBtu, Winter 13/14 at $17.804/MMBtu and Winter 12/13 at $15.410/MMBtu. Stronger prices in earlier years were a result of higher crude oil prices affecting long-term, oil-indexed LNG contracts and nuclear power plant outages in Japan following the 2011 Fukushima disaster.

The average EAX price for spot LNG to Japan, China, South Korea and Taiwan in March was $10.408/MMBtu during the mid-January to mid-February assessment period. This was down 6% from the February average of $11.124/MMBtu, but up 35% from March the year before.

The EAX held a strong premium to Europe throughout the period, with the Northwest Europe Index averaging at $6.378/MMBtu. This spread encouraged reloads of LNG from European terminal tanks to head to east Asia, with reloads scheduled from countries including France and the Netherlands.

Brent crude prices dipped slightly at the end of the period, offering a potential ceiling to the spot LNG market. If spot LNG rose to cost as much as crude oil, some energy users would be able to switch from gas to oil, limiting further increases in demand.

Malaysia’s 29 million tonnes per annum Bintulu plant saw its production reduced after a leak from the Sabah-Sarawak pipeline that carries gas to the liquefaction plant. Operator PETRONAS said 22 January it had missed no deliveries since 1983 and would “uphold its commitment to customers”, but this may have meant the company buying more spot cargoes in the market to cover its own lost output. For example, PETRONAS was said by market sources to have bought a tender cargo from Australia’s APLNG.

The 18 mtpa US Sabine Pass plant saw freezing temperatures impact its water supplies in January, also reducing production, and leading operator Cheniere to buy volumes from Europe for reload cargoes to compensate. For example, the 160,000cbm Golar Ice was returning from Asia to load from Sabine Pass and nearing the Gulf of Mexico in mid-January, when news emerged of the production problems. The ship then turned to head east across the Atlantic, and lifted a cargo from Spain’s Huelva terminal, which it then took east through the Suez Canal. Cheniere was also heard responsible for a January reload from Barcelona, delivered to Aliaga in Turkey. 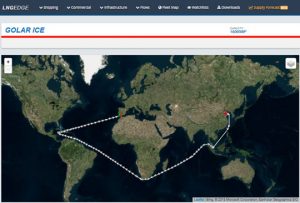 LNG Edge shows the Golar Ice diverting to Spain after production problems in the US.

There were also some problems with production from the Qatargas 1 project at the world’s largest producer, Qatar. The operator decided to carry out maintenance during the first half of February to remedy the issues. Supply commitments to long-term customers in Asia may have been met with volumes from Qatargas 2, resulting in fewer cargoes from there being available for supply to Europe. The UK’s South Hook terminal is expected to receive a cargo from the 266,000cbm Aamira in late February, but this will be the country’s first Qatari cargo since 13 December, 2017.

Peru LNG’s Pampa Melchorita facility suffered an unexpected reduction in gas supplies in early February after a leak in a natural gas liquids pipeline from the upstream Camisea fields resulted in a reduction of associated gas available for liquefaction. The 156,000cbm Gaslog Skagen was heading north from Chile to load a cargo from Peru when the outage occurred. It then turned south instead to look for a cargo from the Atlantic Basin. 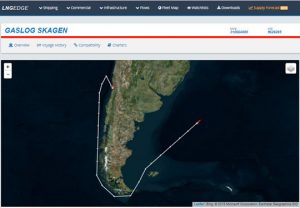 Russia’s 10.8 mtpa Sakhalin 2 project also underwent a few days of maintenance during January, while US authorities have ordered the closure of two of the five storage tanks at Sabine Pass after discovering cracks. Cheniere says this will not impact production, but the loss of storage reduces the plant’s ability to optimize loading schedules when required.

Gas from Russia’s new 5.5 mtpa Yamal LNG project, which loaded its first cargo in December 2017, has now reached destinations as far apart as Boston in the US and Pyeongtaek in South Korea.

The 155,000cbm Gaselys eventually reached Everett in Boston with its Yamal cargo, reloaded from temporary storage on the Isle of Grain, on 28 January. The cargo attracted some attention, as the Yamal project’s finances are subject to US sanctions, but not the gas from the project. The 155,000cbm Provalys was due to deliver a second Russian cargo to the US in late February.

The 155,000cbm LNG Jurojin delivered the first Yamal LNG to east Asia on 10 February, when it unloaded a cargo for KOGAS at Pyeongtaek, South Korea. The cargo had been transferred onto the LNG Jurojin from an ice-breaker ship at Montoir in France.

Yamal LNG cargoes have also been delivered into the gas markets of countries including Jordan, Spain and the UK, in the latter case via the Dragon LNG terminal in Wales on 19 January.

Norwegian cargoes have also been venturing further afield. A cargo from the country’s Hammerfest LNG plant arrived at Canaport in Canada on 8 February. This wasn’t a first for Norway, but is relatively unusual, with Canaport normally taking vessels from Trinidad, but looking for extra supplies due to cold weather in northeast America this winter. The same weather was driving the Russian imports to Boston.

The 155,000cbm Arctic Aurora, meanwhile, left Hammerfest on 14 January to head to Incheon in South Korea, drawn by the wide spread in LNG prices between Europe and east Asia. At the moment cargoes from Yamal and Hammerfest have to take the long route to east Asia via the Suez Canal, as the ice is too thick to use the northern sea route across the Arctic that Yamal LNG ice-breaker vessels are expected to use in summer months. 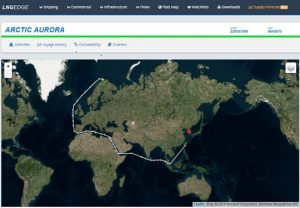 The market is still waiting for the first cargo to load from the 5.25 mtpa Cove Point facility in Maryland, the US. This had been expected to load late in 2017. The operator announced LNG production had started in late January, but it was not clear how consistent the production was and when the first cargo was due.

Egypt’s production, of natural gas, has been more impressive. The giant Zohr field brought on by ENI last year is said to be exceeding its expected production rates, while BP has brought on its 8.5 million cubic metre/day Atoll field seven months ahead of schedule. Increased production of gas from domestic reserves is enabling the country to rapidly scale back its LNG imports at Ain Sukhna in the Gulf of Suez, and may eventually free up excess volume to increase its exports from Idku and Damietta in the Mediterranean.