Spot LNG prices remain at rock-bottom levels despite major cuts to global production, especially from the US.

The ICIS EAX price for spot LNG deliveries to east Asia during August averaged $2.180/MMBtu from mid-June to mid-July, down 53% from the same time last year. The ICIS TTF spot gas benchmark for Europe was even lower, averaging $1.853/MMBtu over the same period. The ICIS South America Index averaged $2.108/MMBtu.

Prices were steady across the four weeks, and not greatly changed from the low levels of the previous month, when the EAX had averaged $2.189/MMBtu. The Asian and European export markets were holding just above US Henry Hub gas price levels, with little incentive for increases in exports.

The US, as the most flexible global LNG producer, has made major cuts to its LNG production to try to re-balance the market in response to low prices. US LNG exports during the second quarter of 2020 were down 30%, or 4.2 million tonnes, from the first quarter of the year. However, even this served only to stabilize, rather than increase prices.

While the US made the largest output cuts, there have also been quarter-on-quarter falls in output from other large producers, including Australia, Malaysia, Qatar and Russia, according to export data calculated from LNG Edge vessel-tracking systems.

Spot LNG remains lower than crude oil and spot LNG purchases remain cheaper than most long-term, oil-linked gas or LNG purchase contracts. This means that companies are trying to turn down volumes received under long-term contracts and buy more spot LNG instead. Pipeline supplies to countries including China and Turkey have been reduced while spot LNG imports are increasing. Other buyers with long-term contracts may seek to re-negotiate the terms of their deals.

China’s LNG imports have rebounded in recent months from the year-on-year decline seen in the first quarter of the year when China was hardest hit by the coronavirus pandemic. Increased economic activity has brought more demand for gas, but the year-on-year increases in LNG are also related to changes in pipeline flows and domestic gas production. Demand has been lower year-on-year from other key regional importers including Japan and South Korea. 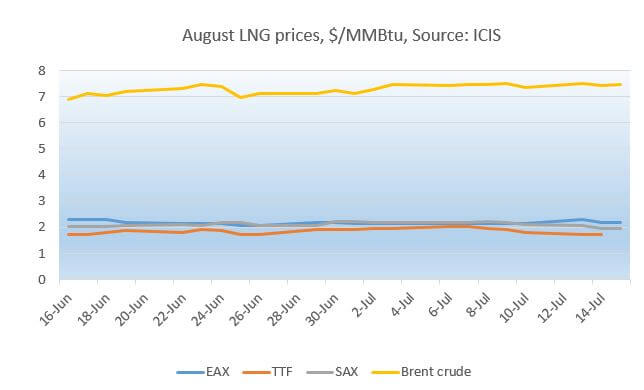 Cuts set to continue across summer

Cutbacks in production are expected to continue across the summer, with talk of over 50 planned cargoes being cancelled across July as a whole.

LNG demand is picking back up in China and India, but this will not be sufficient to rebalance the market after recent years of major additions to export capacity. An unusually cold winter could boost demand enough to reduce the level of cutbacks over winter, but a mild winter or return of coronavirus lockdowns could see cutbacks continue at strong levels across winter. 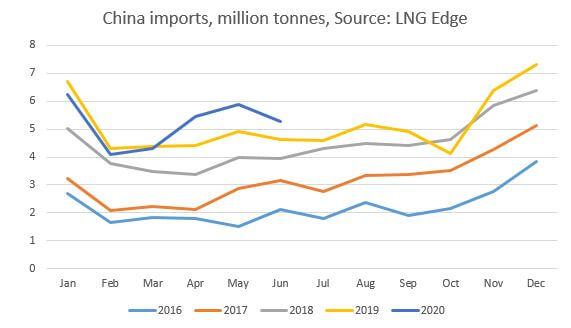 The rate of new capacity additions is slowing however. The only likely new additions in the rest of 2020 are a planned fourth train of 0.9 million tonnes per annum capacity at Russia’s Yamal LNG project and the 1.5mtpa PFLNG 2 floating production project offshore Malaysia. Both of these are small projects compared to the recent spate of new trains in the US at facilities including Cameron and Freeport, which were around 4.5mtpa each.

As LNG suppliers look for new homes for their cargoes during oversupplied market conditions, Nigeria delivered its first ever cargo to Poland. The cargo was delivered on the 137,000cbm LNG Sokoto ship arriving at the Polish port of Swinoujscie on 13 July.

Meanwhile cargoes from Russia’s Yamal LNG plant are delivering through the Arctic Northern Seas Route to east Asia once more. As well as several deliveries to China, on 11 July the 172,000cbm Georgiy Ushakov delivered the first ever Northern Sea Route cargo to Taiwan, arriving at the Yung An terminal.