Spot LNG prices for front-month cargoes started to climb from their previous rock-bottom levels during the four weeks from mid-July to mid-August. Higher prices came as the market’s attention started to move towards the winter, and on the back of some unexpected production outages in Australia.

The ICIS EAX price for spot LNG deliveries to east Asia during September averaged $2.808/MMBtu, rising 29% from the average price for deliveries during August. With most of the world’s key LNG importers being in the northern hemisphere, physical demand for LNG for heating will grow as the market heads towards the fourth quarter.

Traders also said that problems at Australia’s Gorgon LNG plant were affecting sentiment. The Australian plant had been expected to bring its second 5.2 million tonnes per annum train back from maintenance in July, but delayed the return to September after discovering cracks in equipment. Concerns were then raised that the problems affecting the train could also affect the other two trains at the plant, meaning that they too could require work in the future.

There was also some planned maintenance affecting other Australian facilities in July and August, including at the east coast APLNG, GLNG and QCLNG facilities.
The September EAX average was down by 34% from the previous year’s September average. In general terms the market remains heavily oversupplied due to strong new capacity additions in recent years, and the demand-destruction impact of the coronavirus pandemic.

The ICIS TTF benchmark for Europe’s spot gas markets picked up in August too, though not quite as much as the EAX. The TTF front-month averaged $2.047/MMBtu across the four weeks, some 75 cents below the EAX, which made East Asia the premium destination for cargoes. The ICIS SAX price for deliveries to South America was fairly close in line with the TTF and averaged $2.308/MMBtu.

Spot LNG prices remain much cheaper than oil. The ICIS Brent crude price averaged $7.628/MMBtu from mid-July to mid-August. Traders with long-term LNG import contracts index-linked to oil would be paying higher prices than the spot market, and could try to reduce volumes under their long-term contracts as far as possible. Latest official customs data from Japan shows that many cargoes were imported into the country in June at oil-linked prices around $9-10/MMBtu, when the average spot price for that month was only $2.098/MMBtu.

Over the summer the biggest attempt to re-adjust the global LNG market has come from US producers cutting back the output from their liquefaction trains. US plants have some of the greatest contractual flexibility for buyers to cancel unwanted cargoes.

One of the most obvious signals of the US cutbacks was the reduction in the amount of gas being fed into the plants from the US pipeline system to turn into LNG. At the start of 2020 feedgas into US plants was at record levels over 9 billion cubic feet/day (255 million cubic metres/day). That’s about the same amount of gas as is needed to supply the UK’s homes, power plants and factories for an entire day. By July feedgas had dropped back to a third of that level on some days, below 3 Bcf/day, as around 40-50 planned export cargoes per month were being cancelled.

However, feedgas levels are now picking up again, showing expectations of greater levels of cargo production heading into the winter. Feedgas was around 4.5 Bcf/day in mid-August, up some 1.5 Bcf/day from the lowpoint, though still only half the peak levels of early 2020.

Much global gas demand remains resilient despite the ongoing economic downturn, as gas is still required for essential services such as heating and electricity. Some markets are showing growth. China’s LNG demand in July 2020 was 5.39 million tonnes, up 16% from 4.65m tonnes in the same month of 2019. However, other markets are weaker. Japan, the world’s largest LNG importer, took in only 5.90m tonnes in July 2020, down 9% from 6.47m tonnes the year before.

If the upcoming winter sees mild weather once again, like the previous two years, and fails to significantly drain Europe’s onshore gas storage facilities, it may not take long for the short-term recovery in LNG to start to falter.

Reduced demand and lower prices this summer means that for many vessels there is no immediate urgency to deliver their cargoes. Some are seen waiting outside ports, circling in the ocean, or making several course changes.

The 170,000cbm Hoegh Gannet, for example, loaded a cargo from Algeria on 12 July but spent several weeks circling in the Med before eventually delivering it to Italy on 16 August. The journey could have been made in two or three days. 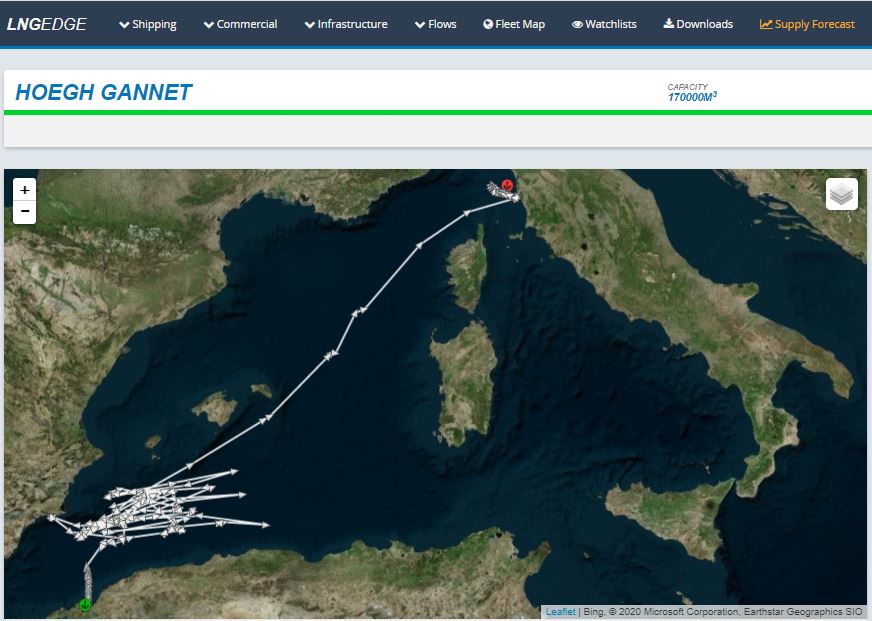 The 138,000cbm Iberica Knutsen, meanwhile, is delivering a cargo from Qatar to Italy, but instead of the usual quick route through the Suez Canal into the Mediterranean has taken a much longer and slower route down around southern Africa, then back up the western coast of the continent into the western end of the Med.

Russia’s Arctic Yamal LNG project continues to send cargoes through the Northern Seas Route across Arctic waters to east Asian consumers including China, South Korea and Taiwan. One Yamal vessel, the 172,000cbm Christophe de Margerie, also made a test-visit to Kildin Island near Murmansk in Russia, which could be used for future ship-to-ship transfer operations.

PREVIOUS POST We need to talk about Joe!
NEXT POST Spot LNG gains on Australia, US problems