Spot LNG prices continued to strengthen from mid-September to mid-October as the market takes an increasingly bullish turn on the back of unexpected production problems in the run-up to winter.

The ICIS East Asia Index (EAX) for November-delivered cargoes averaged $5.207/MMBtu, up 21% from the previous month, though still some 10% below the same period last year. The front-month ICIS TTF gas price for Europe averaged $4.314/MMBtu over the same period, tracing a similar upward path, though remaining at a discount to the EAX. 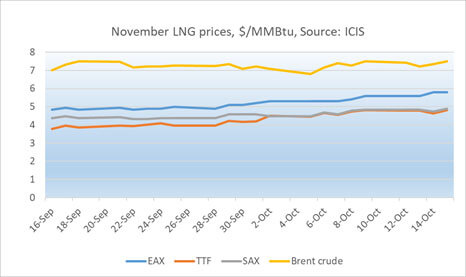 The second 5.2 million tonnes per annum train at Australia’s Gorgon LNG plant remains offline for repairs to cracked propane units, with similar repair work likely to be needed next year on the first and third trains, which were built to a similar design. In the same country, Shell has said that the 3.6mtpa Prelude floating production plant will not be back in action this year, having shut after an electrical failure in February. Initial attempts to restart output were made in September, but then delayed.

In the US hurricanes have continued to disrupt production in the key Gulf of Mexico production hub. The 13.5mtpa Cameron LNG plant was still struggling to return to operation after Hurricane Laura in late-August when Hurricane Delta swept into the area in October, causing further disruption to shipping channels and power supplies. Feedgas into the 22.5mtpa Sabine Pass plant also fell back, while the 5.3mtpa Cove Point was out from late September to early October due to pipeline maintenance.

In Europe the region’s only production plant at Hammerfest in Norway suffered a fire at the end of September shortly after returning from a maintenance outage. The 4.3mtpa plant could be closed for a lengthy period, as the incident was potentially a serious one, and safety regulators will want to carry out a full investigation. Operator Equinor has posted a notice suggesting the plant will be out until the end of 2020, but it’s likely too early to know for certain how long investigations will take.

Chinese demand grows
The unexpected outages come as the market is heading into the northern hemisphere winter, which is always the key demand part of the year as it includes winter for the East Asian importers such as Japan, China and South Korea, as well as winter for the European gas market.
As well as seasonal increases in demand, countries like China are continuing to show long-term growth. The coronavirus pandemic pushed demand during first quarter 2020 below the previous year’s levels, but since then demand is back to showing a steady rate of annual increase from 2019. China’s third quarter demand of 17.2 million tonnes was up 17% from the year before. The country has announced plans ahead of this winter to convert an additional 7 million homes from coal-fired heating to gas-heating to improve air quality. 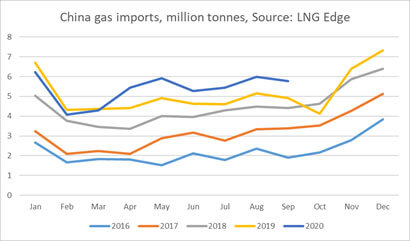 Although the market seems fairly stuck in bullish mood, there remain risks to the downside. If the winter is mild, like the previous two, this will reduce heating demand and bring down prices. As the US moves towards the end of the local hurricane season, there is potential for some rapid increases in output as plants that were shut down over summer all turn back on at the same time. There are substantial volumes of gas in underground storage in areas including Europe and Ukraine, and there could yet be further economic damage from new coronavirus lockdowns.

Another source of growing demand for next year is Croatia. On 13 October the floating storage and regasification unit that will be used for the country’s planned Krk Island import project arrived at its new home after a journey from the shipyard in China. The FSRU, named the LNG Croatia, is expected to import its first cargoes in early 2021. 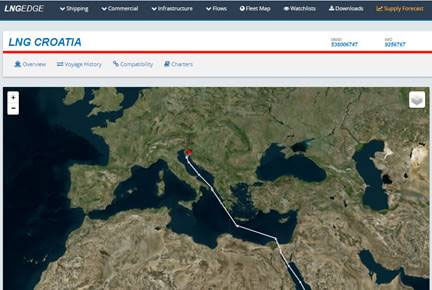 Traffic had to keep clear of Poland’s port of Swinoujscie in mid-October as the Polish navy worked to defuse a World War II bomb found in the shipping channel. The bomb exploded during the attempt, but none of the divers were harmed and there was no damage to the LNG terminal, with the shipping channel declared safe for traffic again afterwards.

In longer-term news, Qatar Petroleum booked all the spare capacity put on offer by the UK’s Isle of Grain terminal for 2025-2050. The company’s 7.2mtpa capacity booking will partly replace expiring contracts that supported the original terminal construction in 2005 and also support expansion with a new storage tank.

Qatar’s booking at Grain follows similar moves to book up the spare capacity offered by France’s Montoir terminal for 2021 to 2035, and by Belgium’s Zeebrugge terminal until 2044. This gives Qatar an even stronger regas position to add to its existing assets including ownership of the UK South Hook terminal and long-term contracts to supply Poland’s Swinoujscie terminal and Italy’s Adriatic terminal at Rovigo.

Qatar plans to expand its production from 77mtpa now to 126mtpa by 2027 and is looking to secure the capacity that will give it options on where to deliver its new cargoes in the future. The country’s low cost gas production, integrated approach and strong financial position is allowing it to capture an increasing share of the future LNG market in the mid-2020s and beyond as some developers in other countries such as the US struggle to raise finance.