Spot LNG Prices strengthened in the second half of October on ongoing outages, before softening in the first half of November on increased production. The ICIS East Asia Index rose from $6.25/MMBtu on 16 October to a high of $7.20/MMBtu, before falling back to $6.40/MMBtu on 13 November.

The front-month price, for cargoes delivered in December, averaged $6.185/MMBtu across the period, up 29% from the average for November-delivered cargoes. The price was also up 8% from the same period last year. 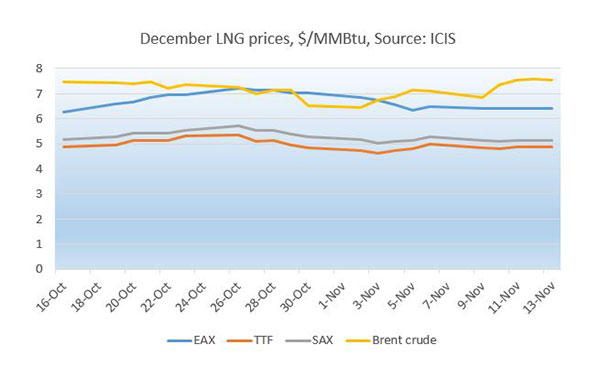 Outages in Australia and Norway have driven the market higher. Australia’s three-train 15.6mtpa Gorgon LNG plant has had its second 5.2mtpa train out since summer to repair cracks on propane kettle units. Operator Chevron says that it hopes to have production restarting at train two by the end of November, but it will then need to check and possibly repair trains one and three in following weeks.

Norway’s 4.3mtpa Hammerfest plant shut at the end of September after a fire. It may not return to action until October 2021, according to the latest estimates from operator Equinor. The operators and authorities need to carry out safety investigations.

Malaysia’s 29.3mtpa Bintulu plant has also experienced some issues and market sources have indicated this could continue to affect loadings in December.

However, the US has been rapidly increasing its production levels in recent weeks after hurricane disruption to shipping canals and power supplies ended. By mid-November the amount of feedgas going into US LNG plants was at all-time record levels over 10 Bcf/day. Although the world’s biggest LNG producer Qatar has diverted some of its cargoes away from Europe to Asia, the increasing Atlantic production allows replacement supplies to go to Europe, and the combined effect has been a downturn in prices.

For example, the 210,000cbm Duhail from Qatar was on an initial heading to the Suez Canal, indicating a delivery to a European consumer, when it turned around to head back east instead. It later began signalling a course to Dailian in China. 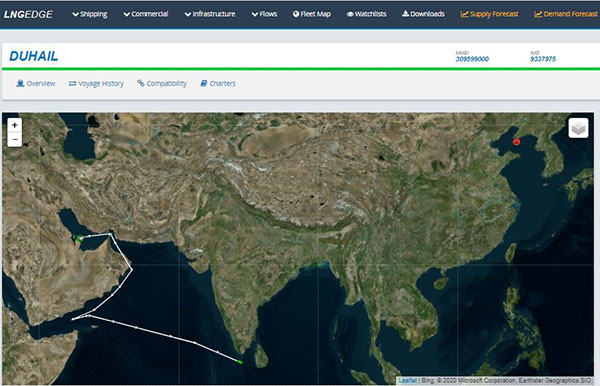 The ICIS TTF price, the benchmark for European gas markets, averaged $4.954/MMBtu from mid-October to mid-November. That was some $1.751/MMBtu below the EAX price, explaining the diversion of Qatari supplies from Europe. However, it offered a sufficient premium to the US Henry Hub gas market to support the increase in US LNG production.

The ICIS South America Index (SAX) averaged $5.290/MMBtu, offering a slightly better price than Europe, but again below the East Asia price. Demand from South America could fall over coming months as the region moves into its summer as Europe moves into winter, although there has been a recent uptick in demand from Brazil due to lower hydropower availability.

The strong recent gains in the EAX price pushed it up to parity with the Brent crude price at times. This usually acts as a ceiling on spot LNG prices, as once LNG reaches the same price as oil, industrial customers can switch to burning oil instead of gas, which brings more potential energy supply into the market.

The recent increase in US production comes as plants that had turned down their output over summer turn back up, and as new production trains enter the market. The third 4.5mtpa train at the US Corpus Christi plant, targeted for 2021, has already started taking in feedgas and should start producing LNG in coming weeks, according to operator Cheniere. It is expected to reach substantial completion in the first quarter of the new year.

There are some other new projects on the near horizon. The market is waiting for the start-up of a new 0.9mtpa train at Russia’s Yamal LNG plant. This is a test for new technology, and much smaller than the three previous trains at Yamal LNG. Meanwhile Malaysia’s PETRONAS is planning to start up a second floating production unit, known as PFLNG 2, with capacity of 1.5mtpa.

However, Shell’s 3.6mtpa Prelude floating LNG project offshore Australia has not yet restarted production. It halted output in February 2020 after an electrical fault.

The resurgence of US output and other new projects could see spot prices ease further over coming weeks. However, as is always the case in gas markets, the weather remains of vital importance, with a wide range of demand possible in Europe and Asia under mild or cold winter scenarios.