As of mid-August the ICIS TTF gas price for Continental Europe, the UK NBP and the East Asia Index were all soaring higher. The TTF and NBP front-month were around $16.50/MMBtu, with both contracts having reached all-time highs (in their original currencies). The TTF has beaten its previous high reached in mid-2008, when crude oil had hit $147/barrel and just before the financial crisis of that year. The NBP has now exceeded, in its original currency, the 115 pence/therm highs set in November 2005, when the UK faced a cold winter with declining North Sea reserves, before it had completed new pipeline links to Norway and the Netherlands that would boost imports from 2006. 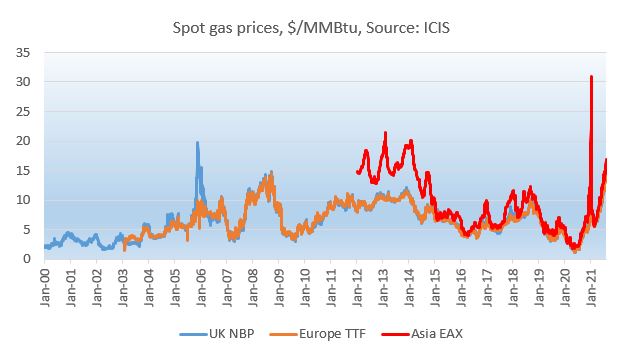 The ICIS EAX was at record levels over $30/MMBtu in January this year, when Japan was paying high prices for last-minute cargoes of fuel amid cold weather and electricity shortages. Mid-July EAX levels around $17.50/MMBtu are still extremely high in historical terms. January’s price-spike was only a short-lived winter event, whereas the current market strength comes as part of a sustained rally, and in the lower-demand summer.

Spot gas prices in the key consumer regions of Europe and Asia, which take the vast majority of global LNG, are now all in the $15-20/MMBtu price range last seen in Japan during 2012-2014, when that country had to import vast amounts of extra LNG for power generation after the country’s nuclear power fleet was shut down following the Fukushima disaster.

These record levels are filtering through into consumer bills. For example, British energy regulator Ofgem announced in early August it would increase the price cap that controls the bills of 15 million customers from October 2021 in response to the wholesale market gains. The winter price cap is based on the spot market during February-July 2021, and if the wholesale market remains strong across the rest of August 2021-January 2022 there could be further increases for consumer tariffs next summer.

There is little immediate prospect of Europe’s storage being filled. As of mid-July Europe’s underground gas storage facilities for pipeline gas held around 29 billion cubic metres less gas than the year before. That’s equal to around 21 million tonnes. The global LNG market produces a little over 30m tonnes each month, but it is not possible to direct that all to Europe. 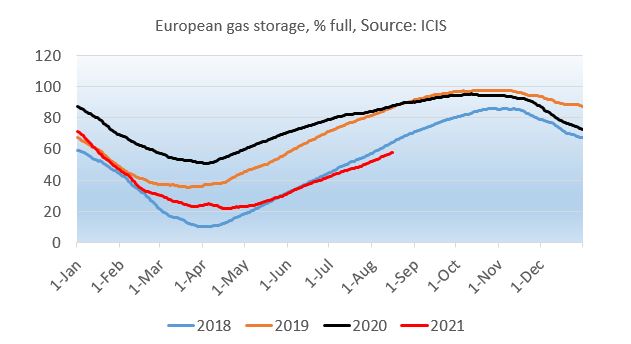 Storage is only slightly lower than it was at the same time in 2018, so the current situation has some comparisons. However the 2018/19 winter proved relatively mild, so the stocks built up in 2018 were not heavily drawn down in early 2019. The storage level may not be a concern if winter 2021/22 is mild, but would be much more serious if it is cold.

Apart from the weather, continued economic growth and fuel-switching in China has helped to boost global demand. There were some signs in July 2021 of a slight slowing in the rate of growth, however, possibly a response to the gains in prices.

Chinese LNG imports in July 2021 were around 14% higher than July 2020, according to ship-tracking data from ICIS LNG Edge. This was down from year-on-year increases of around 25% in May and June 2021. 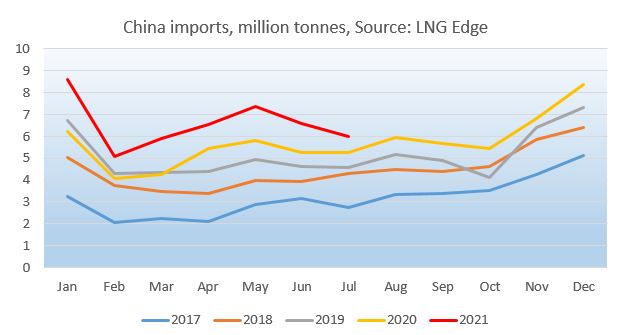 Spot gas prices have broken through the traditional oil-price ceiling in recent weeks. Normally spot gas does not rise above crude-oil parity, as when the prices are the same industry and generators can switch from burning gas to oil, and this brings extra supply into the market.

However, with Brent crude averaging around $12.50/MMBtu over the past month, it is now far below spot gas. The ICIS EAX for a September LNG cargo to Asia averaged $15.124/MMBtu during its mid-July to mid-August assessment period. 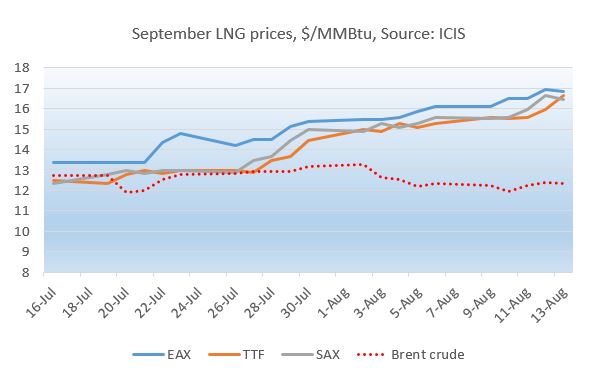 The market has been looking to Russia as a potential source of extra gas that could enter the global market to reverse some of the recent bullish pressure. A fire at a key production plant on Russia’s Yamal pensinula was reported in early August, however, raising concerns over availability. Flows of Russian gas to western Europe as measured at the Mallnow border point on the Polish-German border dipped significantly over the first half of the month.