Spot LNG prices remain firmly in bullish mood, with little prospect of an immediate easing of tight market conditions. Low storage levels in Europe, growing demand from China and Brazil and maintenance in Australia are all supporting the market.

Threats to the upside include any heatwaves that occur over summer in east Asia prompting increased electricity demand for air conditioning, and any disruption to US exports from the Gulf of Mexico during the hurricane season later this year. There are few obvious downside risks in the near-term. The US Sabine Pass terminal will open a sixth 4.5 million tonnes per annum train by the end of the year, and the 10.0mtpa Calcasieu Pass project is also expected to be loading cargoes by the end of the year, but they should take a few months to ramp up to full output, meaning their full impact won’t be felt until well into 2022. 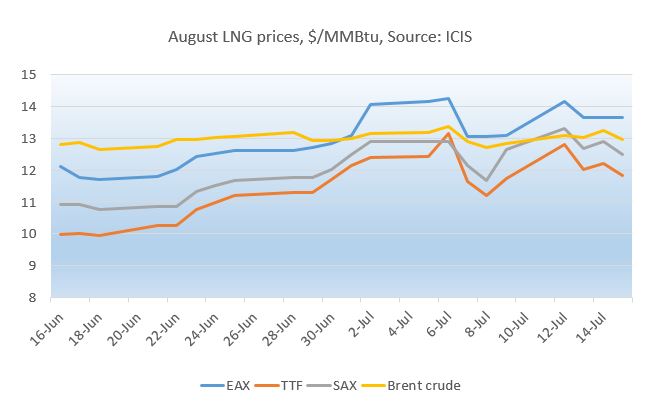 Front-month ICIS TTF gas prices for Europe hit record levels over $13.00/MMBtu in early July, while the ICIS East Asia Index (EAX) traded over $14.00/MMBtu. While that was below the $30.00/MMBtu prices seen for east Asia during a cold January earlier this year, it was much higher than previous expectations for this summer.

It was also a huge change from the low prices seen at the same time last year, after a mild winter that year, and when demand was reduced by the pandemic. The average price for an August delivered cargo to east Asia this year was $12.952/MMBtu, more than six times the $2.180/MMBtu average for the same period last year.

Europe’s storage entered the winter lower than last year after a cold winter, and there was little progress in re-filling storage during April, traditionally the first month of the injection season. As of mid-July Europe’s onshore gas storages held around 35 billion cubic metres less pipeline gas than the year before, the equivalent of around 25 million tonnes of LNG. 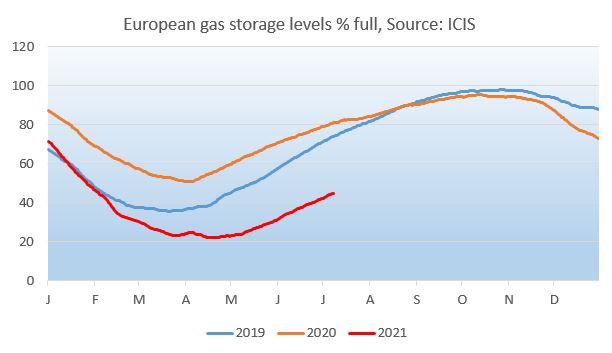 Restocking has been slow as Asia competes against Europe for cargoes and as debate continues over whether Russian can ship pipeline gas to western Europe using the Nord Stream 2 pipeline. The pipeline has faced US sanctions raising questions over whether it can be used to deliver gas, or whether Russia would need to use alternative routes if it wants to supply more gas to Europe.

Demand, meanwhile, has been growing in east and south Asia. The fastest growing country remains China, whose imports in April, May and June were all up by around 20-25% from the previous year. China imported a total of 20.4m tonnes of LNG in Q2 2021, up 3.8m tonnes from the year before. Total demand for east Asia in Q2 2021 was 50.7m tonnes, up 13% on the year before, with Japan, South Korea and Taiwan all also rebounding from 2020’s pandemic-hit levels. 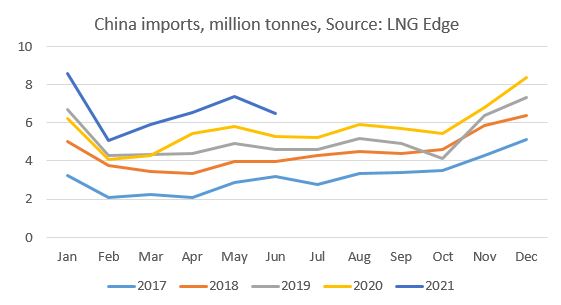 Australia, one of the key producers for the east Asia market, has had relatively heavy maintenance in recent months. It exported around 2% less in Q2 21 than the year before, according to LNG Edge ship-tracking, as work continued at facilities including the 5.2mtpa Gorgon train three. More recently there have been reports of corrosion being found at the North West Shelf project, although the immediate impact is unclear.

Closer to Europe, the 4.3mtpa Hammerfest LNG plant remains shut after a fire last September. Although it had earlier been hoped to return the plant to operations in October 2021, the latest estimate is for a March 2022 restart, according to operator Equinor.

Brazil imported around 1.5m tonnes of LNG in Q2 2021, compared with only 0.1m tonnes in the same period last year. The country has been pulling in more cargoes of LNG for power generation after low rainfall reduced its hydroelectric output.