This article was written by Harriet Roberts. It discusses the findings of the ICIS European Energy Mid-Year Outlook 2019

European wholesale gas and power prices are set for a bearish third quarter, underpinned by strong supply at both a continental and global level, while a weak outlook for the European coal and Brent crude benchmarks also feeds into the overall sentiment.

Traders will continue to pay close attention to the global LNG market with Europe set to remain an attractive destination for cargoes.

These are the findings, published in the ICIS European Energy Mid-Year Outlook 2019, of ICIS reporters and analysts covering the European gas, power and carbon sectors alongside the global crude oil and LNG markets.

The outlook raises questions about some key European energy contracts delivering during the calendar year ahead. While the value of the 2020 delivery product at the benchmark gas market, the Dutch TTF, has been in considerable decline since the start of last winter in line with the overarching bearish sentiment, the equivalent electricity benchmark, the German power front year, has largely retained its value despite tracking a volatile path. 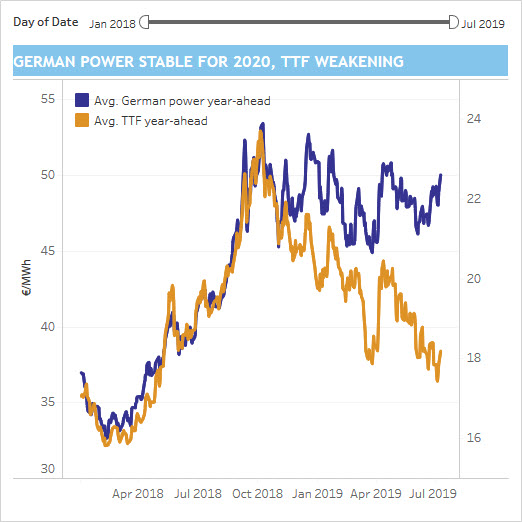 This could imply, with gas- and coal-fired power plants paying less for their fuel, that power supply could increase, meaning the price of electricity in the benchmark German market for 2020 consumption could have room to drop before delivery begins.

The fundamentals across Europe underpin bearish sentiment among energy markets. In the third quarter of 2019, upward movements on the Dutch will be capped by the LNG influx in Europe. The Q4 2019 product averaged a premium of €5/MWh over the Q3 contract as LNG arrivals kept the bearish pressure on Q3.

As for German power, spot prices are unlikely to record significant upside during Q3 due to robust nuclear energy supply coupled with a bearish outlook for coal as well as gas prices.

Continental gas prices crumbled under the weight of heightened LNG supply during the first half of the year and losses in gas contracts have pressured coal prices as the two compete in the German power generation mix. Considering these variables and the strong confidence in nuclear availability, German power prices will be relatively low with price spikes unlikely.

Overall, gas prices in Europe will remain bearish. Gas in European stores has never been as high for the time of the year and high stocks will offer consistent pressure to British prices as the summer progresses.

There is also a broadly bearish outlook for power prices heading into the third quarter outside of Germany. This is again underpinned by comfortable French and Belgian nuclear availability pressurising power markets, with no present signs of the disruption seen during previous summers.

Fundamental market data looks supportive for the European carbon price, but policy and market risks remain high on the agenda of market participants. The main risks for the market include a hard Brexit scenario in the UK.

And finally, the LNG market looks set to continue its bearish streak in the third quarter. If spot demand does emerge, it is likely that the Asian market premium will grow and pull some flexible cargoes away from the Atlantic basin.