Spot LNG held largely stable around $3.00/MMBtu levels from mid-February to mid-March, but a huge crash in the global oil markets narrowed the gap between oil and gas prices substantially.

The ICIS East Asia Index for April LNG averaged $3.066/MMBtu across the period, representing the cost of a spot cargo to Japan, China, South Korea or Taiwan. The ICIS Dutch TTF front-month for European gas averaged $2.931/MMBtu, while the South America Index for LNG averaged $2.835/MMBtu, all close in line.

Crude oil markets saw a huge fall after OPEC members including Saudia Arabia and Russia failed to agree output cuts to reduce supply in line with the fall in demand caused by the coronavirus pandemic. Brent crude dropped from around $10/MMBtu in mid-February to below $6/MMBtu in mid-March, reducing its premium to spot LNG from $7/MMBtu to $3/MMBtu.

The shift in the market has the potential to substantially reduce the price of the vast amount of global LNG that is sold under long-term, oil-linked contracts. As oil and gas prices narrow, the incentive to switch from an oil-indexed contract to spot market purchases also reduces.

However, for a significant impact, crude oil prices will have to remain at low levels for several months, as oil-indexed contracts are typically priced according to the average oil price over a period of six to nine past months. So low oil prices for a single day or week would not significantly reduce the contract price. It’s also important to note that some contracts have ceilings and floors in place, known as S-Curve pricing, that are designed to reduce the impact of an extreme rise or fall in oil prices.

That said, an immediate rebound in the oil markets looks unlikely, and producers who had been counting on their oil-linked contracts to shelter them from the effects of low spot gas prices may have to prepare for lower profits on their long-term contracts too.

The market had been watching closely for news of cargo cancellations, and in late February it arrived, with US Cheniere confirming customers had requested two cargoes to be cancelled in April. The company said, however, that it could still lift the cargoes itself, and that it was a small number out of the 40 cargoes it produces each month.

The market, however, was crawling slowly higher by mid-March, despite the growing negative economic sentiment, perhaps because the news of cancellations indicates some parties are starting to take action to reduce the length in the market. The EAX rose to $3.475/MMBtu on 13 March, from $2.600/MMBtu on 17 February. With near months at the US Henry Hub holding below $2/MMBtu, the prompt spread of around $1.50/MMBtu looks sufficient to sustain cargo sales to Asia. 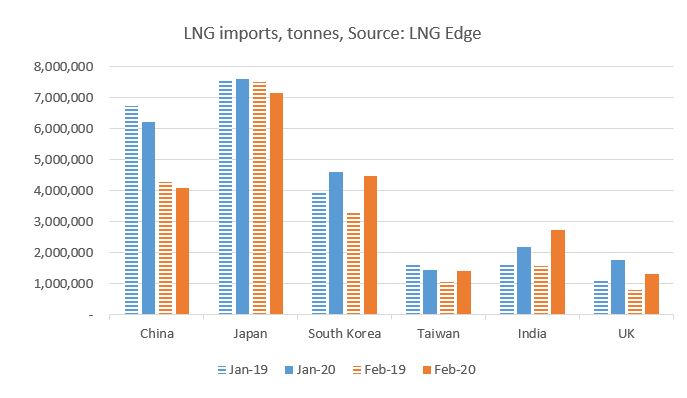 Global demand is not actually falling compared to a year ago, it is just failing to keep pace with the increase in supply. Japan’s LNG imports in the first two months of 2020 were little changed from the previous year, while South Korea’s increased, as the country raised the proportion of gas-fired power generation in its electricity mix. India has also come into the market more strongly in 2020, taking advantage of lower prices to procure extra gas.

China, however, did see year-on-year decreases in its LNG imports in both January and February 2020, against pre-virus expectations for continued growth. Extra supplies in the global market have been directed towards the liquid spot-trading region of Europe, resulting in an upturn in imports into countries like the UK, and downward pressure on European spot gas prices.

The UK in particular has not been able to import quite as quickly as it might have wanted, however. An unusually long period of stormy weather across February and March, including Storms Ciara, Dennis and Jorge, slowed operations at the Welsh port of Milford Haven, home of the UK’s Dragon and South Hook LNG terminals.

The impact can be seen in the stocks data for the UK’s LNG terminal storage tanks. Stocks at Dragon and South Hook fell sharply during the stormy weather, as tankers were unable to berth at the jetty to unload their cargo into the beach tanks. A similar effect was also observed during stormy weather in December 2019. The UK’s Isle of Grain terminal was not affected, as it is located in the Thames Estuary, on the opposite coast of the country. 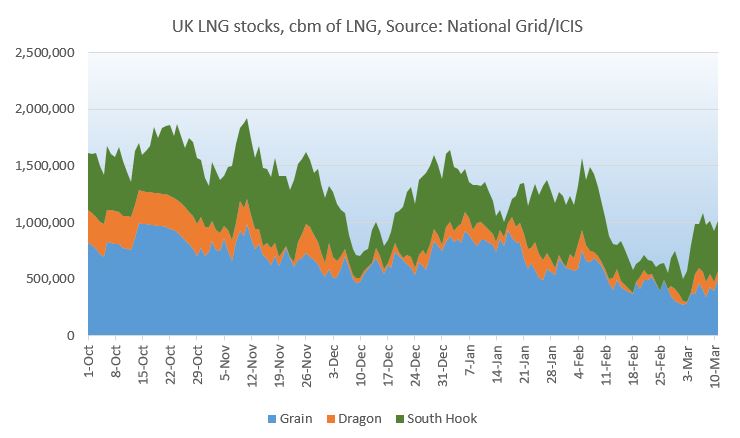 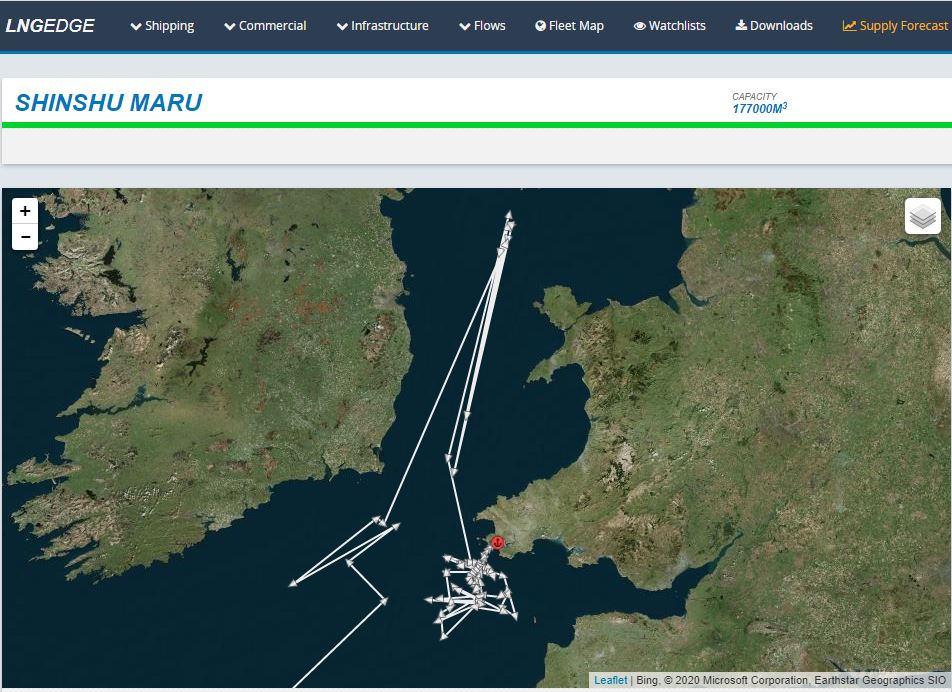 The delayed deliveries were not a significant problem for the UK gas market, as the winter has been mild and prices low. Delays might be a greater cause for concern if they occurred at a time of wider system stress, such as during an unexpectedly severe cold winter, or if such stormy conditions were to become more frequent in future years.

With global supply still strong and new US production trains such as Cameron train three and Freeport train three due into commercial service this year, availability of LNG seems a fairly distant problem at present. The industry will instead be watching to see how producers cope with the changed economic circumstances, including potential financial restructuring of the US shale oil and gas industry that has provided the feedstock for the country’s liquefaction plants, and delays to final investment decisions on the new projects expected to start up later in the 2020s.