LNG traders are questioning how long a surge in Asian spot prices can last, after dramatic price increases caused by unexpected outages, strengthened by a lack of shipping availability to close the widening price differential between Europe and Asia.

Although outages remain, US production is reaching record levels, and Europe is breaking its link to Asia. There is talk of cargoes being cancelled from US production plants in February, as they were during last summer’s oversupply. Though prices in Asia are attractive, transporting US cargoes there with limited shipping and a congested Panama Canal is challenging. Some ships have been waiting eight or nine days to transit the canal.

The ICIS East Asia Index for front-month January averaged $7.761/MMBtu, rising 16% on the month, and up 41% on the same period last year. The gains were particularly sharp in mid-December, with the new front-month February assessed at $12.125/MMBtu on 17 December.

Outages in Australia in particular have meant a loss of cargoes close to the key demand centre of east Asia. Australia’s 15.6mtpa Gorgon LNG plant has returned its second train to service after fixing cracks in propane kettles, but is now taking down the other two trains over coming weeks to check them for similar issues and make any necessary repairs. 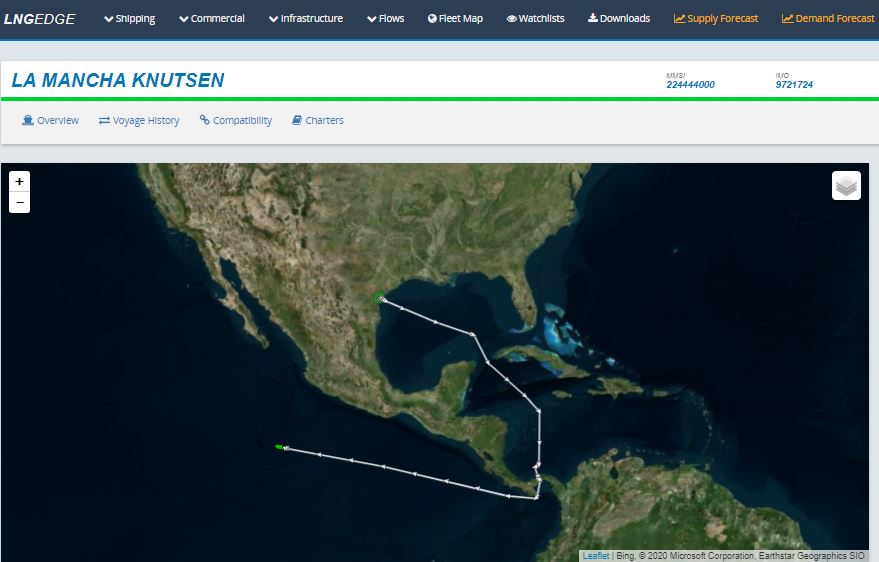 Elsewhere in Australia, Shell’s 3.6mtpa Prelude floating plant remains out since February, while there were some offshore production problems at the gas field that supplies Chevron’s 10mtpa Wheatstone plant. Further away, Norway’s 4.3mtpa Hammerfest LNG plant will be shut for a year after a fire in September, while Algeria’s Arzew plant loaded no cargoes in first half December due to some issues, though the Lalla Fatma N’Soumer tanker did pick up a cargo by mid-month.

US LNG production is reaching record levels with feedgas rates to liquefaction plants over 11 billion cubic feet/day (312mcm/day). The Corpus Christi plant is starting up its new third 4.5mtpa production train. The operators said they loaded the first cargo from the train onto the 176,000cbm La Mancha Knutsen on 7 December. 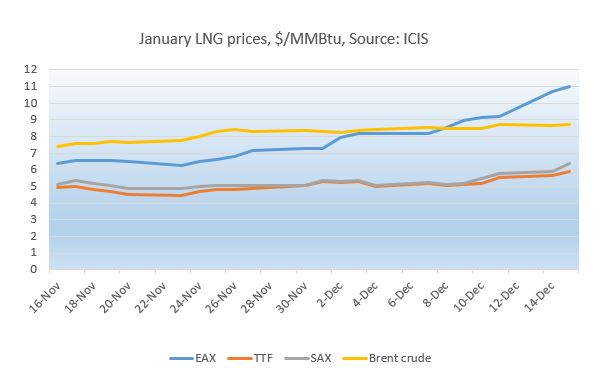 However, sending US cargoes to Asia to replace Australian cargoes means that each tonne of LNG has to travel a much longer distance, putting a strain on the shipping market. Prompt Atlantic charter rates for a modern vessel were assessed at up to $185,000/day, compared with $35,000/day in late August. For much of mid-December there were no available vessels reported for hire in the Atlantic at all.

The lack of shipping availability means that traders can’t take advantage of the price spread between Europe’s TTF hub and the EAX. In mid-December the January TTF price was just under $6/MMBtu compared with $11/MMBtu for the EAX. This means that an average cargo with around 3.2 million MMBtu onboard would be worth $35.2 million in Asia compared with $19.2 million in Europe. Traders would have liked to reload LNG volumes stored in tanks in Europe to send to Asia for a $16 million gain, but could not find the ships to do so.

Though the gas market is increasingly globalized, markets can split apart when the physical links that hold them together reach capacity. European hubs can see prices diverge when pipelines are fully booked, while the LNG market can see regions break apart when shipping runs out of spare vessels.

Although new ships continue to enter the market, there won’t be a significant short-term increase. The Panama Canal may make changes to speed up LNG transits next year, but again this is unlikely in the very short-term. Work at Australia’s Gorgon plant is likely to continue for some weeks yet. But whether Asian markets remain under stress will mainly be determined by the weather.

Some Asian buyers may have done the bulk of their winter buying now and there are signs of some buyers being wary of further purchases at recent high levels. Traders uncertain of whether they need further cargoes for late winter may try to wait before buying more in the hope that the weather is average and stocks last longer until prices fall.

It’s worth noting that while Asian spot prices of $12.00/MMBtu represent a large increase from summer’s extraordinarily low levels of $2.00-3.00/MMBtu, the majority of Asian LNG purchases are still made on long-term contracts with the price linked to oil. Customs data shows that many Asian customers were paying long-term oil-linked prices around $8-11/MMBtu even when the spot price was low in summer. Nor will the majority of current LNG cargoes being delivered into Asia on oil-linked contracts have their prices affected by the spot market surge.

This is different from Europe, where most long-term pipe or LNG import contracts would now have their prices linked to a spot price, such as the ICIS TTF.