Spot LNG prices in east Asia have rocketed higher during January, with trades seen over $30/MMBtu. That compares with levels around $11/MMBtu in late December, and as low as $2/MMBtu during the oversupply of summer 2020. What does this mean, and how long are such high prices likely to continue? 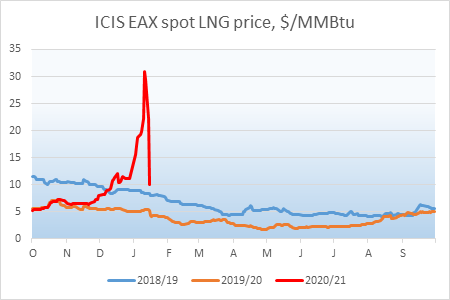 The high prices came in a few spot trades for near-term delivery to east Asia. Japan in particular needed to buy extra fuel for power plants due to cold weather and reduced nuclear power output, which were driving price spikes in the Japanese electricity market. The winter has also been cold in China, driving heating demand higher. On the supply side, there remain outages at key Pacific LNG producers, including Australia’s Gorgon LNG plant, which currently has its first 5.2 million tonnes per annum train shut to repair kettle cracks, after carrying out similar work on train two last year. Train three is expected to need work too.

The situation in the Pacific meant the market needed to draw on extra cargoes from the Middle East and the US. Qatar has sent more of its flexible volumes to Asia, meaning the UK has now gone over 76 days without a Qatari LNG cargo, a record gap since Qatar started regular flows to the UK over a decade ago. The US is producing LNG at record rates, with feedgas up to 11 billion cubic feet/day, including from the Corpus Christi plant where a new third 4.5mtpa train is now starting up. But sending supplies from further afield puts extra strain on the shipping market. The Panama Canal has become congested, resulting in delays and longer voyages, and spot charter rates seen rising as high as $350,000/day, compared with $30,000/day last summer.

Much LNG is still delivered long-term

The high spot-price trades don’t mean that all LNG to Japan and China is trading at such high levels, or that energy bills for householders will increase by the same proportion. It’s only a few last-minute cargoes secured to meet extra unexpected demand trading at such high levels. The International Gas Union’s survey for 2019 showed that at least 60% of LNG imports to the Pacific are priced on oil-linked contracts, with a higher proportion for Asia. Even spot cargoes bought in late December for February delivery could have cost $11.00/MMBtu, despite February cargoes trading a few weeks later over $30/MMBtu. The effect on consumer bills will depend on the weighted average of a company’s overall supply portfolio, as well as the effects of any government controls.

There are few long-term contracts in Asia priced according to the spot LNG market prices, so the spot price leaps will have little impact on long-term contract prices. This is different from Europe, where the majority of LNG supplies would be based on Europe’s onshore spot gas price markets, such as the Dutch TTF and UK NBP. Those markets have not increased to the same levels as Asia.

Nevertheless, high prices do push average supply prices higher, and represent some significant profits for sellers. An average-sized tanker with 3.4 million MMBtu onboard would be worth $102 million at $30/MMBtu prices in Asia, compared with $6.8 million at last summer’s low spot prices. That $6.8 million price would also have been mostly cancelled out by production and shipping costs, whereas higher prices leave higher margins.

The previous two winters, during 2018/19 and 2019/20 saw fairly mild weather. The market was well supplied as a result of new production facilities coming onstream in recent years in Russia, Australia and the US. Further new production came onstream in 2020, including at the US Cameron and Freeport facilities, and given a third mild winter in a row, it would not have been surprising to see spot prices of around $5/MMBtu this winter, similar to last year.

It turned out, however, that this year the winter was cold, and the market suffered a few more outages than might have been expected, close to the key centre of demand. The ability of a change in the weather to shift the market from $5 to $30/MMBtu price levels shows the sensitivity of the market to change, and possibility for volatility. Once a utility company is faced by the possibility of electricity blackouts, and resulting costs of lost supply, the price it is willing to pay jumps sharply.

Electricity markets, which have to be balanced in real-time, have always shown some spectacular price spikes on individual hours of peak demand, such as in the evenings when households and businesses are both in operation. Both Japanese and European electricity markets have recorded some major spikes in recent weeks. This is because demand can’t be shifted even an hour later in the day, at least until smart grids and connected appliances become more common, like washing machines that only turn on at night. 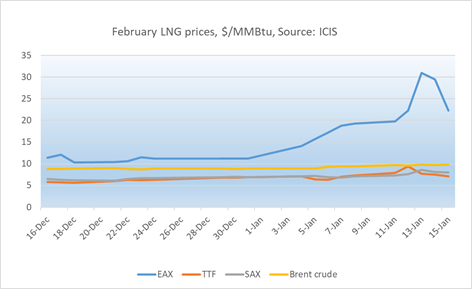 The price spikes in LNG this month are similarly caused by a lack of flexibility in the market. There was an urgent need to fuel power plants and meet heating demand during immediate cold weather, but while there was a reasonable amount of gas in the global market as a whole, there were constraints on the ability to move it to the region of high demand fast enough, and not enough already stored in place. Unless there is a greater pool of surplus shipping to call on at times of stress and more seasonal storage capacity in key consumers such as China and Japan, the market could remain prone to large short-term moves in spot prices.

While the EAX spot price for Asian LNG has now spent several weeks running over the Brent crude oil price, traditionally the ceiling for spot LNG, Europe’s TTF spot gas price has remained below the oil price and far below the EAX. Europe can call on pipeline gas supplies as well as LNG, and countries such as France, Italy and Germany have larger onshore gas storage capacities relative to their annual demand than typical in Asia.

As there is no overall shortage in the global gas market, just a problem with meeting immediate peak demand, prices were always likely to fall back quickly once the peak was passed. Spot prices in Asia for March delivery are considerably lower than the highs for February, with the EAX price for March set at $10.00/MMBtu on 18 January. There has been some talk in the market that US producers could have to cut back some of their output soon as demand may not be high enough for all their cargoes to be needed over spring and summer. 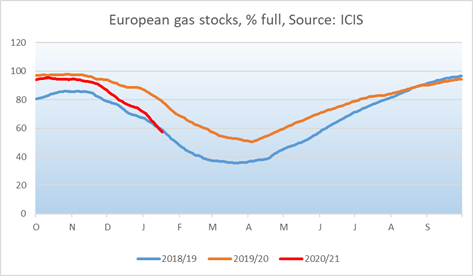 However, the colder weather this winter, and the diversion of cargoes from producers such as Qatar away from northern Europe means that there has been a greater draw on Europe’s onshore gas storage than last year. This has not been unusually high, as stocks are still at the same level as two years earlier. But it does mean that there will be a greater need to replenish storage over summer 2021 than there was in summer 2020. That will offer some hope to the US producers who had to cut back their output drastically during summer last year that cuts, if needed, should at least be smaller this year.