Spot gas markets in Europe and Asia have re-aligned after splitting apart during last month’s cold weather and price spikes in east Asia. But it may be a little too early to call winter over, as recent developments in the US prove. Meanwhile, summer could see some extra support from storage re-injections, while there is the potential of markets diverging again should summer price spikes emerge. 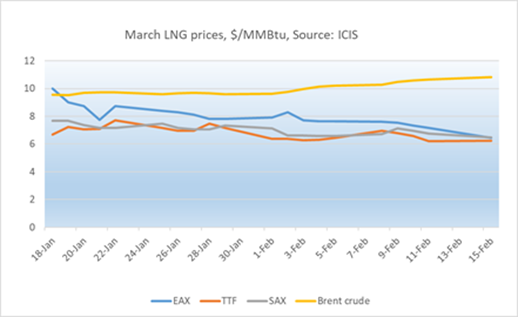 The ICIS East Asia Index and European TTF spot gas prices have re-converged in mid-February, with the EAX at $6.45/MMBtu on 15 February and the TTF at $6.242/MMBtu, just twenty cents below. A month earlier they had been $3.30/MMBtu apart, with the EAX at $10/MMBtu and the TTF at $6.695/MMBtu, while earlier in January a handful of spot Asian LNG trades were heard over $30/MMBtu. January’s extreme cold weather and power supply shortages in east Asia have come to an end, and the market’s attention has been on cargoes for delivery in March, when demand should be lower.

Northwest Europe, meanwhile, had its own week of cold weather during February 8-14. The UK saw a cold snap and gas heating demand at levels not seen since March 2018’s “Beast from the East” as cold winds blew in from the Baltic. However, there was plentiful gas available from storage facilities and the country was receiving regular cargoes of LNG from the US and Russia’s Yamal LNG project even before the cold arrived, so there were no particular problems in meeting demand.

That was even despite the fact that the UK has not had a delivery from its traditional main LNG supplier Qatar since 3 November 2020. The Middle East producer has been targeting its flexible volumes towards higher priced markets in Asia instead.

The EAX for March averaged $8.001/MMBtu during the mid-January to mid-February period as the front-month assessment. This was down 50% from the average EAX price for February, but up 122% from the average March price last year. The downturn in EAX spot prices across the month brought spot LNG back below crude oil, which LNG had unusually broken above during January’s price spikes. Normally oil acts as a ceiling for spot LNG, due to the ability to switch from LNG to oil when the markets converge.

Cold weather in the US

Like Asia and Europe the US has also suffered some unusually cold weather, with a mid-February cold snap sending temperatures plummeting across the country down to the Gulf Coast. On Friday 12 February prompt gas prices at some Mid-Continent gas hubs reached an enormous $600/MMBtu, while Texas introduced rolling electricity cuts to manage demand as ice storms knocked out wind power generators.

The severe conditions in the US act as a reminder, if any were needed, that the northern hemisphere winter is not yet over. While Europe is forecast for some warmer weather in mid-February, 2018’s “Beast from the East” only occurred at end February/early March, while in 2013 cold weather surprised the market at the end of the season with the UK experiencing its coldest ever Easter on 31 March.

The LNG market could not immediately mobilise to help the US with its cold weather, as it was too short-term to deliver LNG, and in any case the US system is now geared up more for exports than for importing gas into the centre of the country. There were some short-term dips in feedgas supplies to LNG export plants, with drops at Sabine Pass, Corpus Christi and Freeport, although these may also have been linked to foggy weather affecting shipping and some planned pipeline works.

The cold snap was not pushing up March prices to the same extent. The front-month Henry Hub price remained around $3/MMBtu, meaning there are still profitable margins for exporting from the US to Europe’s TTF or Asia’s EAX markets.

A new project has entered the market, with Malaysia’s PETRONAS celebrating first production from its 1.5 million tonnes per annum PFLNG Dua unit on 13 February. The company expects the first cargo to be delivered to customers in March. This is the company’s second floating LNG production unit. Its earlier project, PFLNG Satu, was the world’s first floating LNG producer.

Australia’s 3.6mtpa Prelude floating plant, which was offline for most of 2020, remains in action and has produced three cargoes so far this year. Meanwhile, Australia’s Gorgon LNG plant is working to repair propane kettle cracks on its first 5.2mtpa production train, having fixed the second train last year.

In Egypt, the 4.8mtpa Damietta LNG plant has returned to use for the first time since 2012, when it shut down due to reduced domestic gas production. It is expected to load its first cargo in the second half of February. Ship-tracking data from LNG Edge shows the 174,000cbm vessel Vivit Americas LNG is heading to Damietta for a 17 February loading. 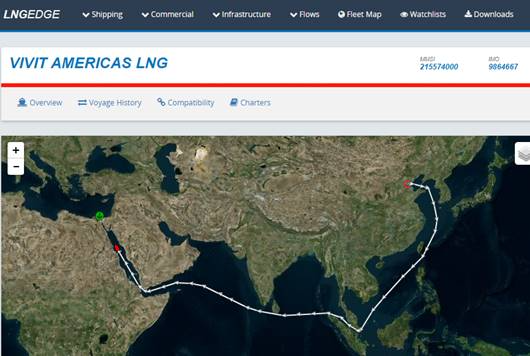 There could be much more supply available this summer than last year, particularly if US producers that cut back output last year due to low prices remain in operation this summer. However, cold weather is likely to leave greater need for storage reinjections this summer, while demand from China and south Asian countries such as India and Pakistan will continue to grow.

East Asia could see a possible return of price spikes in mid-summer if temperatures in Japan are high around July/August driving up electricity demand, as seen in some past years.