Spot LNG prices have broken back into double figures, over $10/MMBtu, as Europe continues to pull in gas to refill its giant storage sites after a cold winter, while east Asia faces possible power demand spikes for summer air-cooling in the months ahead. 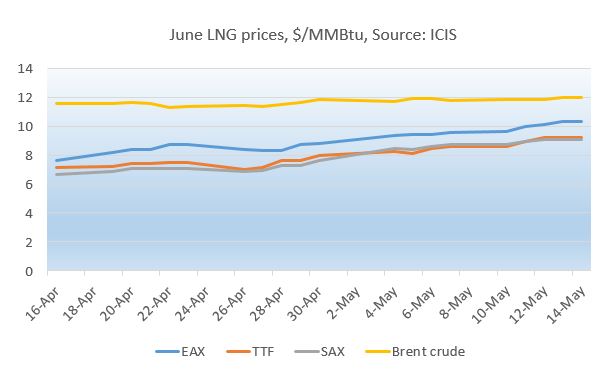 The competition between Europe and Asia, as well as uncertainty over the Russian pipeline flows that offer an alternative supply for Europe’s storage, is resulting in an unexpectedly bullish market and a complete turn-around from last summer’s record low prices. It means US exporters will be much busier this summer than last year, when they reduced output due to the weak market. It could also pave the way for a bullish third and fourth quarter, though it is not impossible the market could be much longer on gas again in spring 2022 if the next winter is mild.

Europe’s onshore gas sites were around 27% full in mid-May, compared with 65% after last year’s mild winter, and 50% two years ago. This isn’t outside historical norms for a cold winter, being similar to the position in 2018. But it means that companies need to inject around 38 billion cubic metres more of pipeline gas (around 27 million tonnes of LNG) to catch up to last year’s position. That’s enough to allow back into the market the 10 million tonnes of US production that was curtailed last summer, and much more. 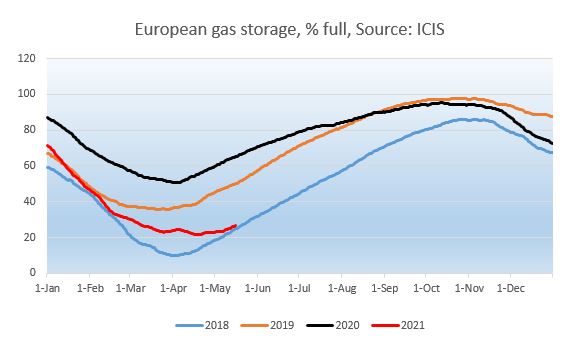 Injections made little progress during a relatively cold April, with the result that there is even more catching up to do over the rest of summer than a month before. The UK state forecaster the Met Office said that April 2021 was the coldest April in the country since 1922 with frosty, chilly conditions despite significant periods of sunshine.

The European gas market remains uncertain over the amount of Russian gas that could reach Europe by pipeline over the summer, with the status of the Baltic Sea Nord Stream 2 pipeline from Russia to Germany remaining a subject of fierce debate, and much speculation over how much gas could flow to western Europe via the alternative route through Ukraine instead.

European buyers are thus likely to be competing against Asia for gas as Asia moves into its second peak demand season of the year around July/August when high temperatures can prompt strong electricity demand for air conditioning. Taiwan has already seen a power cut in mid-May amid temperatures soaring over 40 Celsius. Meanwhile, in April the Japan Meteorological Agency indicated a more than 50% chance of warmer-than-normal weather during April to June. The Tokyo Olympic Games, however, may not be the boost to demand once expected given the absence of foreign visitors.

Record prices for EU carbon allowances, over Eur50/tonne, are also driving a need for increased gas-fired power generation in Europe, adding further bullishness to the market.

The next major additions to global supply are the US Calcasieu Pass and Sabine Pass train 6 projects. Both of these are due to start loading their initial cargoes ahead of schedule around the end of the year. With limited extra supply before then, the market could remain tight in the third and fourth quarters, particularly with Asian buyers keen to stock up early ahead of this winter to avoid repeats of January 2021’s spot price spikes over $30/MMBtu.

However, if traders refill storage by the end of the year and prepare well for next winter, and it turns out mild, it’s possible that the market could be reasonably well-supplied or even long again by spring 2022, particularly if the two US projects make good progress with their commissioning. Calcasieu Pass is due to add an extra 11 million tonns per annum to the market, while Sabine Pass train 6 adds 4.5mtpa. Annual variations in weather remain a key swing factor.

Meanwhile, Norway’s 4.3mtpa Hammerfest plant, the only LNG production in Europe, is now expected to remain out of action until the end of March 2022, an extra six months compared to the previous expectation of an October 2021 restart. The facility closed after a fire in September 2020 for investigations and repairs. 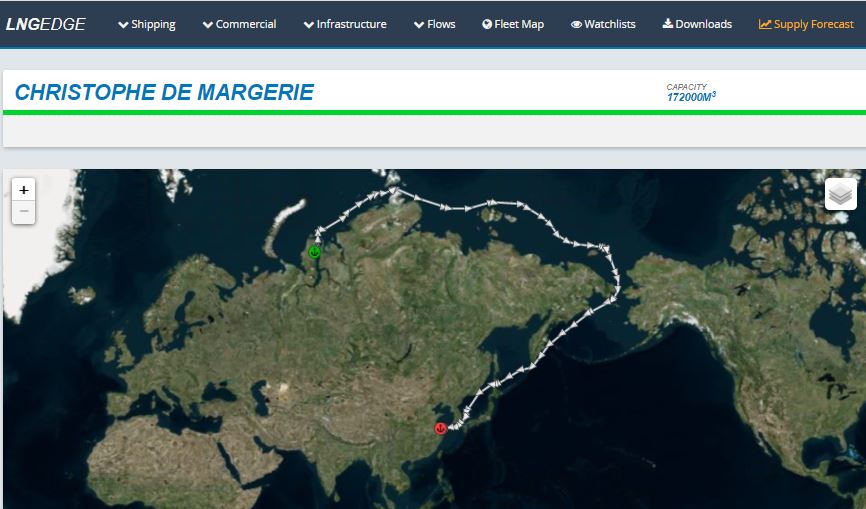 Nearby, Russia’s Arctic Yamal project is looking to restart deliveries eastwards through the Arctic to Asia through the Northern Sea Route. In 2020 the first cargo to take that route in the summer was the Christophe de Margerie departing Yamal on 18 May 2020 and arriving Jiangsu Rudong in China on 25 June 2020. However, after a colder winter the ice along the route may be thicker this year. That may mean the route stays closed a little longer than last year.