Spot LNG prices remain bullish as China’s demand growth continues and Australia enters a period of heavy maintenance, which allowed the US to overtake Australia’s monthly exports for the first time ever.

Meanwhile, Europe’s onshore gas storage facilities remain much emptier than at the same time in the last two years, boosting demand for injections and pushing Europe into competition with Asia. Higher gas prices in Europe are also encouraging competition in power generation from coal, which boosts emissions prices, in turn driving gas higher.

The ICIS East Asia Index (EAX) for July cargoes averaged $10.725/MMBtu during its period as the front-month assessment, from mid-May to mid-June. That was up 19% from the previous month’s average and about five times the $2.189/MMBtu average the year before. In summer 2020 a mild winter reduced storage injection demand, while the covid pandemic dented economic activity. Combined with new production projects this had caused an oversupply and crushed prices. 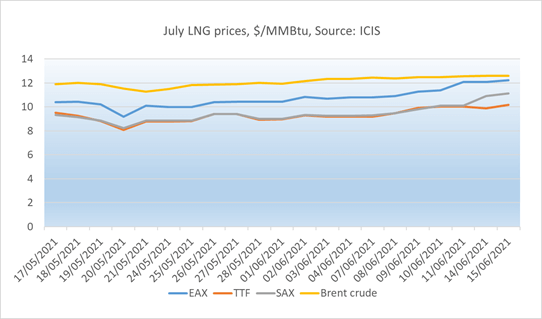 This summer growing demand in Asia competing against Europe’s empty storages looks set to bring bullish prices across the season. There could be some easing of tightness at the turn of the year when new US projects start up at Calcasieu Pass and Sabine Pass train six, particularly if next winter turns out mild. But LNG producers should be looking forward to a much more profitable year in 2021. In addition to spot LNG prices being higher, strength in the oil market will also be of benefit to producers selling on long-term, oil-linked contracts, which are still common in Asia.

China’s LNG demand continues to grow at rapid pace, helping to soak up the new supplies that have entered the market in recent years. For the 12 months from June 2020 to May 2021 China’s LNG imports reached around 76 million tonnes, equalling those of Japan over a 12-month period for the first time ever. China could soon overtake Japan’s demand on a 12 month basis, making China the largest LNG importer in the world. 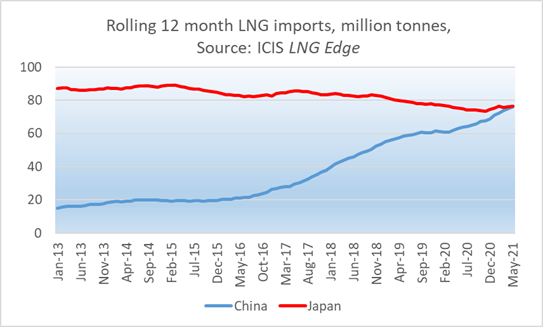 China has already exceeded Japan’s LNG demand in some individual months. It is also a much bigger gas importer overall than Japan. China imports considerable amounts of pipeline gas in addition to LNG, whereas Japan only imports LNG.

Europe will be competing against Asia for cargoes. As of mid-June, Europe’s onshore gas storage facilities hold around 37 billion cubic metres less gas than at the same time last year. That’s equal to some 27 million tonnes of LNG, a much larger amount than the tonnage of LNG production curtailed from the US amid low prices last summer.

The ICIS TTF price, the benchmark for spot gas and LNG in Europe, has been trading at a steady discount to the Asian EAX price, but the markets are moving in line with each other, and Europe will not want to drop far enough below the EAX to allow greater flows of flexible LNG away to Asia.

Australia, a key supplier to east Asia, saw its output dip in May 2021, due to a number of maintenance outages. There was planned work at facilities including Ichthys, Gorgon and GLNG. This dip allowed surging US output to overtake Australia, on a single-month basis, for the first time ever. 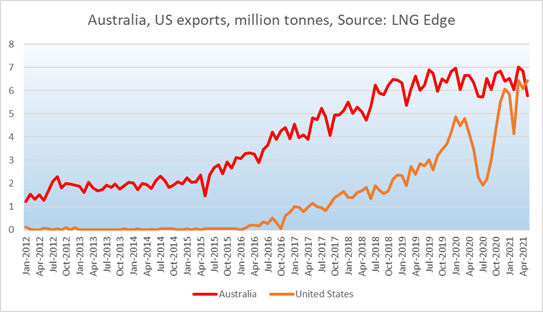 US output in May 2021 was 6.4 million tonnes, compared with 5.8m tonnes for Australia. The US brought new production trains on over the last year at Cameron, Freeport and Corpus Christi. They didn’t get to run at full last summer due to low prices, and suffered disruption from hurricanes late last year, and from the Texas deep-freeze in February 2021. But now they are able to hit higher rates.

Meanwhile, the Northern Sea Route through the Arctic from Russia to east Asia has re-opened for summer 2021. The first ship to head through the route this season is the 172,000cbm Nikolay Urvantsev, expected to make an early July arrival in Japan. 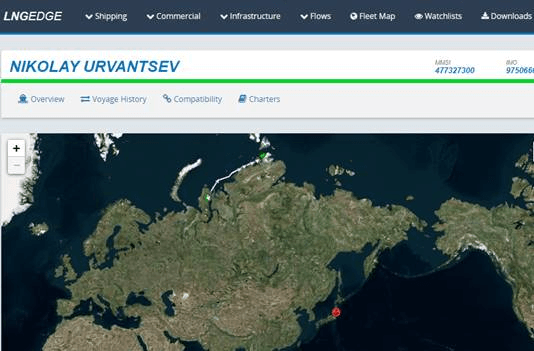 In summer 2020 the first ship to head through the Northern Sea Route had been around a month earlier, on the 172,000cbm Christophe de Margerie on 18 May. But after this year’s colder winter the ice was thicker, taking longer to thin enough for transits to resume.