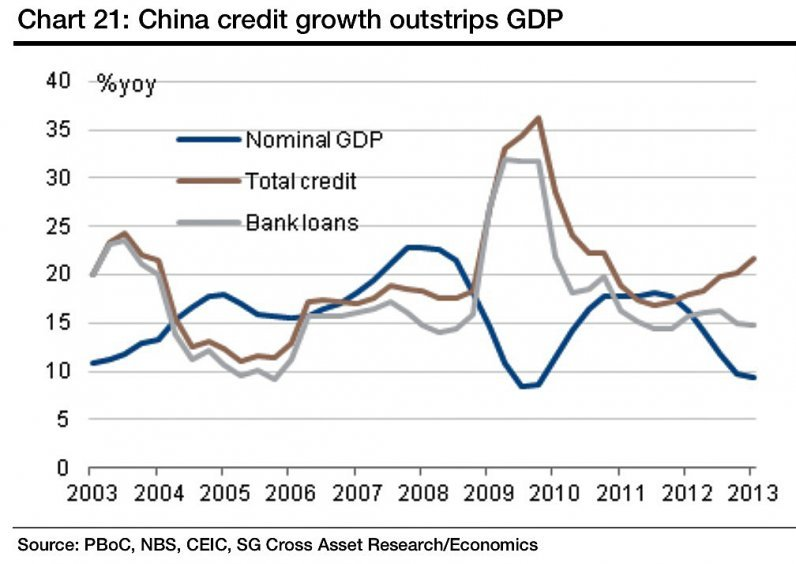 CHINA’S immediate credit scare appeared to ease somewhat yesterday when the People’s Bank of China (PBOC) said that it would supply liquidity to support banks that have a healthy balance sheet and lend to promising projects if they see a temporary liquidity shortage.

But room for interpretation was left open, as the PBOC did not disclose what benchmarks it would use to for assessing whether or not to supply liquidity. This has left plenty of room for more volatility in China’s stock market, in business confidence, and therefore, of course, in chemicals prices.

Backwards and forwards we shall continue to go as some people try to cling on to the belief that the old China will, somehow, re-emerge.

Nobody should now be in any doubt about where we are heading.

For example, the  PBOC will continue to clamp down on the shadow-banking system.

“China’s official Xinhua news agency said that the central bank [the PBOC] had been trying to tame what it deems to be runaway financing by shadow banks—an assortment of leasing companies, pawnbrokers, trust companies and other informal lenders subject to limited oversight,” wrote The Australian in this article.

“Chinese officials and economists inside and outside the country have expressed concern that the rapid growth in lending, powered by shadow lenders, could end in a credit bust that could weaken the country’s already slowing economy and force the government to engage in a costly bailout.”

The same article added that in recent weeks, in an effort to attract more cash, Chinese state-owned banks have accelerated their sales of high-yield investment products, collectively called wealth management products (WMPs), to customers rather than reining-in risky lending [these WMPs are part of the shadow-banking system).

Increasing sales of WMPs have allowed the banks to move risky loans off their balance sheets, thus masking the true extent of potential non-performing loans, The Australian added.

Another problem with WMPs is that they are usually used to finance longer-term projects, including real estate and infrastructure projects, even though the investments themselves are usually short-term, the newspaper added.

Thus, it seems as if last week’s decision to allow short-term borrowing rates to increase to a record high was partly designed to scare the banks into reducing their speculation in WMPs.

China has no choice but to stick to its present course, according to Charlene Chu, senior director at Fitch Ratings in Beijing.”

“Overall credit has jumped from $9 trillion to $23 trillion since the Lehman crisis,” she said in this Daily Telegraph article.

“They have replicated the entire US commercial banking system in five years. This is beyond anything we have ever seen in a large economy. We don’t know how this will play out. The next six months will be crucial,” added Chu.

And, as the chart above reminds us, the investment growth model is a complete bust. Oversupply across so many manufacturing industries, and in real estate and infrastructure, means that each RMB invested in all of the above sectors is delivering ever-diminishing returns.

China’s direction was clear 18 months ago, when we wrote chapter 6 of Boom, Gloom & The New Normal.

We only hope that chemicals companies had formed similar views as us 18 months ago, and, as a result, have already carried out the right kind of scenario planning.