At Least One Company Saw It Coming 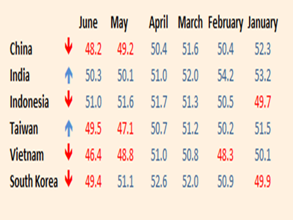 A MAJOR petrochemicals company two years ago predicted that real Chinese GDP growth, as opposed to the “man-made”  official numbers, would fall to 4% in 2013 and 2014, a source with that company told the blog.

This is tremendous to hear as it means that at least one company was well ahead of the very recent, and very belated, shift in the consensus view on China.

But a source with a second petrochemicals producer warned that what was much more common across the industry was the following spin on events:  “This is a minor hiccup as China adjusts itself to the changes in the global economy and the Chinese government will step in when needed to put growth back on track. “

Meanwhile, all the indications are that GDP growth will be well below the government’s target of 7.5% for 2013.

For example, the final China HSBC/Markit Purchasing Managers’ Index (PMI) for June, which was yesterday, retreated to 48.2, the lowest level since September 2012 and down from May’s final reading of 49.2. It was in line with a preliminary reading of 48.3 released on 20 June.

The official government PMI, also released on Monday, fell to 50.1 in June from 50.8 in May.

And, largely because of the knock-on effects of what is happening in China, PMI indexes across Asia have fallen, according to this Beyondbrics blog post.

“In Taiwan, a barometer for global electronics, the index remained below the 50-point level indicating growth. In South Korea, the HSBC Korea PMI recorded its first sub-50 reading in five months as new orders fell,” said the post (see the above chart).

Meanwhile, in a further sign that China’s senior leaders are prepared to accept short-term pain for long-term gain, President Xi Jinping was reported by the official Xinhua news agency of telling government officials that they would no longer be judged solely on achieving high GDP growth numbers.

The Communist Party should instead place more importance on achievements in improving people’s livelihood, social development and environmental quality when evaluating the performance of officials, said Xinhua, quoting a speech that Xi gave in late June.

Everything is still going to plan, which is great for the long-term future of China.