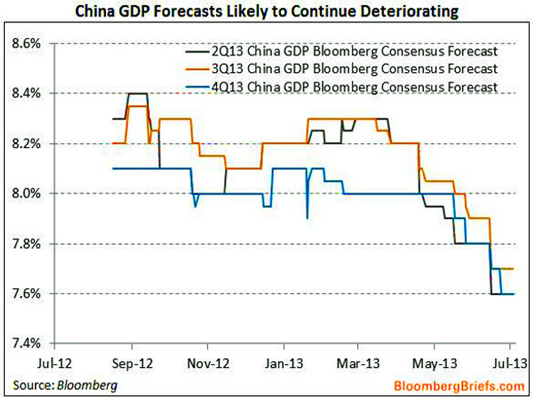 THE conventional way of measuring the health of an economy is, of course, to assume that the stronger the growth in GDP the better the outlook.

But in China, rather than viewing charts such as the one above as bad news, they should be interpreted as a sign that all is good.

GDP growth at 6-7% per year or more over the next decade should, conversely, be viewed as  indicating that China is heading for economic collapse. Growth at such levels would prove that the “vested interests” had won the day through, for example, preventing liberalisation of how deposit rates were set and maintaining the excessive influence of the state-owned enterprises.

Petrochemicals companies must therefore tell a much more complicated story to their investors.

Instead of hyping a short-term boost in sales that would come from another investment-driven surge in GDP growth, they should highlight the long-term risks.

And if economic rebalancing is successful, it might be that increases in median household income will become a more important measure of where petrochemicals consumption is heading than GDP.

At the moment, of course, the standard approach globally is to take GDP growth forecasts and assume a multiple of demand growth for petrochemicals over those numbers.

But in the future, if GDP growth declines in China while median household incomes  surge, this might not be bad news for growth in petrochemicals consumption. The more money that people have in their pockets, the more likely they are to buy all the consumer goods made from petrochemicals, even if GDP growth appears to be telling a different story.

The logic for this view comes from the arguments made by Michael Pettis, a finance professor at Peking University, in this Bloomberg article:

He says:  GDP growth rates over the next few years of 7.5%, or even 7%, will [should] be impossible to achieve. Until now, such gaudy statistics have been produced by ballooning investment.

With so much of that investment now creating less economic value than debt, China has experienced an unsustainable expansion in credit. The country is perilously vulnerable to a chaotic adjustment.

This cannot continue. Growth will drop to well below 7% one way or another because credit growth must slow sharply. Ultimately, though, GDP growth rates are the wrong target. For China to successfully rebalance its economy towards a healthier and more sustainable model, the measure that really matters is how fast median household income is growing.

Why? Consider what it means for China to rebalance. With household consumption at an astonishingly low 35% of GDP, in order to raise that figure to even 50% of GDP within a decade – still by far the lowest proportion of any major economy in the world — consumption growth would have to exceed GDP growth by close to four percentage points every year.

An average annual growth rate of 7.5%, in other words, would require growth in consumption to exceed 11 percent. How could China possibly get citizens to start spending that much faster? In fact, consumption now contributes less to GDP growth in China than it did during the first half of 2012.

It is now widely understood that the reason for China’s very low household consumption share is the very low household income share of GDP, which, at around 50%, is among the lowest ever recorded. To raise that figure while maintaining GDP growth of 7.5%, or even 6%, would require a ferocious surge in Chinese household income, even as China and the world slow down. This will be impossible to achieve without a continued, and very dangerous, surge in debt.

In recent decades, real disposable income has grown at well above 7% a year, which, although much lower than China’s GDP growth rate, is nonetheless a tremendous feat. This is the growth rate that must be maintained. Beijing’s policies should aim for average annual growth in household income of 6 or 7 percent.

This would ensure social stability and would continue to drive China’s economy forward. It implies, however, that if China is to rebalance meaningfully, GDP must grow by “only” 3 to 4%t, which – although low by recent Chinese standards –  is consistent with rapid growth in the income of ordinary Chinese and a real and sustained rebalancing of the Chinese economy, as well as consistent with almost zero investment growth.

PREVIOUS POST China PE Demand Up By 13% On Environmental Concerns, Restocking
NEXT POST Listen To The Iconoclasts