China PE Demand Up By 13% On Environmental Concerns, Restocking 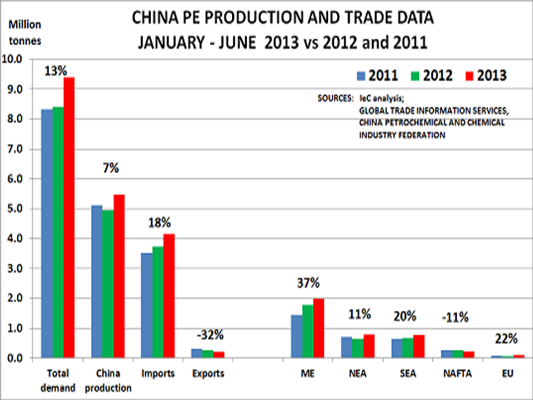 CHINA’S apparent demand for polyethylene (PE) surged by 13% in January-June this year (red column) compared with the same months in 2011 (blue), according to data from Global Trade Information Services.

This represents a further improvement from the 10% increase in PE demand in the January-May period of 2013.

“This is all very baffling, given the weakness in the Chinese economy, particularly the manufacturing sector,” said a chemicals analyst.

But this is, of course, tremendous news as it is in complete contrast to the pessimism that dominated thinking just a few months ago, when some industry players were predicting flat or even declining growth for PE in China in 2013.

Andrew Liveris, CEO of Dow Chemical, told the Wall Street Journal in an interview last week that food safety concerns in China, including those surrounding volumes of dead pigs floating down a river in Shanghai and rat meat being sold as lamb at some food stalls, were resulting in more people buying pre-packaged foods in supermarkets.

This would be in keeping with our view that demand growth in China is becoming ever-more opaque and complex because of a the changes taking place in the country’s economy and society.

We have also suggested that one explanation for the strong growth in PE demand growth up until May might be China’s Operation Green Fence – tougher enforcement of environmental regulations governing imports of waste or scrap PE – which, of course, reflects an evolving Chinese society.

Some producers had suggested that a similar crackdown in 2009 was a major factor behind the tremendous demand growth in PE during that year.

But an industry source offered a different interpretation of the historical impact of recycling on Chinese growth and what could be happening today.

“In 2009 I think the drop in waste imports and increased import of virgin plastics by China was more due to low and affordable prices of polymers,” he said.

“Now, with the global economy doing badly and more and more scrap being recycled in the developed world, there may not be incremental availability of scrap to feed the Chinese appetite.

“The Chinese regulations on environmental issues are there alright but the Chinese know how to circumvent these rules.  Definitely, Green Fence could have helped regulate scrap imports, but it may not be the full story.”

The data for imported PE scrap material up until May, however, doesn’t reveal any significant decline:

A second industry source believed that the recovery in virgin PE demand might be largely the result of inventory building.

He argued that, at least in the case of the “dead pigs scare”, this occurred too late to positively impact PE demand over the last few months.

“Packaging films that went into to the increased volume of packaged products sold as a result of the dead pigs would have been made at least six months earlier, if not more,” he said.

“A sudden spike in supermarket sales will, therefore, not translate into higher resin sales in the same quarter.”

But as fellow blogger Paul Hodges pointed out in his post on Saturday, there were many food scares before the “dead pigs” incident.

“An informed guess might be that Chinese housewives are becoming more aware of contamination risks – e.g. milk powder, water pollution etc,” he told this blog.

“Companies like Unilever and Nestle have certainly talked about this, and about shortages of product developing.  So this could be driving greater use of PE in food packaging.”

And at first glance, the sheer scale of the increase in demand seems to rule out the possibility that this is mainly about inventory building.

But remember the scale of what happened in 2009-2010 and its lingering effect.

Traders could have been tempted to stock-up in Q1 of this year because they misinterpreted the ample availability of credit during that period as a sign that China’s new leaders were in favour of a major economic new stimulus programme.

However, as everyone now knows, Beijing is determined to withdraw, rather than add to, China’s total availability of credit.

This raises the possibility of de-stocking if concerns over a weak peak manufacturing season are realised.

A factor prompting end-users to rush into the market – thus boosting demand in the short term – could be perceptions of tight supply.

Unconfirmed reports of a delay to the start-up of ExxonMobil’s 1m tonnes/year metallocene linear-low density (LLDPE) complex in Singapore was said to be a factor behind strong  sales in June.

And  now PTT Global Chemical’s low-density PE (LDPE) plant in Thailand will be shut down for three months because of an outage, with Petlin  Malaysia’s LDPE facility due to undergo a turnaround, according to ICIS.

The blog has also heard unconfirmed reports of delays to the start-up of new Chinese capacity, production problems in Iran and/or import credit problems for Chinese buyers of Iranian material, and a low operating rate at the new ExxonMobil plant in Singapore – which is now said to be on-stream.