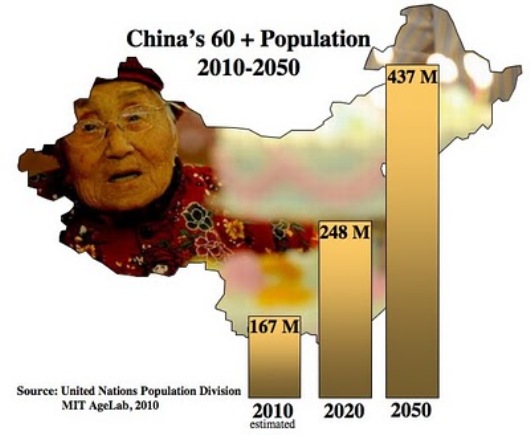 ANOTHER, on the surface, stunning announcement last Friday – along with promises of root and branch economic reforms – was China’s decision to relax its one-child policy. All of these announcements followed the conclusion of last week’s crucial Third Plenum.

From now on, couples will be allowed to have two children if just one of them is an only child. Today’s system stipulates that both parents must be only children for the couple to be exempted. There are also other existing exemptions, including permission for ethnic minorities to have more than one child.

But you cannot turn 55-year-olds into 30-year-olds and so China is stuck with its demographic crisis for at least a generation. For instance:

Minimum wages, therefore, seem likely to continue increasing at around 20% per year because of tight labour markets. This will accelerate the “manufacturing drift” of low-value manufacturing away from China. Chemicals companies need to change their sales strategies in response.

It is worth noting again that China enjoyed a fantastic demographic dividend of a youthful population, leading to a bulge in the working-age population. Between 15-25% of 1980-2010 GDP growth was due to a favourable age structure, again according to the Brookings-Tsinghua Centre.

But what about the longer term benefits of relaxation of the policy? Can this demographic dividend be replicated?

“Some 15 million to 20 million Chinese parents will be allowed to have a second child after the government announced Friday that couples where one partner has no siblings can have two children. But the easing of the policy is so incremental that demographers and policymakers are not anticipating an influx of newborn babies at a time when young Chinese couples are already opting for smaller families, driving the country’s fertility rate down to 1.5 to 1.6 births per woman.

“‘A baby boom can be safely ruled out,’ said Wang Feng, professor of sociology at the University of California Irvine.

“’Wang noted that although Chinese couples where both parents have no siblings have for some time been allowed to have a second child, many have elected to have only one.

The Financial Times added that only 8% of couples in Shanghai, who qualified to have two children under the previous policy, have applied to have two kids.

The problem is that many Chinese have simply got out of the habit of having larger families, says the FT.

Plus, as Chang points out:  “China’s one-child policy has, along with other factors, has contributed to the world’s most skewed sex ratio at birth of 117.7 boys for every 100 girls last year, according to official sources (most societies do not exceed 107 to 100).

“As a result, there are perhaps as many as 25.4 million excess males in the under-15 cohort and maybe 51.5 million overall.”

The shortage of girls is, obviously, another reason for birth rates that are likely to remain well below the population replacement rate of 2.1  babies per mother.

Chemicals companies need to accept that unfavourable demographics will drive demand in China. They need to get on with creating with the products and services that an ageing population will require – in coordination with consumer goods manufacturers.

This will often require companies to go right back to the drawing board, requiring more investment in research and development.

PREVIOUS POST Re-assembling China's Incentive Systems
NEXT POST Australia: Nice Work If You Were Able To Get It