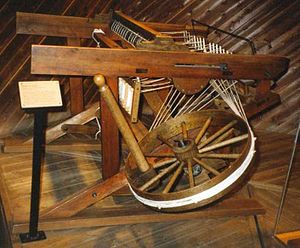 MANUFACTURING via 3D printing could result in an industrial revolution as big as that which occurred in 1766 with the invention of the spinning jenny (see above).

“The pedal-powered machine allowed a single person to spin eight cotton threads at a time rather than just one,” wrote James Grubber in this edition of his Asia Confidential newsletter.

“The spinning jenny, along with the steam engine and better power looms invented later on, transformed manufacturing productivity. Increased mechanisation meant you could do much more with less.”

3D printing might also, according to Chris Anderson in his book, Makers: The New Industrial Revolution, result in another explosion in productivity and a surge in economic growth.

But in the interim, just was the case with the industrial revolution, manufacturing faces huge disruptions.

For instance, Grubber warns that:

1. As everyone had become a blogger today, everyone will become a manufacturer tomorrow. Supply will pour into the space. Every amateur handyman and inventor has the tools to run wild now.

3. It will result in an abundance of niche products. Consumers will benefit from this choice, even if there’ll be too much of it!

4. Prices of mid-to-low end manufacturing goods could well come down. They did for newspapers, so why not physical goods?

In a series of later blog posts we will look at what this means for China’s outsourcing growth model, and how 3D printing might also affect other developing economies.

And we will look at how petrochemical producers – those that can be bothered to think beyond the next set of quarterly results – should respond.