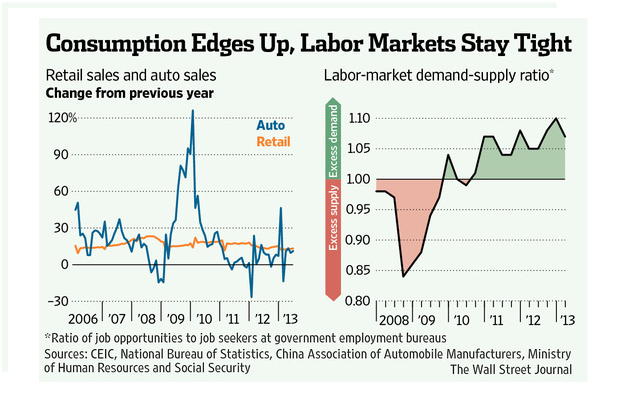 One of the reasons for the surge in investment is the failure to pop the property-market bubble.

“In the real estate sector, it wasn’t so long ago that China’s leaders were promising a crackdown on bubbly prices,” adds the WSJ.

“Now nationwide sales by floor space are up 30.4% year-on-year and prices in Guangzhou are clocking 15.3% increases with other major cities not far behind.

“That takes home ownership further out of reach for first-time buyers. But it’s also driven a return to growth in real estate construction – which edged up to 2.9% in the first half, a turnaround from contraction in 2012.”

Another reason is that local investment has increased, thanks to the building of more luxury villas for corrupt politicians and unneeded bridges, airports, roads and other infrastructure.

A third factor behind the failure to rebalance is disappointing growth in retail sales, partly thanks to the crackdown on more conspicuous displays of corruption, such as fine dining, writes the WSJ.

A slowdown in urban income growth, to 6.5% in the first half from 9.6% last year, also seems likely to be a factor in the poor retail sales figures. The Financial Times says the weak income growth is the result of slightly softer demand for white-collar workers, underlining the point we made last week.

There is only one valid interpretation that can be made from this data: China has no choice but to press the foot much harder on the restructuring peddle in order to replace is failed economic growth model and to create a more decent, equitable society for its increasingly annoyed citizens.

It has political breathing space to do so because, to date, despite the weaker income growth amongst the urban middle class, overall employment markets remain tight.

“In the second quarter there were 6.1m jobs available to 5.7m job seekers – 1.07 posts for every person seeking work, down just a touch from the first quarter,” writes The Financial Times.

This is the complete reversal  of 2008, when the global financial crisis resulted in some 20m job losses in China.