Running Away From Complexity 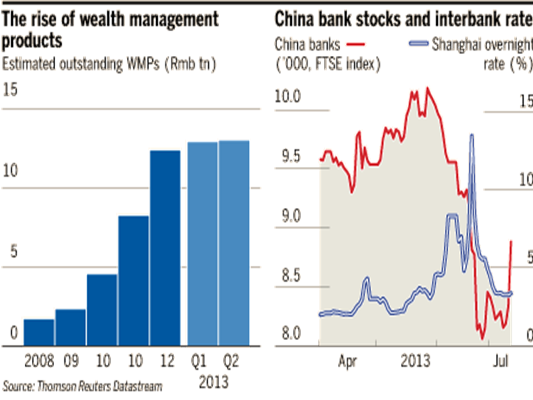 TWO-and-half years ago, the blog was told of a struggling Shanghai shoe-repair shop owner who had mortgaged himself up to the hilt in order to buy three apartments.

“He has taken the risk because he assumes that the government will never let property prices fall,” a sales and marketing manager from a major polyolefins producer explained to the blog.

Similarly, in this very disturbing report on China’s shadow-banking system, a banking analyst told the Financial Times: “Investors don’t care about the underlying project [projects that provide collateral for highly-speculative wealth management products, which are part of the shadow-banking system].

“They think everything is backed by the government. One salesman told me that as long as the Communist party remains in power, these products are safe.”

But China’s new leaders are perfectly prepared to allow a property-market crash because the political risk is greater of allowing current levels of wealth inequality to be maintained. They also want to get rid of the speculators who have badly distorted China’s economy.

And as the late June credit crackdown illustrated, they are equally prepared to bring the rapid growth in wealth management products to a halt, even if it means allowing second-tier banks to go under.

But in the process of winding back the shadow-banking system many of China’s small and medium-sized enterprises (SMEs) will go bust, as they depend on the system for their credit.

So be it. You can’t make an omelette without breaking eggs and, ideally, the SMEs that go bust will be those that do not add enough value to China’s economy as it tries to move up the Lewis Curve – for example, low-value plastic converters.

What the blog continues to find hugely disappointing is that all of these problems were clearly evident several years ago, but few people at that time wanted to listen. And too many people still don’t want to listen.

The reason is that most companies and analysts continue to run away from rather than embrace complexity.

They run away from complexity because it is too politically difficult to sell within their companies, and too difficult to explain to investors who need a nice simple story in order to be persuaded to part with their money.