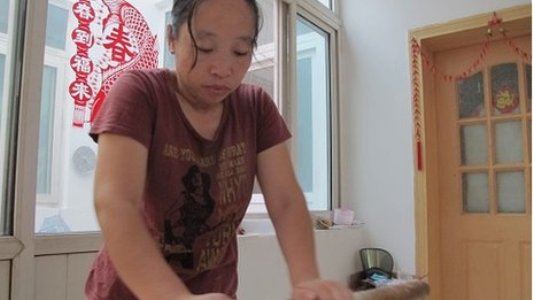 Source of picture: The BBC

“For Hongxia, 39, life is pretty tough (see the above picture),” writes Martin Patience of the BBC in this excellent story in China’s health crisis.

“Her husband, Zhang Yansheng, 41, is in the room next door watching TV. He is suffering from a brain tumour and cannot walk or talk.

“Like more than 95% of the population he has some form of government health insurance. But the schemes do not cover all the costs.

“His wife works as a bus conductor. But she spends her entire salary, around $600, on paying for her husband’s medication.

“The family only survives with hand-outs from relatives.”

Government spending on healthcare was estimated at $385bn in 2011.

This number is expected to more than double by the end of the decade, according to a McKinsey report.

And so the government has launched an investigation into price-fixing by drugs companies as it tries to rein-in these soaring costs.

But the bigger issue is how China will fund the healthcare costs that will result from its rapidly-ageing population.

How can China successfully rebalance its economy away from investment and towards greater consumer spending unless it tackles its healthcare crisis?

Has your chemicals company carried out detailed scenario planning around healthcare reform in China, or does it just assume that success is inevitable?