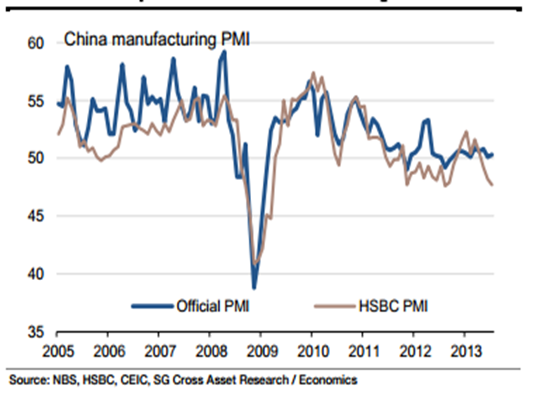 CONFUSED? You shouldn’t be. Yesterday’s announcement of two Chinese purchasing managers’ indices for July, which had moved in opposite directions, merely underlines the imbalances in China’s economy.

The final HSBC/Markit PMI for July came in at 47.7 – an 11-month-low and the same as the flash forecast released a couple of weeks ago – is the most important measure for the chemicals industry, as its survey sample comprises mainly small and medium-sized enterprises (SMEs). It is the SMEs that make up the bulk of China’s chemicals and polymers buyers.

In contrast the official PMI, which measures predominantly big companies, rose to 50.3 in July from 50.1 in June.  The continued over-dominant role of the state-owned enterprises (SOEs) in economic growth can hardly be cause for cheer as China tries to rebalance its economy.

(For both indices anything above 50 represents expansion, whereas anything below 50 is a contraction.)

And you can call is cynical and/or sceptical, sure, but should one always trust Chinese government data?

“A couple of years ago, the official ones seemed to be favoured as a better measure because it was a bigger sample and supposedly a broader one too (Markit Economics rejects that criticism),” wrote the FT Alphaville blog in this post.

“Then some ambivalence set in as the two diverged and the HSBC/Markit survey looked better. Early this year the sample for the official PMI sample had been greatly increased (from about 820 to 3,000), but the government agencies who compile it (the China Federation of Logistics & Purchasing and the National Bureau of Statistics) didn’t provide much more detail on this change, as far as we can tell.

“Then for June, the industry sub-sections in the official PMIs were ‘suspended’ because ‘time is limited — there are many industries, you know’. Yes, that’s exactly what CFLP vice-president Cai Jin reportedly actually said.”

A further cause for concern is that, as FT Alphaville also points out in the same post, the weaker HSBC/Markit PMI might be partly because the June credit squeeze is likely to have hurt the less well-connected SMEs more than the big companies.  This underlines the challenge that Beijing faces in directing money to the right parts of the economy as it pushes ahead with reform.

By John Richardson THE debate about how exactly how much coal-to-olefins ...

By John Richardson THE blog was amazed over the weekend when it discovered that ...