THE November Plenum is over and now the analysis has begun.

Some commentators view the formal communiqué about the plenum – which was released by the government on Tuesday – with tremendous enthusiasm.

Others, however, are disappointed, while a third group of commentators are sitting on the fence.

But the meeting merely reflects the ambiguity and complexity that now characterises China’s economic direction. Gone is the old guarantee of strong GDP growth, driven by favourable demographics and investment in infrastructure and industrial capacity. Get used to it.

Deng Xiaoping, China’s president at that time, only set out the broad outline of economic reforms during the earlier Third Plenum. Implementation often took place at local, as well as national, levels over a period of several years – and involved lots of trial and error.

The end-result, though, was the opening-up of China’s economy, industrialisation on a globally unprecedented scale and mass migration of workers from the countryside to China’s towns and cities. All of the above led to many years of double digit chemicals demand-growth.

It also worth noting that after yet another Third Plenum, which  took place in 1993, the statement issued afterwards rather blandly talked about the concept of a “socialist market economy”. Within the next decade, though, as the Financial Times points out, China established stock markets in Shanghai and Shenzhen, joined the World Trade Organisation and overhauled its banking sector.

Nevertheless, for what it’s worth, this FT Alphaville blog post gives a good summary of the positive, negative and fairly neutral views of analysts on the communiqué released at the end of the latest Third Plenum. A more detailed government statement is expected over the next few days.

“The Third Plenum has met our expectations. In particular, it upgraded the role of the market in resource allocation to ‘decisive’ from  ‘basic’ previously, and reiterated the ‘push for domestic reforms though further opening-up’,” Jiang Chang, a Hong Kong-based economist with Barclays, was quoted as saying in the blog post.

“Based on the communiqué, we judge that there will be meaningful progress in deregulation, fiscal reform (our gauge of the new leaders’ ability to push for reforms), legal and judiciary reform, service sector liberalisation and a push to the Shanghai pilot  free trade zone,” she added.

However, Chang added that “while the lack of mention of family planning policy or Hukou reform may have disappointed some, it has been our long-held view that meaningful, or revolutionary, progress in these two areas is simply unlikely given various social, economic, and fiscal constraints.”

China’s one-child policy was introduced by Beijing in 1979 in order to alleviate pressure on the economy, society and the environment from excessive population growth.

But now China is in danger of becoming old before it is rich enough to afford the cost of caring for an ageing population (see the chart below. 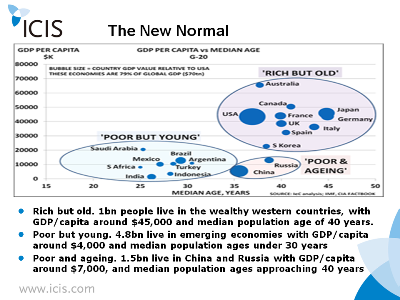 It has also lost the “demographic dividend” of abundant labour supply.

Wage costs are escalating by as much of 20% per year in China because the one-child policy has led to a more limited supply of workers.

Between 15-25% of China’s 1980-2010 GDP growth was due to favourable age structure, according to the Brookings-Tsinghua Centre for Public Policy.

The Hukou system is a registration document that migrant workers carry with them from the countryside to China’s towns and cities.

Even though China became a country with an urban majority in 2011, around 240m people who have permanently moved from the countryside to the cities still have a rural Hukou – a small red passbook that indicates that they are still, in effect, rural residents.

As a result, they do not have access to the same education and healthcare benefits as those who are registered as urban residents, often cannot buy homes and are even unable to obtain driving licenses.

Rural migrants are therefore forced to save a lot of money in order to pay for all of these essentials themselves, depressing China’s domestic consumption. This makes it harder for China to rebalance its economy away from investment and towards private spending.

But the cost of getting rid of the Hukou system might well be prohibitive, as local governments don’t have sufficient revenues to pay for all the additional social services.

This week’s Third Plenum also closed without any clarity over another reform said to be vital for economic rebalancing – a change in land rights.

At present, rural residents do not own full title to the land that they farm. As a result, they cannot trade their land and so use the money this would generate to, for example, set up businesses and buy property.

But lack of land rights is a cornerstone of China’s investment-led growth model.

They have then made good profits from selling the land to industrial and real-estate developers, but still at prices way below what many observers say would have been fair market costs.

Cheap land, along with low labour and energy costs, gave manufacturers a huge edge in export markets – enabling them to create lots more jobs when job-creation in basic manufacturing was more of a priority (i.e. when China had surplus labour).

Plus, the sale of land by the local authorities remains a vital form of revenue-raising.

Hold on, though. Just because the Third Plenum didn’t make specific pledges on land rights reform might not necessarily mean policy changes in these areas are unlikely.

“The concept of equal land rights has been raised,” Ma Guangyuan, a Beijing-based economist told the FT. This, he believes, means that reforms will happen.

He was referring to this statement from the communiqué: “Farmers should participate equally and enjoy the fruits of modernisation.

But the SOEs, from the evidence again of the language in the communiqué, look as though they might continue to enjoy excessive privileges.

“SOE reform seems to have not been considered a priority by the Plenum,” added Wang Tao, the Hong Kong-based head of China Economics Research, in the same FT Alphaville blog post.

“The communiqué used the same wording as 10 years earlier, making it clear that public ownership and the state-owned sector is the pillar and ‘foundation’ of the ‘socialist market economy’. This is disappointing.”

But she did say that the government statement also talked about how private companies were “also the base” of the economy. This suggested that discrimination against the private companies could be reduced in the future, she added.

Oh dear, ambiguity everywhere. So much for a straightforward excel spreadsheet…

The SOEs play too big a role in China’s economy at the expense of private business, warn numerous commentators.

“Their return on capital employed was always very bad. It has become even worse since the big fiscal stimulus package that was launched after the 2008 global financial crisis,” a financial industry source told the blog.

“Even more government money was thrown at the SOEs post-2008, via the state-owned banks. This was spent on yet more projects in already oversupplied industries.”

The SOEs are viewed as not only inefficient, but they are also seen as lacking the innovation that China needs to escape the “middle income trap”.

“Looking back at China’s reform history, it was the decisive action that followed the Third Plenums that made those meetings the turning points of the Chinese economy,” said Wei Yao, China Economist with Societe Generale.

“We think that the Plenum that has just concluded has the potential to mark a new beginning of positive changes. Now having said what needs to be said, the new leaders should do what needs to be done. The real test has just started.”

And perhaps, also, China’s top leaders are giving themselves a great deal more muscle to get the reform job done.

“In one of the few signs of change away from the economy, the document called for ensuring the independence of the judiciary and prosecutors—a catchphrase that state media has said means minimising interference by low level officials while still allowing senior party leaders purview,” wrote the WSJ.

“The communiqué called for the creation of a reform policy committee comprised of Chinese leaders to ensure that the goals they set are implemented.”

In other words, local officials may no longer have the power to, for instance, use the courts to press ahead with an environmentally-damaging industrial development for the sake tax revenues – against the wishes of the central government.

What the reform policy committee will actually do isn’t clear.

But a Shanghai-based polyolefins trader told the blog: “I think what Xi [Xi Jinping – China’s president] is trying to do is give himself, and his other senior leaders, more power through creating this committee, which could be above all the other legislative bodies.

“This might make top down rule easier. He is determined to press ahead with reforms.”

Maybe, though, this political “muscling up” reflects that, unlike in 1978 and 1993, China doesn’t have that much time.

It certainly feels as if time is in shorter supply because political, economic and environmental pressures seem to be building almost by the day.

Every further significant delay for China might thus increase the risk that the whole reform process will fail.