China’s Demographics: What Is Your Contingency Plan? 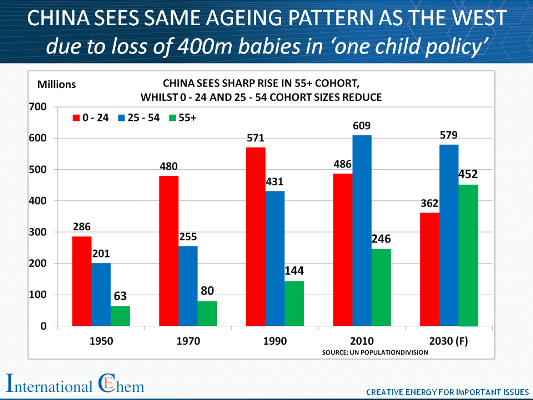 DEMOGRAPHICS shape demand – everywhere, including in China, as we have been discussing since 2011.

Here are a few facts about China’s demographics challenge – from this outstanding Financial Times article by David Pilling – which chemicals company executives need to print out and pin up on their boardroom walls as China heads into its crucial November plenum:

And David adds that China is reaching the end of a 35 year golden period. During this period it was able to easily summon-up strong GDP growth by merely shifting workers from low productivity farm jobs to high productivity factory ones. Between 15-25% of China’s 1980-2010 GDP growth was due to favourable age structure, according to the Brookings-Tsinghua Centre for Public Policy.

China was always going to have to confront the problem of the end of surplus rural labour. This is the “middle income trap” identified by economist Sir Arthur Lewis. China’s one-child policy has hastened and exacerbated this challenge.

The number of Chinese over 65 will triple to 300 million by 2030, whilst today only 1.5% of the elderly are in institutional care, says David.

Low birth rates will make it much harder for single-child families to cope with caring for their parents and grandparents. Thus, there will be the need to fund residential elderly care for tens of millions of people from a social security system, which, at present, is threadbare, continues the FT columnist.

Then there is the gender imbalance. “Because male children are preferred, there are now approximately six boys born for every five girls. In the next two decades that will mean tens of millions of men will have no chance of finding a wife. Mostly poorer and with fewer prospects, they could well become a source of social discontent and crime,” he writes.

On innovation, David is with us when he warns that the jury is still out over whether China can successfully move up the value chain whilst remaining a one-party state.

And more broadly, as we head into this weekend’s plenum – probably China’s most important economic and political meeting since 1978 – can any of the broad range of essential economic reforms happen under the current political system? The New York Times discusses this crucial question here – neatly summarising many of the issues we have been raising over the past two years.

Assuming only one scenario – i.e. a positive one – is incredibly risk for chemicals companies. What is your contingency plan?