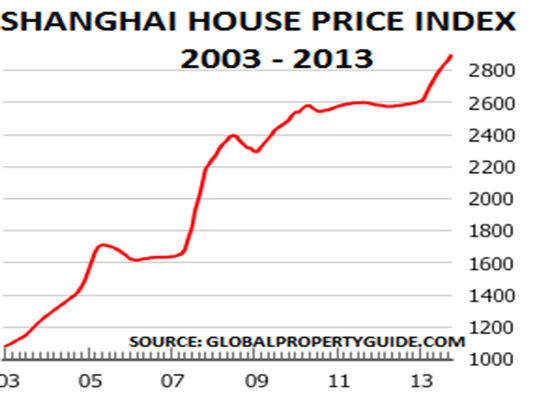 CHINA’s real estate sector was responsible for 16% of the country’s GDP growth, 33% of fixed asset investment, 20% of outstanding loans, 26% of new loans, and contributed 39% to government revenues in 2013, according to Nomura.

And so the potential downside to chemicals demand from a correction in the property sector is significant.

For years, people wrongly predicted the bursting of China’s real-estate bubble. The reason why they were wrong  was that, because of the kind of statistics detailed above, the Chinese government stepped in to rescue the property sector whenever it was at risk.

Why might this time be different? Because of the new government’s firm commitment to widespread economic reforms designed to rid the economy of unsustainable growth, including in the property sector (see the above chart).

Hundreds of millions of Chinese have been priced-out of owning their own homes.

And the real-estate boom has hugely widened the gap between the “haves and the “have nots”. For instance, Sydney University’s Dr John Lee estimates that 30% of China’s private housing wealth is owned by just 1% of people. The “wealth effect”  has thus been mainly enjoyed by a tiny minority.

Further, as we shall discuss in detail on Monday, the imbalances in the property sector have to be dealt with as they are an intrinsic part of the country’s economically, socially and environmentally toxic growth model, including trade finance practices that have greatly distorted chemicals demand. In other words, unless you unravel all the imbalances in the property sector, you might as well not bother with economic reform at all.

Meanwhile, here is some worrying analysis and data: