China Copper, Chemicals And The Interconnections 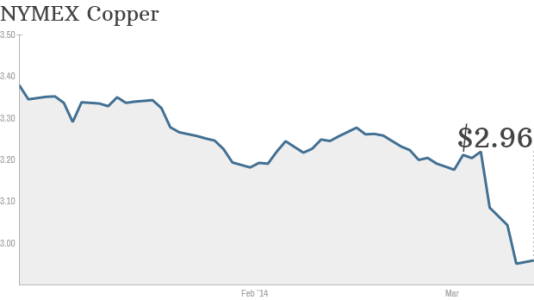 And so a crucial question, therefore, that we need to try and answer is,: Where are copper prices heading?

Last Friday, copper prices rose to a two-week high on the NYMEX because Li Keqiang, the Chinese Premier, was quoted as saying that economic growth should be maintained at a “reasonable pace”.

This was taken as a signal that the government is ready to launch another economic stimulus programme.

But whilst the “economic stimulus” scenario is a great way for commodity and equities traders to make a quick bit of money, it doesn’t stand up to serious scrutiny.

First of all, any stimulus that is launched could be relatively modest compared with that of 2008-2009 – and, quite likely, also, with that of July 2013.

Any new money also seems likely to be part of ongoing economic reforms – i.e. it will be directed at priority areas such as environmental protection and new and innovative small business ventures that take China up the manufacturing value chain.

By their very nature, some of these projects might fail, whilst the successful ones will take a while to deliver significant benefits to growth.

Thus, whilst any announcements of economic stimulus could well lead to rally in copper and other commodity markets, including chemicals, when the dust has settled, people will begin to realise that this time is different.

Hence, copper, which has been buoyed in recent years by all the spending on big, wasteful industrial and infrastructure projects, may in the longer term continue to head south.

“Despite Friday’s gains, copper prices are down 11% so far this year amid worries that China’s slowdown will further curb growth of the country’s demand,” wrote the Wall Street Journal in this article on last week’s rally in copper prices.

“Chinese demand for copper is expected to rise 5% this year from the previous one, down from a 10% rise in 2013.

But the problem with investment bubbles is that in order to keep them stable, you have to pump ever-more air into them. Reducing the supply of air has serious negative short and medium-term consequences. This is what is happening now in China .