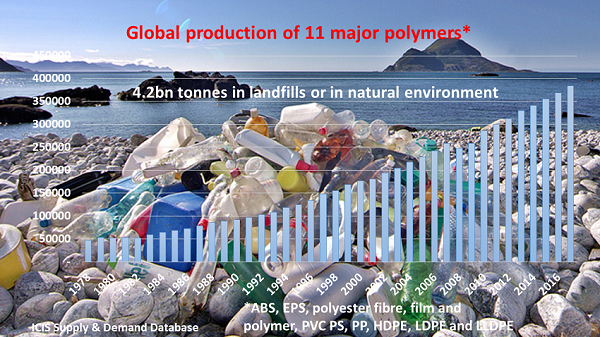 THE global scale of the plastics waste challenge is illustrated by the above chart from my blog post last October. Using our ICIS Supply & Demand Database, examining the production of of 11 major polymers, some 4bn tonnes of plastic has ended up in the natural environment since 1978. Estimates like this are gaining more and more publicity as the global public backlash against plastic waste grows.

And as I shall detail in later posts, the legislative push against the polymers industry threatens to reduce global virgin resin sales by hundreds of millions of tonnes- and so, of course, billions of dollars. This is no exaggeration, based some preliminary work I have done on polymers demand in the EU and what could be the impact of the European Commission’s new Plastics Strategy, which was announced last week.

Details of the Plastics Strategy

The Plastics Strategy – the first-ever for plastics across the bloc – sets a target that all EU plastic packaging must be recyclable by 2030. There is also talk of a tax on plastics that would give this target real economic muscle.

Restrictions on the use micro-plastics under 5mm will also be introduced under the new Plastics Strategy. These are the tiny pieces of PE that are added to health and beauty products such as some cleansers and toothpastes. Micro-plastics cause major damage to aquatic life.

And in a classic carrot and stick approach, the EU will provide €100m of extra funding available to help make recycling a more profitable business. A more standardised system for the collection and sorting of waste will also be introduced, which is aimed at saving around €100 per tonne collected.

The Plastics Strategy comes after a wave of measures to restrict, or ban, the use of single-use plastics across the EU. In Ireland, for example, since the introduction of a levy in 2002, the consumption of single-use plastic bags has fallen from 328 per person per year to just 18 – a reduction of nearly 95%.

And as my colleague Nigel Davis writes in this ICIS Insight article, the next wave of plastics demand destruction could be driven by retailers:

The UK headquartered Iceland on Tuesday said it would turn to paper-based packaging and sharply away from plastics for its own-brand ranges of frozen and non-frozen food.

This could well be the start of a radical turnaround from food retailers which have come to rely heavily on plastic trays, film and wrapping for many of – if not close to all – their products.

Iceland – Britain’s biggest frozen food retailer with 800 stores in the UK and a big export business – has promised to get rid of all plastic packaging of its own-label products by 2023.

Denial would be a commercial disaster

My October 2017 blog post warned that more legislation, like this week’s EU Plastics Strategy, was inevitable. And I wrote:

Many people in the petrochemicals and polymers industries will very rightly add that plastics have quite literally saved millions of lives. Think of drip irrigation systems made from plastic pipes that have improved crop yields. Plastic films and refrigeration help keep food fresh for a long time. Can you also imagine a modern hospital functioning properly without polymers? Of course not. The lists goes on and on.

But this is exactly the same as the debate over whether or not human activity is responsible for climate change.

I am afraid, though, that this entirely misses the point. Perhaps one day in the distant future the climate-change sceptics will be proved right. But being right will feel like a hollow victory if the petrochemicals company you used to work for is out of business because it failed to respond to legislative pressure resulting from today’s firm consensus that climate change is man-made.

The good news is that polymer producers and plastics converters have started to respond in the right way to the reality of today’s global legislative and public pressure against plastic waste, which, surely, has to represent a major environmental challenge. I calculated in my October 2017 post – again using the ICIS Supply & Demand Database – that 4bn tonnes of global plastic waste has been generated since 1978 from the production of 11 major polymers.

Initiatives include Solvay’s three-year commitment to work with the Ellen MacArthur Foundation on ways to speed-up the transition towards a Circular Economy. There is also the PS Loop project in Europe. This is a broad polymer industry research programme to find economic ways of recycling expandable polystyrene. There are many more industry responses that I don’t have space to list.

But the key question is: Will industry initiatives be enough to compensate for the potential loss of hundreds of millions of polymer sales per year?