Last week saw the release of an EU Plastics Strategy which aims to make packaging plastics 100% recyclable in the EU by 2030. China is also moving in the same direction, as I discuss below – and this doesn’t just apply to its well-publicised ban on imported scrap plastic. Domestically-produced plastic waste is also being targeted. As legislative, consumer and retail pressure builds against the global single-use plastics industry, billions of dollars of polymer sales will be lost. 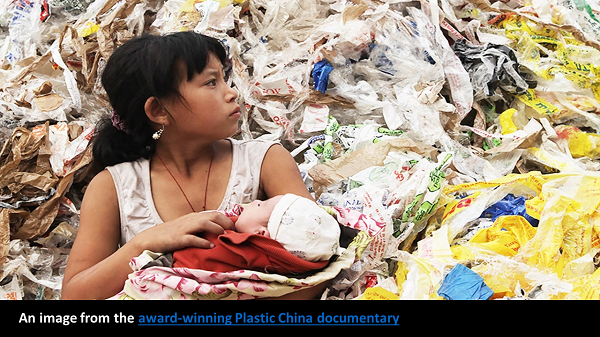 TODDLERS were filmed sucking on liquid contained in syringes and blowing up plastic gloves that were in a giant plastic rubbish dump in a coastal town in the Chinese province of Shandong.

The shots were part of an award-winning documentary that took director Wang Juiliang six years to make which focused on the environment and health effects of imported plastic waste.

He told an interviewer: In addition to injuries from sorting products laced with corrosive or toxic chemicals, poisonous smoke has led to chronic harm. The town has a high rate of cancer and cardiovascular diseases. During my first year doing research, a village woman told me that I should not ask which family had patients, I should ask are there any families without a patient.

Since the 2016 release of the documentary, Plastic China, Wang has launched another project to assess the nationwide impact of plastic waste. In his journey across the country he has come across many other towns similar to the one in Shandong.

After Plastic China was first released, it was quickly taken off the Chinese internet. But interestingly, the film resurfaced in independent cinemas and private screenings immediately ahead of China’s 1 January 2018 ban on imports of scrap plastic, unsorted paper waste and crude textile waste.

Legislative pressure to improve recycling of domestically-created plastic waste is also building as this article on Xinhua – the state-run wire service – indicates.

Different grades of plastic and other rubbish are very often put into the same disposal bins in China, and so cannot be economically separated.

Rubbish is a result usually incinerated which creates an immediate human health issue because of air pollution. The CO2s omitted also make it harder for China to hit its commitments to the COP21 climate deal.

Fines are being levied against businesses and individuals who breach the new rubbish-disposal rules in the 46 cities.

And as with the campaign against air pollution, the approach is carrot as well as stick: By October of last year, four million households in Shanghai had registered for credits to buy groceries. These will be awarded depending on whether or not households follow the new guidelines for dumping their rubbish.

You might believe that China is decades away from developing the kind of recycling economy that already exists in Europe.

But what if you are wrong? Did you predict China’s ban on plastic waste that has caused such huge disruption in the global recycling business?

If your answer is “no”, you might also be wrong on the speed with which China improves the collection, sorting and recycling of its own plastic rubbish.

True, right now, the domestic recycling sector is largely informal – employing many migrant workers in the big cities, who, in Beijing alone, collect 90% of bottles.

But here is another question: Did you predict the extraordinary speed and severity of China’s 2017 air pollution campaign? This indicates a great determination to solve China’s overall environmental challenges.

Here is something else to consider: Creating a modern, highly sophisticated recycling sector would help China escape its middle-income trap.

Obviously, the more efficient the recycling system in the China the more the destruction in demand growth for virgin polymers resins.

Further legislation to reduce the amount of virgin polymers used in packaging also seems likely. China has a good track record here as a 2008 ban on free consumer plastic bags has led to a 66% fall in thin-wall waste from plastic bags.

What is also worth considering as, as I said, is the extraordinary pace and severity of the crackdown on air pollution.In the very recent past, a campaign like this would have lost momentum.

But over the last year, Beijing has significantly increased its central control of the nation’s politics and economy. This suggests that a major campaign to upgrade the local recycling industry and cut back on the use of single-use plastics would see similar success.

The environmental campaign is also hugely popular because of a.) The rising health costs of pollution and b.) The increasing focus on quality rather than just quantity of life as incomes levels rise in China.

Polymer industry executives often talk about the rise of China’s middle classes and how this means booming demand for plastics. True, to some event. But the Chinese middle class story also implies growing awareness about plastic pollution.

Challenging the consensus on polymers growth

Consensus opinion is that mobile internet sales make China different from the rest of the world.

As economies have matured in the rest of the world, multiples of polymer consumption over GDP have slowed down very sharply.  We are told that this will not be the case in China because of the huge growth in online purchases – all of which have to of course be packaged.

Let’s take the takeaway food industry as one example of the extraordinary rise in mobile internet sales. Between January-July last year, 295 million people ordered cooked food over the internet, up from 114 million during the same months in 2015. Further strong growth is expected this year.

But as the China Daily newspaper highlights, this kind of growth cannot be sustained without more environmentally-friendly packaging and better recycling.

The article quotes the efforts of non-government organisation to take restaurants to court. But it argues that the better approach is to let government departments tackle the issue.

The China Daily is also government owned, which further confirms official support for better recycling and reduced use of virgin polymers in packaging.

This could mean that consensus opinion is overestimating China’s polymers consumption growth.

It indicates that consumption will grow from around 23.5 tonnes this year to 40m tonnes in 2030. This would involve annual average growth of 4.5% per annum, representing an average multiple per year of 0.85 times GDP.

To build alternative scenarios, based on the discussion above, you would have to start by understanding how much of overall PE consumption will go into packaging applications over the next 12 years.

The next step would be to calculate realistic scenarios for lower multiples over GDP and break this down by the province. It seems likely that the push against single-use plastic will be stronger than the rich coastal provinces of China.

PREVIOUS POST Plastic Waste: The Billion Dollar Threat To The Global Polymers Business
NEXT POST Asian Naphtha Cracker Spreads To Fall By 50% In 2018