US and China: Intellectual property rights and maybe some historical amnesia 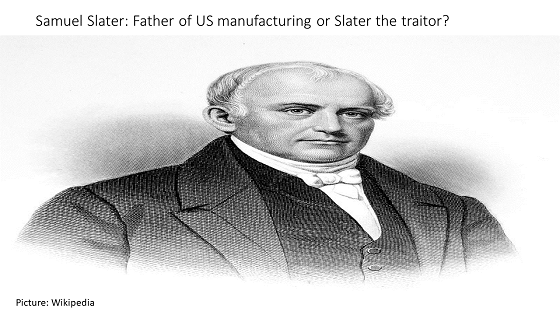 THE SMARTPHONE is a wonderful invention as it allows easy mobile access to the internet for many small businesses. Accounts can be updated and invoices sent on the go when builders, plumbers and bricklayers are between jobs, say my friends who are in these trades in Perth, Western Australia.

Imagine a farmer in the developing world who arrives at his seed supplier only to find he is out of credit with his supplier. It took him a day’s travel on very bad roads to get to the seed warehouse. Within a few minutes he connects via his smartphone and gets more working capital.

There are many other ways that the smartphone goes beyond just a handy device to post pictures and comments  of dubious purpose on Facebook. It has become an important tool for enabling economic growth.

The end-result could have been no emergence of the cheaper versions of the smartphone in the developing world and in the rich world for people without the means to afford say an Apple or a Samsung.

This raises the question of what is good and bad patent protection. Is it possible that as the US pursues China over allegations of intellectual property right theft, barriers are erected around China and other developing countries that have net negative economic and societal effects?

This doesn’t mean to say that I think companies and individuals don’t have legitimate complaints about intellectual property right theft and have suffered greatly as a result of China in particular breaching the rules.

But in this febrile and very hostile environment where we seem to be descending into both a trade and Cold War between China and the US, will we get the balance right? By choking off the transfer of technology and ideas from the West to the developing world could we end up doing more harm than good?

The Father of American Manufacturing or Slater the Traitor?

To try and resolve this debate let’s look at the example of Samuel Slater who was born in the town of Belper in Derbyshire, the UK,  in the 18th century.

The BBC writes: In 1782, Slater was offered an apprenticeship with Jedidiah Strutt at his cotton mill in Belper.

At the time the US was the world’s biggest exporter of cotton but was unable to process the cotton because it lacked the technology, added the BBC.

Britain was aware of this and so in 1774 passed a law banning textile workers from travelling to America.

US entrepreneurs were desperate to acquire the machines. The temptation proved too strong for Mr Slater who left for America in 1789 disguised as a farmer. He took with him the secret of the water-powered spinning machine.

Thanks to his efforts – which were aided by his excellent memory as of course in those days there were no smartphone cameras to take photos of design blueprints – the US textiles industry flourished. By 1815 there were 140 mills operating more than 130,000 spindles within a 30-mile radius of the city of Lowell in Massachusetts.

The US textile industry shifted from its dependence on Britain for technology, with this dependence soon broken across many other industrial sectors.

Mr Slater is thus sometimes referred to as the “father of American Manufacturing” whereas in his home town of Belper he was known as “Slater the traitor”.

But as the BBC again reports, one person in Belper now regards him as “just clever lad” and the town enjoys strong links with the US, thanks to Slater. It is twinned with Pawtucket in New England where Slater set up his first cotton mill.

This seems likely to reflect Britain’s evolution a long time ago from being a manufacturing to a service-led economy.

What is the right interpretation here? Regardless of the rights or wrongs of what Mr Slater did were the economic and societal gains for America outweighed by the damage to the British economy?

There also quite a few other examples where the US appears to have acquired, or perhaps stolen, intellectual property from Britain during its early years.

Would it be right to accuse the US of historical amnesia and hypocrisy by going after China over allegations of intellectual property rights abuses? Or is this unreasonable as Mr Slater’s actions were justified whereas those of China’s are not for perfectly sound for reasons I have failed to outline here?

I am going to sit on the fence and leave it to you to decide.