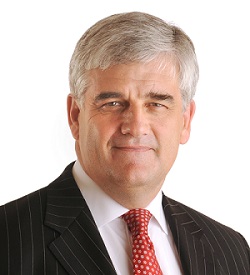 Following our post earlier today on the alleged Iranian attacks on oil tankers in the Gulf our guest blogger, Chris Parry (CBE), has provided essential further analysis on the shooting down of a US drown by Iran. Chris, a former Rear Admiral in the British Royal Navy, is now a strategic forecaster and risk expert. He is the founding chair of the UK’s Marine Management Organisation and is an internationally recognised authority on existing and emerging aspects of the marine and maritime warfare environment. A regular broadcaster and commentator in UK national newspapers and magazines, he is also an active author. His books include the best-selling Down South – A Falklands War Dairy and Sea Power in the 21st Century.

Hard on the heels of the attacks by Iranian Revolutionary Guard Corps (IRGC) personnel against tankers in the Gulf last week comes the shooting down of a US BAMS-D GLOBAL HAWK unmanned aircraft over the Straits of Hormuz.  The US Navy confirmed that ‘a US Navy Broad Area Maritime Surveillance (or BAMS-D) ISR [surveillance] aircraft was shot down by an Iranian surface-to-air missile system while operating in international airspace over the Strait of Hormuz.’ 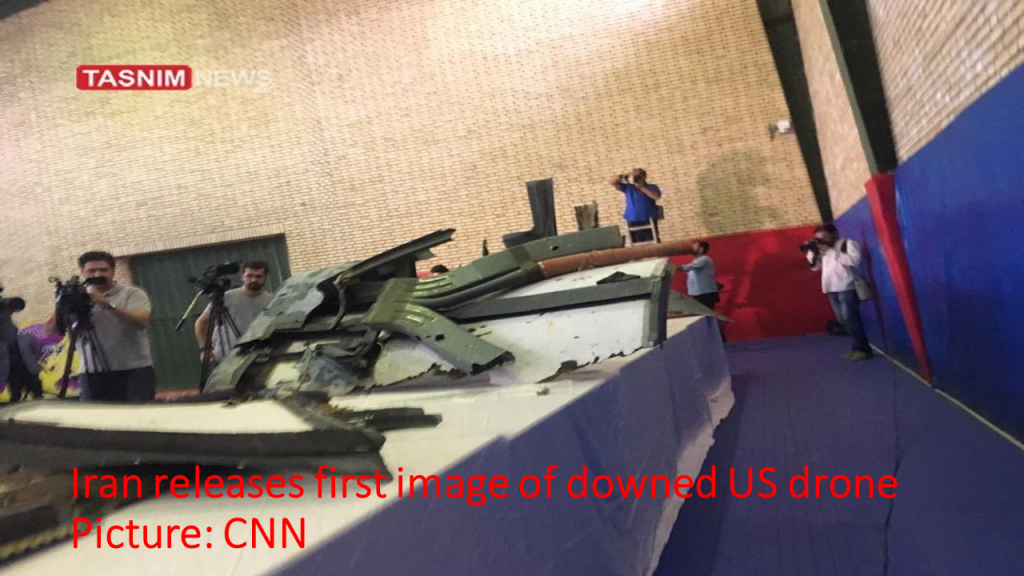 Further statements added that the aircraft had been destroyed by an IRGC surface-to-air missile fired from a location in the vicinity and that it had been operating at high-altitude, approximately 34 kilometres from the nearest point of land on the Iranian coast, well outside Iranian airspace and territorial seas.  Indeed, the US Department of Defense issued details of the GLOBAL HAWK’s flight path and its relationship to territorial seas.

The Iranians claimed that ‘we’ve retrieved sections of the US military drone in OUR territorial waters where it was shot down’.  As can be seen, the US statement that it was flying in international airspace is entirely consistent with the GLOBAL HAWK falling from altitude on a trajectory heading in that direction.

Once again, it is unclear whether the action was authorized by the Iranian regime or whether deniable or rogue elements in the IRGC were to blame.  However, the initially hard-nosed response from the US, with the President tweeting that Iran had made a ‘big mistake’ was followed by the apparent acceptance that things might not have been as they had initially appeared.  Nevertheless, the incident is a clear indication that, once again, the IRGC or elements of it are not entirely under the control of the Rouhani regime.

Someone in Iran evidently believed that attacking a drone was a low risk option.  The problem is that GLOBAL HAWK is no ordinary drone.  It’s the Rolls-Royce of drones and costs anything between US$120 and US$165 million.  To give some idea of its capacity, this particular airframe had flown all the way from its base in Patuxent River in Maryland to Doha without stopping five days before.  It represented a major US strategic surveillance asset.

The GLOBAL HAWK, which carries a full suite of electro-optical, radar and electronic intelligence gathering systems, is designed to fly along the edge of territorial seas and land borders in areas of contention and conflict and report back what is happening.  It normally operates at high level – about 65, 000 feet – but can use its electro-optical turret to examine targets and objects of interest by flying at lower altitudes.  That manoeuvre might have brought this particular airframe into the engagement envelope of an Iranian surface-to-air missile site whose commanders found the opportunity too hard to resist.

The Iranians have engaged or attempted to engage US drones before.  They tried to bring down several in 2013, with the unlikely result that the US had to use a highly advanced F-22 RAPTOR fighter escort to counter Iranian fighter aircraft.  The Iranians actually shot down a US MQ-9 REAPER drone in Yemen on 6 June and attempted to splash another with a shoulder-launched missile during the IRGC attacks on the two petrochemical tankers in the Gulf of Oman on 13 June.  The engagement of the GLOBAL HAWK appears to have been conducted by an advanced area surface-to-air missile system, which the Iranians have claimed was the Russian supplied SA-11 BUK, the same system that brought down a Malaysian airliner over Ukraine in July 2014.

The US has felt at liberty to conduct this type of mission in international waters for several years, especially in the Strait of Hormuz, by relying on the Straits transit provisions of the UN Convention of the Law of the Sea (UNCLOS).  These allow the free passage of ships and aircraft though international straits.

However, there are two problems. The first is that neither Iran nor the US have ratified the UNCLOS and the second that the interpretation of passage through an international strait by an aircraft or ship is open to question if it does anything other than transit through.  In some eyes, the GLOBAL HAWK’s activities might not have qualified under UNCLOS.  The Iranians certainly seem to have taken advantage of that narrow loophole.

There is no doubt also that Iran would have been concerned that video evidence of the IRGC’s attacks on tankers last week confirmed very quickly who had been responsible.  The attack on the GLOBAL HAWK will have served two purposes, one would have been to strike a propaganda blow against US technical might (and Iranian commanders, without irony, made great play in speeches of the ‘brave’ action of their operators); the other would have been to dissuade the US and other countries from conducting aerial surveillance in the Strait.

From the available evidence, the Iranians, despite their claims that the GLOBAL HAWK was violating their airspace, appear to have breached international law.  The shooting down of the drone represented the destruction of a sovereign asset in defiance of what has been accepted as normal practice in this part of the world for some time.  Despite attempts by the US to de-escalate the crisis and pass the incident off as yet another example of the Iranian regime’s lack of grip on the various factions within the country (President Trump called it, ‘loose and stupid’), further attempts by Iran to destroy US surveillance assets will serve only to escalate tensions between the US and Iran.

The US will not want to lose another expensive asset and will have almost certainly have warned the Iranians that it will have been a case of ‘one strike and you are out’.  Crisis prevention relies on confidence building and transparency.  Without surveillance, the Iranians would be free to act as and when they choose in the Straits of Hormuz.  If the US and other protectors of the international rules-based system cannot conduct surveillance to ensure that a country such as Iran is abiding by its international obligations, misunderstandings can occur that would normally lead to crisis and conflict.

PREVIOUS POST China's polyethylene demand in 2019 now at risk as slowdown gathers momentum
NEXT POST Global polyethylene: Supply is not the problem, it is demand