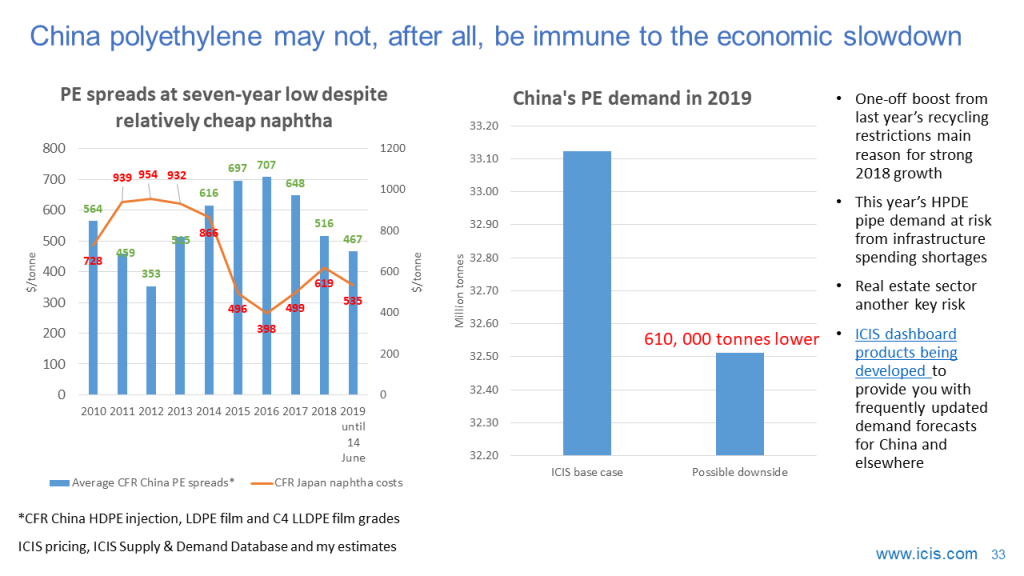 JUST when most of us thought we had figured out China’s polyethylene (PE) market, its ambiguities and complexities could again be about to come back and bite us. I am beginning to think that 2019 demand growth may not be as robust as I had thought would be the case only two weeks ago.

What the market now seems to be saying is that PE growth isn’t as immune as I and some others had thought to the a slowdown in the overall Chinese economy. China’s restrictions on imports of recycled PE and cardboard may have also delivered such a big one-off benefit that they almost entirely accounted for last year’s stellar growth.

Yes, to a significant extent PE’s heavy end-use in single-use packaging of daily necessities and cheap luxury goods sold online will prevent demand growth from cratering. You don’t stop eating food and washing your hair in shampoo when an economy slows down.

Further reasons for cheer include changing lifestyles that might become more prevalent because of a slower economy, including eating restaurant food delivered to homes. The deliveries arrive wrapped in PE. And don’t forget government efforts to boost consumption-led growth in China’s poorer provinces.

A means of achieving this is new inland-focused internet sales platforms that sell food and cheap luxury goods. These platforms, paid for by the central government,  are a great way of boosting consumption because goods sold online are cheaper than goods sold in bricks and mortar shop. This is especially important in inland China because of lower income levels than on the coast.

All of the above has become the accepted wisdom, leading to PE demand growth forecasts of around 8% for 2019 over last year. The latest ICIS forecast for 2019 is in this zone – 7.8% to be exact.

But market sentiment remains very weak in China because of the credit-induced slowdown of the economy and the trade war. Also weighing on sentiment is the large extent of overstocking. Apparent PE demand in January-April (net imports plus local production) increased by 13% year-on-year. Net imports rose by a quite staggering 22% to 5.6m tonnes. Of the three major grades of PE, LLDPE saw the biggest increase at 37% to net imports of 1.9m tonnes.

Given the large gap between January-April apparent demand growth of 13% and our estimate of full-year actual growth of 7.8%, this to some extent helps to explain the dips in buying interest and sentiment. But the dips are lasting a lot longer than many people thought. This is not just a case of overstocking dragging the market down.

One cause for concern relates to the boost to 2018 growth from the heavy restrictions on imports of recycled PE and cardboard that were introduced in January 2018.

“We originally thought 2018 demand would increase over 2017 by 6%. Our error was mainly down to the restrictions that boosted demand for virgin PE,” said a polyolefins industry source.

“This left our final assessment of 2018 growth at more than 9%. There will be an inevitable slowdown of growth back towards 6% in 2019, as the recycling restrictions delivered a one-off benefit. Recycling imports are already at virtually zero,” he added.

“I don’t buy the idea that China’s PE demand will be entirely immune to this year’s economic slowdown. We are seeing indications that PE is not invulnerable,” he added.

There’s the problem of demand for high-density PE (HDPE) pipes used in infrastructure projects. Provincial governments lack money to spend on infrastructure because tax cuts have led to a reduction in funds supplied to them by the central government.

China’s real estate sector is showing signs of stress as a result of continued government efforts to rein-in excess borrowing. Over the last two years high risk shadow bank lending, which is the main source of funding for real-estate companies, has been reduced by $2 trillion. House prices in China’s major cities were stable in May. But if the trade war intensifies consumer confidence will further deteriorate, placing stress on prices. Some 20% of China’s GDP growth is down to the real-estate sector. You don’t buy a house when you are worried about the economic future. When you don’t buy a house you don’t need to kit out a kitchen with all the utensils made from PE.

PE isn’t just used to package daily necessities and cheap luxury goods. It is also used to package TVs, refrigerators, washing machines, auto parts and all the other durable goods where sales are being badly hurt by the credit slowdown and the trade war. Petrol tanks are also made from HDPE. China’s auto sales are in deep trouble.

And if the market is genuinely so good why aren’t PE producers making more money? The left-hand chart at the beginning of this blog post shows that PE spreads over naphtha feedstock costs remain at a seven-year despite relatively cheap feedstock costs.

Therefore, let’s for argument’s sake knock two percentage points off our 2019 growth forecast of 7.8%. A 5.8% increase in demand would result in this year’s consumption totalling 32.5m tonnes – 610,000 tonnes short our expectations, as the chart on the right at the beginning of today’s post indicates.

I could very easily wrong of course as markets can so quickly change. This is actually the main point of this post. ICIS is developing a suite of new products that will enable you to track changes in supply and demand on a weekly basis, even a daily, basis. Markets have become far too unpredictable to depend on forecasts that are infrequently updated.