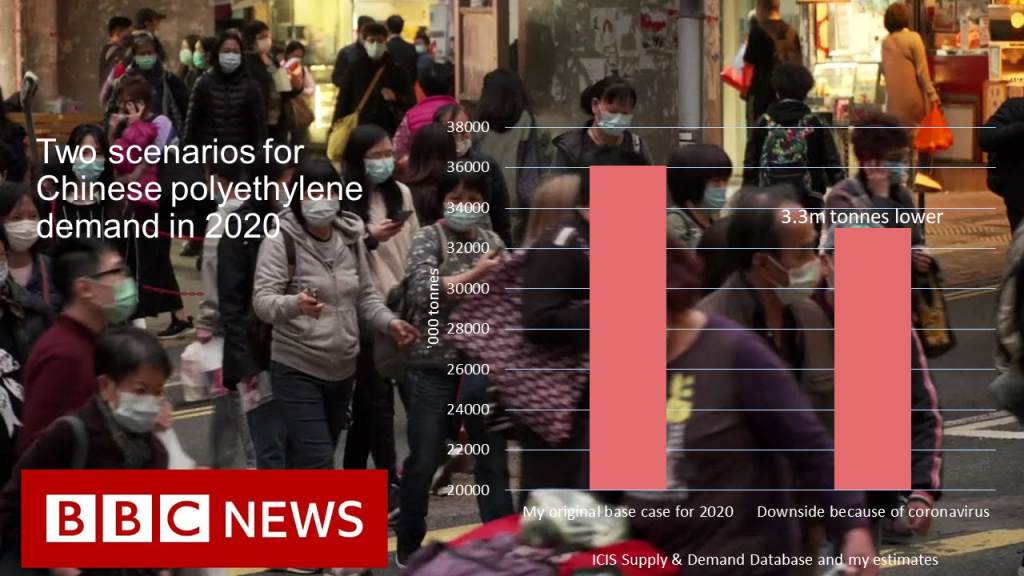 THE GOOD news is that medical experts believe the novel coronavirus (2019-nCoV) outbreak will follow the path of SARS and die down by April or May at the latest when warm weather usually arrives in China. Coronaviruses in general, and SARS is part of the same family as this latest outbreak, don’t like warm weather.

The even better news would be if Beijing gets the virus under control before the end of the first quarter. This is what everyone is obviously hoping for.

Even if the virus is controlled in Q1 – which would involve the rise in the number of new cases peaking pretty soon as there will be a long lag effect before confidence fully returns to Chinese consumer spending and global supply chains return to normal – there will still be a loss of petrochemicals demand in 2020 versus earlier forecasts.

Why this is unavoidable relates to the Lunar New Year Holidays being a peak consumption season in China. Focusing as usual on the implications for polyethylene (PE) demand, think of all the lost packaging demand from the many millions of people that won’t have bought chocolates and other luxuries to take to their relatives.

During the biggest annual human migration in the world all the missing bus, train and car journeys will mean less consumption of drinks and snacks. Drinks and snacks are often packaged in PE in some way.

Will the government get this crisis under control within the next few weeks? Because China is able to exert so much central control the answer could be yes. Strictly enforced quarantine regulations apply to some 60m people.

But because China can exert so much central control the answer might be no. What if local officials, worried about getting into trouble with Beijing, don’t take the necessary swift decisions necessary to bring the virus under control?

See the above graph which assumes that we have to wait until April for the warm weather to arrive as the government will be unable to contain the spread of the disease. It would then take Chinese consumer demand and global supply chains until Q3 to fully recover.

My assumption on PE is that with packaging demand accounting for around 50% of final consumption in China, a lot of the lost demand from curtailed Lunar New Year spending cannot be recovered because, as I said, this is  peak consumption season. There will also be reduced demand for the PE needed to manufacture and package Chinese exports.

Around a quarter of my original estimate for 2020 demand is at risk, covering the months from February until April. That would be 9m tonnes based on my 36m tonnes estimate for 2020. If you then say packaging demand is down by half over the three months this would amount to 2.25m tonnes of lost consumption.

Add 800,000 tonnes for lost exports etc. and you get to my guesstimate of 3.3m tonnes of lost demand – 8.6% lower than my base case. Thanks to fellow blogger Paul Hodges for getting to this guesstimate, and also the thinking of half a dozen other industry contacts.

If the ideal scenario of the virus being under control by the end of March is realised, lost demand will be lower than this. Or perhaps the impact will be worse if the government fails to bring the outbreak under control and the warm weather only arrives in May or later.