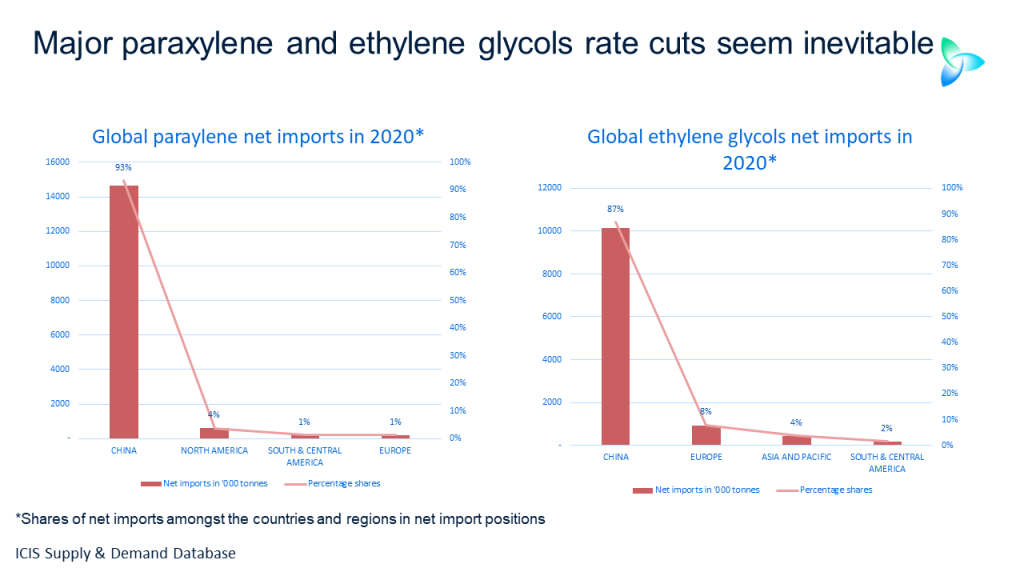 A GREAT example of the extent to which global supply chains are exposed to China is in the polyester sector where, as you can see from the above charts, China completely dominates global net imports of paraxylene (PX) and ethylene glycols (EG).

(Sorry for the acronym soup, but that’s the nature of the highly complex and heavily interdependent petrochemicals business.)

No exporter of either of these fibre intermediates can possibly find any other markets that can come close to replacing China. Because of the coronavirus outbreak, China will be unable to consume anywhere near to its usual volume of cargoes for the next few weeks at least.

It gets even worse when you consider China’s strong position in polyester fibres, PET films and bottle grade where it has substantial positions in global net export markets. This is also evident from the chart below. 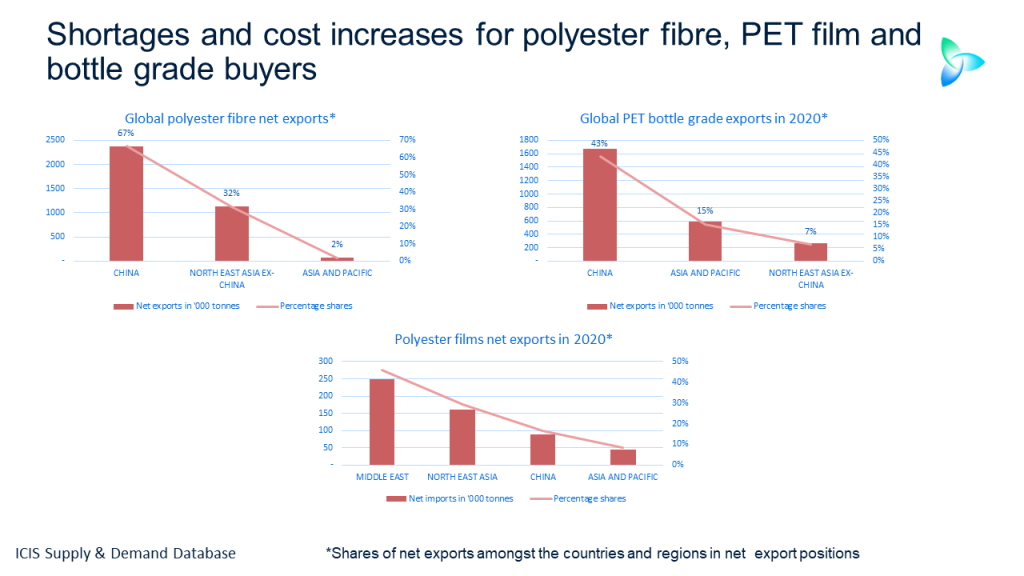 China might not be able to take deliveries of the PX it needs to make purified terephthalic acid (PTA) because of labour shortages at ports. PTA is reacted with MEG to make polyester. MEG may also be held up at Chinese ports because of a lack of customs officers and dockers able to handle arrivals.

Where will all the reformates and ethylene go?

Even if PX and EG cargoes can be unloaded there is much-reduced demand because, if you go all the way downstream to the textiles mills, many of the mills are shut due to transport restrictions affecting most Chinese provinces. The restrictions are preventing workers from returning to their jobs following the Lunar New Year holidays.

On top of this is China’s dominant role in global textiles exports. The latest World Trade Organisation data show that China accounted for 28% of total global textiles exports in 2018, although this is likely to have fallen by a few percentage points in 2019 as a result of US tariffs on Chinese imports imposed as part of the trade war. Countries such as Bangladesh gained some of China’s market share.

It is a similar but not quite as extreme a story in polyolefins where exporters are also heavily dependent on China as the world’s biggest import market.

Back to the polyester chain. It seems inevitable that, as with polyolefins, significant operating rate cutbacks will be essential, if they haven’t taken place already, at overseas PX and EG plants – and in plants in China.

What will the refiners do with the mixed xylenes and toluene that’s used to make PX? Disposing of all the reformates into gasoline may be impossible because of the significant global hit now likely to be occurring in gasoline demand as people travel less because of fears of infection.

Refinery run cuts, not just in China but elsewhere also, may be essential – if again they haven’t happened already. In China, I mentioned on Monday that Reuters has reported that Sinopec has cut its February run rate by 12%, its biggest monthly reduction in more than a decade. The Financial Times reports that China’s independent refiners have cut their production by 40-50%.

What will the steam crackers do with the spare ethylene not needed to make EG? This will add to the pressure for steam cracker rate cuts that’s also being applied by the fall in Chinese polyethylene demand.

Losses for refinery and petrochemicals producers are just a small part of the picture. In electronics and autos, global lost revenues will be mounting because of the vital role that China plays in the industries’ component -and finished goods supply chains. Apple may have to delay the launch of its new I-Phone by several weeks because of production difficulties at its main assembler, China-based Foxconn, the FT again reports.

Think of the packaging industry downstream of petrochemicals. Focusing again just on the polyester chain, the cost of PET film and bottle grade is likely to have risen for converters and brand owners. In many countries, the converters and brand owners are under a lot of pressure from supermarkets that are very reluctant to pass cost increases onto consumers. PET film and bottle grade supply may also be insufficient to meet consumer demand.

I am sorry that this sounds so gloomy, but it is what it is and we must face up to the consequences. This is going be a far, far bigger deal than SARS because of the very different nature of China’s relationship to the global economy than in 2003. Refineries, petrochemicals companies and their suppliers need scenario workshops – brainstorming sessions where best, worst and medium cases outcomes from the virus can be tested out.