REPORTS of soaring apparent polyethylene (PE) demand (imports plus domestic production) in China continue as the search also persists for an explanation, given the country’s weak macro-economic environment.

Last week we wrote of  a 13% increase in demand in January-June of this year  compared with the same months in 2011, based on data from Global Trade Information Services.

And now Morgan Staley has said in a 5 August report:  “Chinese PE demand growth is improving and tracking +12% YTD (year-to-date) through June, though we note against easy comparisons of +2% and -1% in 2012/2011, respectively.

“Reported Chinese PE demand increased by 19% in June against a 12% compared with June 2012 [see the chart below].” 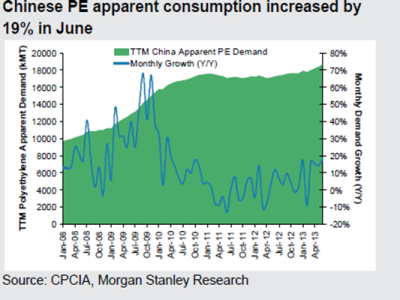 “While industrial end-markets remain choppy in the region, PE demand has been a source of strength thus far.

Operation Green Fence – the crackdown on imports of polluted scrap PE – might also be a factor, as we discussed in last week’s post.

As Morgan Stanley points out, China represents approximately 25% of worldwide ethylene demand and so the recovery is one heck of a big deal – although as the bank concedes, the rebound needs to be put firmly into the context of a weak 2011 and 2012.

The blog’s entirely unscientific canvassing of opinion has continued in an effort to identify the biggest reason for the recovery.

We have spoken to seven producers, traders and consultants over the last week, five of whom think that restocking by traders and end-users is the largest single factor behind the rebound.

“One of the reasons for restocking is the thinking that the recent mini-stimulus package will improve economic conditions for the small-and-medium-sized enterprises,” said a Malaysia-based polymers trader.

A chemicals analyst concurs that the recovery is mainly due to inventory rebuilding that, of course, must have begun long before the mini-stimulus package was announced on 24 July.

He thinks that the main factor behind restocking is that people have over-estimated the strength of the approaching peak manufacturing season because they believe reports that the West is out of the economic woods.

(The peak manufacturing season runs from from August/September until October/November, when finished-goods manufacturing is ramped up in China ahead of the Christmas shopping frenzy in the West).

“I don’t think that the buying has been cautious enough because of what is, in reality, still a weak economic environment in the US and Europe,” he said.

“The big [US] picture remains unchanged. Four years after the recession officially ended, per capita output and income have yet to return to their pre-crisis highs. The recovery still ranks as the worst since World War II. And despite the modest acceleration in the past two quarters, the recovery shows little sign of gaining momentum,” wrote the Wall Street Journal last Thursday.

Fellow blogger Paul Hodges in this post, in which we quoted the WSJ article, provides an excellent analysis of the long-running problems facing the US economy

And what continues to worry the blog is that the wheels of restocking have been greased by the abundant availability of finance earlier this year.

As we pointed out in May, quoting James Gruber who writes the Asia Confidential newsletter, monthly social financing (total financing including formal and informal lending) in the first quarter of 2013 was Rmb2.1 trillion. This was higher than the monthly average of any single quarter since the introduction of the data in 2002.

In that post in May, we also predicted a mild H2 rally in petrochemicals prices as a result of excessive credit and therefore a greater appetite for risk.

As the chart below shows, PE prices have rallied, whatever the reasons. 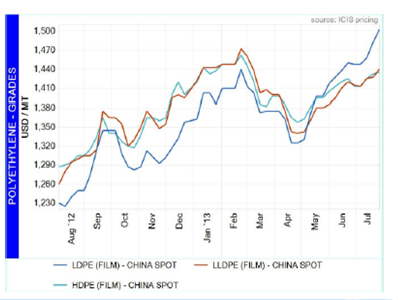 Restocking, and thus PE price increases, might also have been driven by worries amongst end-users that supply has become tighter.

There are widespread, but unconfirmed, reports of a significant drop in Iranian low-density PE (LDPE) production, and/or that Chinese buyers are finding it harder to obtain local credit for Iranian material because of politics.

Reports, again unconfirmed, also persist that the new ExxonMobil complex in Singapore, which comprises 1m tonnes/year of metallocene linear low-density PE (LLDPE), will run at well below 100% for the rest of this year.

What is confirmed is that  PTT Global Chemical’s low density polyethylene (LDPE) plant in Thailand will be shut down for more than three months because of an outage, with Petlin (Malaysia)’s LDPE facility due to soon undergo a turnaround.

But in the final reckoning, as one industry source told us:  “As always, petrochemical companies don’t really know why PE has performed so well.

“They just look for easy answers that seem logical enough to satisfy analysts during earnings calls.

“Bottom line is that no one seems to really care about why the volume is up. Everyone is instead just happy that it has happened.”