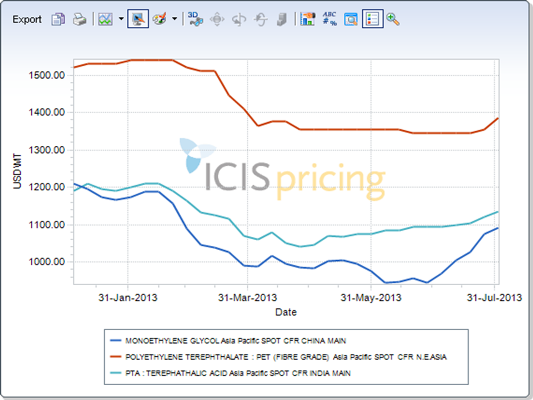 THERE has been a strong recovery in China’s synthetic fibres value chain since May of this year, according to Becky Zhang, our excellent ICIS pricing Asian fibre intermediates and synthetic fibres editor, who keeps her finger firmly on the pulse of the market.

Becky attributes the rebound to:

But aside from the latter supply issues that have offered and may continue to offer support to fibre intermediates, the blog is concerned that claims of a better economic environment are unsubstantiated.

As is the case in polyethylene (PE), we worry that the peak manufacturing season, when finished-goods manufacturers in China ramp-up production to meet demand from the West for Christmas, will turn out to be a big disappointment, not just for China but for the rest of Asia as well.

“Growth in exports from seven of East Asia’s biggest exporters – Japan, China, South Korea, Taiwan, Thailand, Hong Kong and Singapore – slowed to a halt in the second quarter, according to national trade data compiled by Reuters, led by a 9% drop in exports to the European Union compared to a year earlier,” wrote Reuters in this article.

“Growing trade between China and its neighbours has failed to offset a sharp decline in demand from Europe and slumping demand for things made in Japan. More troubling is that the slowdown dashes expectations earlier this year for a gathering recovery in the US to trigger a rise in demand for Asian exports.

“Exports still represent the equivalent of roughly 35% of the region’s combined economic output. But the US recovery has been led by housing and shale-gas investment, not demand for the electronics [and perhaps textiles] Asia’s factories supply.”

“While [manufacturing] surveys in the West may be improving, they have yet to lift the mood among managers in Asia. HSBC/Markit’s survey of regional purchasing managers indicates that new orders are falling in China, South Korea and Taiwan, and that growth is slowing in Japan.

“ ‘This suggests that an immediate rebound is not on the cards for Asia,’ Frederic Neumann, co-head of Asian economic research at HSBC in Hong Kong, wrote in 2 August note to clients.

“ ‘In developed markets, broadly speaking, things have picked up nicely. But the feed-through to emerging markets is lacking.’ ”

As for the argument that China’s economy might be picking up, it is possible that all that extra liquidity in Q1 of this year might take six months or more before it is fully reflected in macro-economic data.

Bu fellow blogger Paul Hodges, in this post, makes the very convincing argument that electricity consumption, and growth in loans since the first quarter, support the notion that Beijing is firmly committed to a very painful and prolonged restructuring programme.

The extraordinarily strong editorial in the China Daily, which Paul quotes at length in his blog post, is worth printing out and pinning on every chemicals company boardroom wall as an indication of where China is heading.

By John Richardson SOME people in the petrochemicals industry are showing great ...