China, The November Plenum And De-Stocking 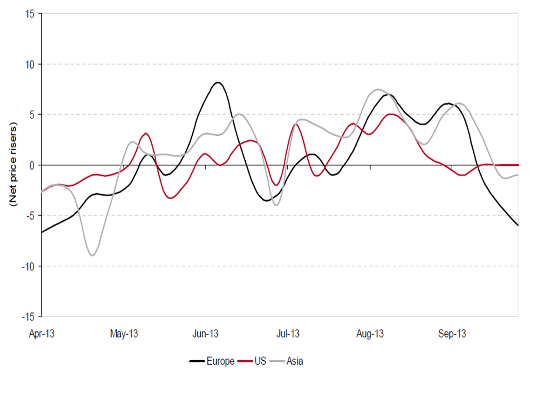 THE end of China’s Golden Week holidays, which ran from 1-7 October, has represented an opportunity for some polyolefins traders.

“Stocks were low before the holidays, and, as a result, once business activity resumed in earnest on 10 October, we have seen a considerable uptick in buying from the converters,” said one Singapore-located trader.

Tight supply, or in some cases perhaps just the perception of tight supply, continues to also bolster markets.

For example, supplies of low-density polyethylene (LDPE) from Iran are said to remain very limited, for reasons that remain unclear.

Equally opaque is continued unconfirmed reports of low operating rates at the 1m tonnes/year of linear low-density (LLDPE) ExxonMobil complex in Singapore, which was brought on-stream earlier this year.

As usual, nobody really knows when demand might weaken.

But it is worth highlighting the risks ahead, which include an announcement at next month’s crucial November plenum that total social financing, particularly lending via China’s troubled shadow-banking system, will be reined back. It is  only a question of when rather than whether this will happen, we think.

Paul Satchell, UK-based chemicals analyst with global investment bank Canaccord Genuity, has also highlighted this risk in his October  Chemicals Volume Proxy report (The Volume Proxy is intended to gauge volumes, and thus demand, through weekly changes in 33 spot chemical prices in the US, Europe and Asia, as assessed by ICIS. See the chart above showing the latest in Volume Proxy for all three regions).

“The downside risk in Asia that speculative inventories, which we believe have been built earlier in China, could be liquidated in a disorderly manner if the policy stance moves to a reduction in liquidity,” added Paul [We suspect that these stocks have mainly been built by domestic Chinese traders].

“In our view, the Third Plenum of the Central Committee, in November [its full title), is the key risk in this regard,” he said.

Obviously, therefore, producers, traders and buyers involved in any chemicals and polymers in Asia should bear this in mind.

To return to PE specifically, on the supply side, according to ICIS:

But we think that all the above supply issues are essentially a distraction for producers interested in proper scenario planning over the next 6-12 months.

The real issue companies should instead be focusing on is the underlying strength of demand when stock-building has been discounted.

Despite the 14% rise in China’s apparent demand growth (domestic production plus imports) in January-August of this year, it is a worth a reminder that the producers and buyers we have spoken to estimate actual growth at only 3-6% for the full-year 2013.

And so a disorderly de-stocking process, similar to what happened during much of 2011 and 2012 if not on the same scale, is a significant risk – as Paul has pointed out above.

If the November plenum isn’t going to be the trigger for de-stocking, what about the failure of politicians in the US to agree on raising the debt ceiling by October 17?

During our discussions over the last few days, nobody in the PE market has voluntarily raised this issue. And when asked, they have said, “we have no idea about what effect it would have, but we are sure the politicians will reach a deal”.

It is very hard to plan for something that has never happened before, but it is still vital to have a go.

We will look at the debt-ceiling issue in more detail later this week – if a deal still hasn’t been reached, of course!!