Home Blogs Asian Chemical Connections It Is Not A Question Of If, But Rather When

It Is Not A Question Of If, But Rather When 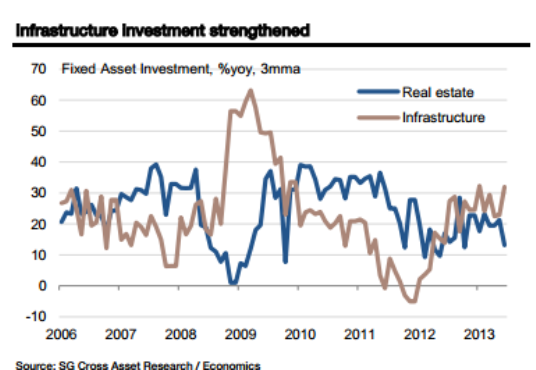 IT is not a question if, but rather when Xi Jinping and Li Keqiang decide that enough is enough and get on with tackling China’s growing financial imbalances. That is if they don’t want the whole house of cards to eventually collapse, which we believe is not the case.

These imbalances have become worse this year, as we discussed yesterday.

And fellow blogger Paul Hodges agreed when he also pointed out yesterday: “2013′s official lending  is up 7% versus 2012, and 50% above 2008 levels.  But the real action today is in the shadow banking area, where the state-owned enterprises (SOEs) have been operating.  After first squeezing them in June, the authorities relented in July, allowing shadow banking to account for an unbelievable 87% of total lending.

“Clearly this was far too high, and August data shows it was reduced to 55% of the total.  But even this level shows lending is essentially still out of control.”

Meanwhile, the pace of growth in official bank lending so far this year has been the slowest since 2006, said this FT Alphaville blog post, which further underlines that the problem lies in shadow banking.

And so where is the money going?

As the chart above – sourced from the same FT Alphaville blog post – again emphasises, most of the money is being spent on even more bridges to nowhere and empty regional airports and public buildings – i.e. unneeded infrastructure.

The next question is: When will Xi and Li take the bull by the horns? We think this will happen after the November plenum.

And the final question is the timing of the impact. Once it happens, stock and commodity markets will, of course, head south.

Jian Chang, Hong-Kong based economist with Barclays Capital, thinks that the extra credit sloshing around the system will sustain things for the next few months, quite possibly into next year.

But as she wrote in a research note: “Despite improving activity in the near term, our baseline view is still for no sustained acceleration in domestic demand