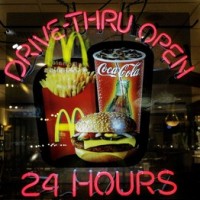 THE classic image of the high-school student flipping Big Macs has become out of date in the US, according to this New York Times article.

“Because of lingering unemployment and a relative abundance of fast-food jobs, older workers are increasingly entering the industry ,” adds the NYT.

“These days, according to the National Employment Law Project, the average age of fast-food workers is 29. Forty percent are 25 or older, 31% have at least attempted college and more than 26 % parents raising children. Union organisers say that one-third to one-half of them have more than one job.”

They include Eduardo Shoy, 58, who on the weekend before Thanksgiving slept for 13 hours and worked for 44 hours.

We think that this might well be further evidence that the trickle-down effect isn’t working.