In the first of a series of special posts on how China’s lending environment is set to change, we focus on the murky world of shadow banking.

We will return to shadow banking, and to other “grey” areas of financing, in later posts in order to assess what role they have played in chemicals and polymers demand growth in 2008-2013 – and how this might be about to change.

And we will devote some space to thinking about changes set to occur in the official lending sector – that is credit supplied by China’s state-owned banks. 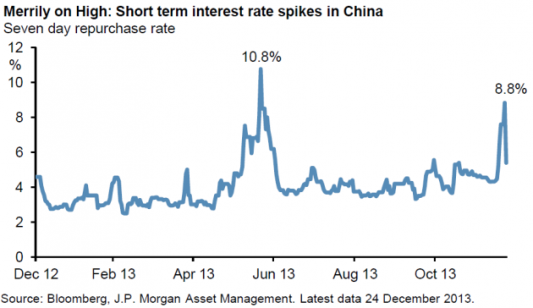 Now it is all starting to fit together.

Andrew Sheng, president of the Fung Global Institute, and former chairman of the Hong Kong Securities Commission, has provided a very good history of China’s shadow-banking system in this article in the Japan Post.

“The shadow-banking system emerged to meet the demand from private firms and SOEs [state-owned enterprises) for extra liquidity to help them cope with the slowing economy and fulfil their investment commitments,” Sheng added.

“Private-sector entrepreneurs in cities like Wenzhou were willing to pay annual interest rates as high as 15 to 20%,” he said.

“On the supply side, savers — including wealthy households and corporations with surplus cash — wanted positive real interest rates on their deposits. Loan-guarantee institutions, trust companies and others sought to benefit from the gap between the 3.5% return on one-year fixed deposits in the official banking system and rates of up to 20% in the shadow-banking sector.

“The result was a 43% increase in shadow-banking credit last year, accounting for 29% of China’s total credit.”

As with any credit bubble, financial practices become ever-more dodgy (including sub-prime in the US, of course) the longer the bubble stays inflated.

Thus, last August, the Financial Times wrote an article based on the work of Ann Stevenson-Yang, Research Director and founder of J Capital Research.

“Everyone [in China’s auto market] is offering 0% financing now and in some cases buyers end up with their car for free,” wrote the newspaper.

“How? The buyer pays for the car but with the guarantee of the money back in two years. The seller invests the money in the shadow banking system where he hopes for returns of 60% a year or so before selling up and giving it back. Not bad,” the newspaper added.

“But as Stevenson-Yang notes, in the past this kind of thing has ‘not ended well.’ If you are getting 60% on your money (or even hoping to) you are not in an investment but in a pyramid scheme of one kind or another. And if you live in a country where any meaningful part of growth is built on such pyramid schemes you are living on the edge of a crisis.”

We are no longer living on the edge of a crisis but are in a crisis – or at least that was the impression created by a People’s Bank of China (PBOC) statement, which was released a few days ago.

The PBOC, China’s central bank, talked of how “massive borrowing and construction led by local governments in recent years” had increased the risks for the economy.

And it issued a warning that it would not relent on its policy response, which has already involved two engineered cash crunches in the interbank lending market, which have led to a surge in interest rates and greater volatility in the costs of borrowing.

The first cash crunch occurred last June, when the seven-day repo lending rate surged to a record 10.8% as institutions struggled to obtain funds, as the above chart illustrates.

Then last December,  as the chart also shows, the repo rate more than doubled to 8.8% as lenders hoarded cash to meet year-end regulatory requirements.

“The rate traded between 3.66% and 5.4% in November, a range of 174 basis points, according to a daily fixing from the National Interbank Funding Centre. That compares with a 62 basis-point range in November 2012,” said Bloomberg, in this article.

In its statement, the PBOC said that the market needed to continue to tolerate “reasonable rate changes so that rates can be effective in allocating resources and modifying the behaviour of market players.”

The PBOC added that it would, however, use tools including the reserve-requirement ratio and short-term lending facilities to ensure “appropriate liquidity.” [The reserve requirement is the percentage of money they have to hold in reserve against their loans].

But at the same time, the central bank warned that it wouldn’t bankroll a growth model that relied on investment and debt –and that as a result, credit might be squeezed, especially for small businesses.

“Interbank rates are exactly where the PBOC want them to be and higher rates are their way of beginning to deleverage the economy,” Stephen Green, head of Greater China research at Standard Chartered in Hong Kong told Bloomberg.

“It’s not a perfect strategy and it certainly carries risks, including more corporate stress as credit costs go up, but it’s going to deliver slower credit growth which everyone agrees is necessary,” he said.

Higher interbank rates were “meant to squeeze all the activities associated with too-cheap funding. This is about disciplining investment decisions and reducing leverage,” added Green.

The PBOC statement was issued just as business began to pick up after the Lunar New Year break.

This is a further signal that the when of major economic rebalancing has become the now.

The dilemma for chemicals and polymer producers is to work out, in light of the credit squeeze, what are realistic future rates of demand growth in key end-use sectors such as autos.

PREVIOUS POST China And The Fed: Still Back To Front
NEXT POST The US Patient Needs An Operation