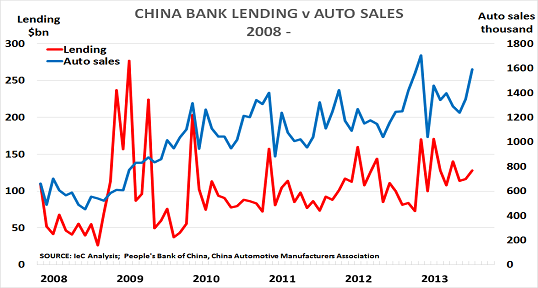 Autos are now the largest single manufacturing industry in the world.  Not only do they directly and indirectly employ vast numbers of people, but they are also increasingly key to consumer spending.  Thus it is no surprise that governments have tried to increase auto sales since the Crisis began in 2008.

China is the prime example of this trend.  Annual sales in 2007 were just 6.3m in 2007 – no surprise, given that even today, average urban household incomes are just $4.8k and rural incomes only $1.7k.  But since 2008 it has become the largest auto market in the world, as its lending policy has led to an auto sales boom, as the chart shows:

As the Financial Times has described, based on Ann Stevenson-Yang’s report for J Capital Research:

“Everyone’s offering 0% financing now and in some cases buyers end up with their car for free. How? The buyer pays for the car but with the guarantee of the money back in two  years. The seller invests the money in the shadow banking system where he hopes for returns of 60% a year or so before selling up and giving it back. Not bad. But as Stevenson-Yang notes, in the past this kind of thing has “not ended well.” If you are getting 60% on your money (or even hoping to) you are not in an investment but in a pyramid scheme of one kind of another. And if you live in a country where any meaningful part of growth is built on such pyramid schemes you are living on the edge of a crisis.”

What does this mean for future auto sales growth?  In the past few months, there has been little to stop the lending and sales boom.  But next month’s Economic plenum may well start to move the economy in a new direction.  China simply cannot afford to allow lending to boom forever, even if the risks of bursting today’s bubble are also large.

Anyone assuming that auto sales growth will continue at recent levels is clearly making an enormous gamble on the new leadership’s ability to navigate these very tricky waters.   Most worrying is the thought that most companies haven’t even realised the gamble they are taking.