India Creates 20,000 New Jobs A Month When It Needs One Million 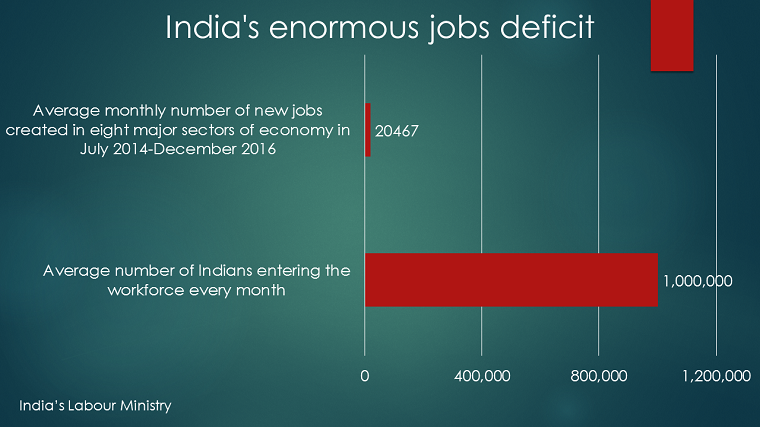 WHEN Narendra Modi was campaigning to be India’s Prime Minister in 2013 he promised to create 10m new jobs every year.

But in July 2014-December 2016, after Modi had become PM, 614,000 jobs were created in India’s eight major employment sectors – manufacturing, trade, construction, education, health, information technology, transport, accommodation and restaurants. This compared with 1.28m jobs generated in these sectors between July 2011 and December 2013, before he took office.

If you calculate this 614,000 as a monthly average against the some 1m workers that enter the Indian market every month, you end up with the above chart. Even more worrying is a new report that India actually lost 1.5m jobs during the first four months of this year.

What is going wrong and will it be put right?

Demonitisation and the GST

“There is no text book in economics that I have studied which says that rooting out black money is a precondition for development,” Saurabh Mukherjea, chief executive of Ambit Capital, told the FT.

“We’ve gone on this crusade against black money. The main consequence has been that we have killed the vitality of the economy,” he added.

He was referring to demonitisation. This was the decision in November 2016 to remove the two highest denomination banknotes – the 500-rupee and 1,000-rupee notes – from circulation. No less than 86% of hard cash has been removed from the Indian economy.

As the Ambit chief executive indicated, this was about rooting out black money from the economy in order to reduce corruption, which was another of the PM’s election promises.

But India has lots of small workshops, trading companies and stores that operate on a cash-only basis – the “vitality” of the economy as the chief executive says.

Small businesses were then delivered another blow by the June 2017 introduction of a long-awaited nationwide goods and services tax (GST).

Demonitisation could make sense over the long term as only 1% of Indians pay income tax. Unless tax collection can be improved it is going to be much, much harder to find the money to improve infrastructure.

Also, all the different state-level excise duties have made moving goods around India heavily bureaucratic, and so very slow, and extremely expensive. The GST is an attempt to create a genuinely unified nationwide economy for the first time. This would lead to much-stronger economic growth.

But the ways that demonetisation and the GST have been introduced have dampened short term growth. The IMF has, for example, has reduced its estimate for growth in the financial year April 2017 until March 2018 to 6.7% from 7.2%.

Wouldn’t it have been better to make sure that India had adequate cash machines ahead of demonetisation? The shortage of the machines meant that people struggled to get access to new bank notes.

And wouldn’t it have been wiser to provide more support to help small businesses cope with demonitisation?

As of late last year, at least 165m Indians didn’t have bank accounts. This has further compounded the negative impact of demonitisation.

Wouldn’t it have been better to wait until either more Indians had bank accounts? Or wouldn’t a gradual phase-in of demonitisation have worked better rather than its introduction virtually overnight? Or why bother with demonitisation at all?

As for the rollout of GST, was it ever realistic to introduce the scheme so quickly given the nature of such a large proportion of India’s economy? An estimated 95.5% of Indian businesses employ just 1-5 people.

The Indian government is responding with GST compromise measures to make the new tax easier for small businesses. But in so doing, the risk could be that the tax becomes so compromised that it fails in its objective of creating a genuinely nationwide Indian market.

Let’s hope that these are just short term teething problems and that GDP growth will very quickly come roaring back.

But if the PM is going to be ultimately successful he has to make more progress in dealing with the 320m Indians out of a population of 1.2bn who lack access to a toilet. He has promised to give every Indian access to a toilet by 2019.

If you don’t have access to modern sanitation then you are at risk of frequent illnesses. And when you are ill, it is hard to attend school to get the education you need to become a useful member of the workforce.

Other problems are said to include:

But is this staring at a glass half empty rather than half full? :

In a later post, I will crunch the data and provide with you scenarios – best, medium and worst case – for Indian demand growth in two key products – polyethylene and polypropylene – in 2017 and 2018.

I shall also provide with you with a five-year view. This will involve scenarios of complete success, moderate success or an outright failure of the PM’s bold reform agenda.

You might want to instead only assume that all will be fine in India. This would fit with today’s consensus view about the global economy in general. But I believe that this would be very unwise.