...global risks remain elevated and so beware of complacency 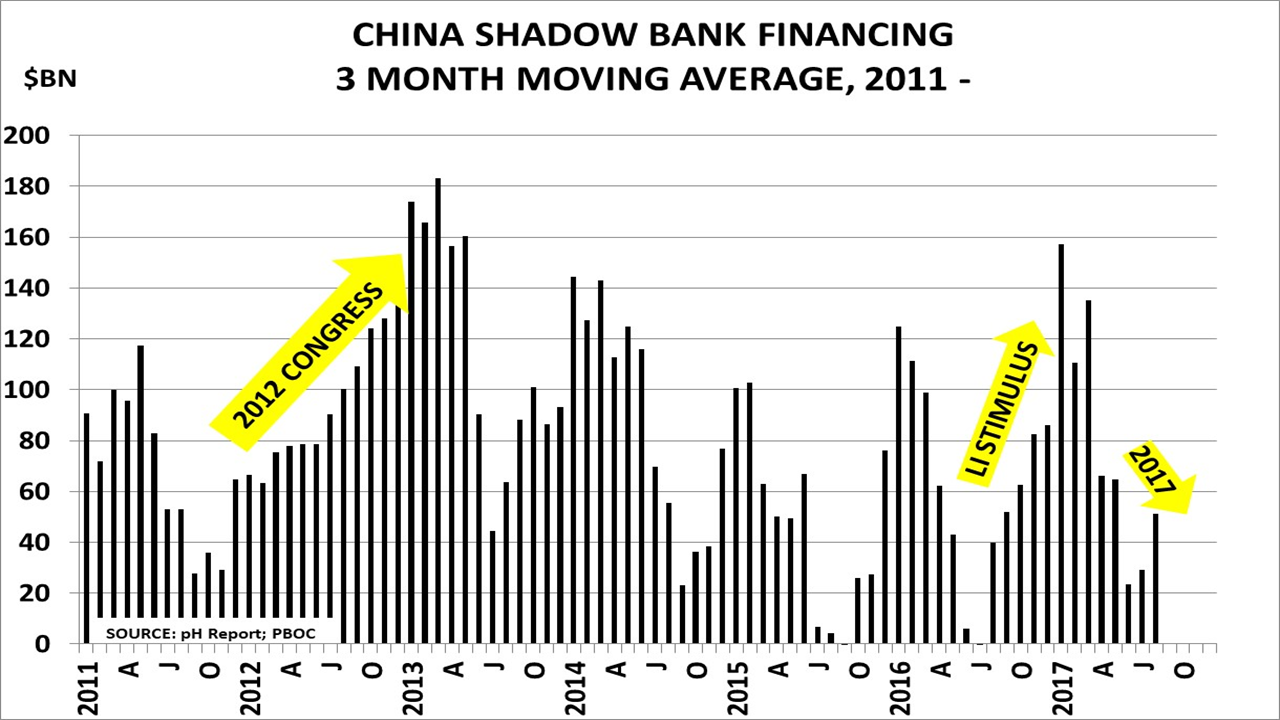 THE conventional view is that China has stimulated its economy to perfection ahead of the important 19th National Party Congress which begins in Beijing on 18 October.

The theory goes that President Xi Jinping has kept the lending spigot firmly open in order to create booming economic growth, and thus a favourable political atmosphere, ahead of the meeting. The congress will see Xi’s re-appointment for a second five-year term. We will also find out the make-up of the rest of the Politburo, and it is even possible that Xi will seek to extend his tenure as president beyond 2022.

But the latest data on lending via China’s shadow banking system doesn’t support the notion that, to use economics jargon, the economy has been pump-primed to ensure the right political mood. As you can see from the above chart, credit availability from this source essentially fell off a cliff from April 2017.

Xi and his fellow economic reformers are reining-in high risk lending, which is via the shadow or private lending system, because they understand that China has reached a “Minsky moment”. Some heavily indebted companies are borrowing more money merely to service existing debts. They cannot borrow this money officially from the state-owned banks so they have to depend on private lenders.

Companies that have to borrow more money just to meet existing debts are often operating sub world-scale plants in oversupplied industrial sectors. Margins are, as a result, wafer thin or non-existent.

These same plants are also bad for the environment because they employ technologies that were good enough during China’s previous growth phases. This was when GDP growth at the cost of major degradation of air, soil and water quality was acceptable.

And because margins are so squeezed, this kind of industrial capacity often flouts the rules on emissions in order to save on costs. So starve these companies of capital and you kill two birds with one stone by a.) Getting rid of inefficient industrial capacity that is holding China back as it tries to move up the manufacturing value chain and b.) Closing down factories that are bad for the environment.

This is taking place in parallel with probably the biggest environmental clean-up campaign that the world has ever seen. Factories are being:

Accelerating the economic and environmental campaigns

Whilst Beijing has obviously made big progress in controlling the growth of shadow lending, overall credit growth – via both the private and state-owned banks – remains strong. This is referred to as total social financing (TSF). TSF growth in August was higher than had been expected.

Reuters pointed to the cause when it wrote in a 15 September article:

Household loans, mostly mortgages, rose to 663.5 billion yuan in August from 561.6 billion yuan in July, according to Reuters calculations based on the central bank’s data.

Household loans accounted for 61 percent of total new loans last month, down from 68 percent in July.

Short-term household loans in August doubled from July to 216.5 billion yuan, reflecting a surge in consumer lending as some home buyers may have turned to short-term consumer loans due to curbs on mortgages, analysts said.

The government looks as if it is about to target this kind of lending. In a 30 September article in the China Daily, the state-run newspaper, China’s banking regulator said that China had to learn lessons from the US sub-prime crisis. The regulator added that short-term household, or consumer, loans are meant to fund travel, education, home renovation and consumer durables and not mortgages.

The chart below from Bloomberg indicates the rise in home loans as a percentage of GDP is some of these smaller cities. 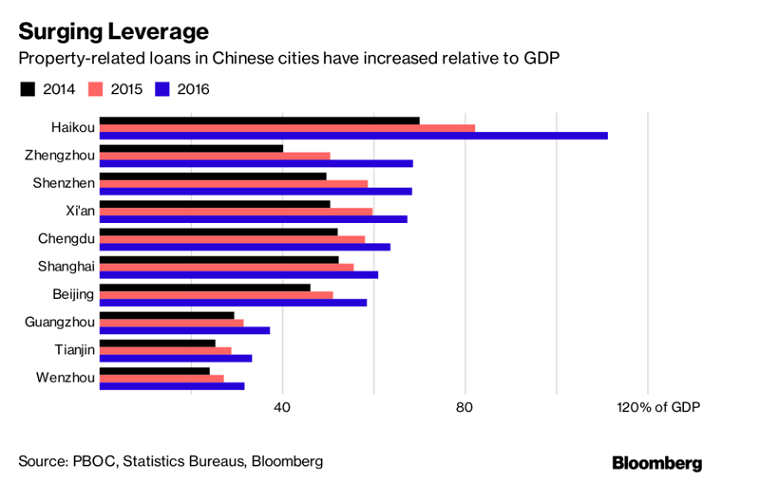 In a sign that efforts to control the property bobble are working in the bigger cities, but have yet to take effect in the smaller cities, the overall June national sales volumes of new homes was up by 14% on a year-on-year basis, but was minus 26% in the Tier 1 cities.

Beijing is clearly still playing its whack-a-mole game against risky speculation in real estate and other areas of the economy.

We should therefore expect more measures over the next few months to limit the growth of shadow lending, to deal with misallocation of consumer loans and to rein-in the property bubble in China’s smaller cities.

I also believe that China will stick with its environmental clean-up campaign, with even more stringent policy measures are a strong possibility.

Confidence about the global economy is very high right now. Expect plenty of congratulatory slaps on the back when central bankers, finance ministers and money managers meet in Washington this week for the International Monetary Fund’s autumn meeting.

But the apple cart could so easily still be upset by China.

But China is still at risk of a financial crisis as it will have to write-off as much as $8.8 trillion of loans – equivalent to 84% of its GDP.

There are booming new sources of economic growth that offer tremendous hope – for example, the breath-taking increase in mobile Internet sales. But nobody knows whether these new sources of growth will be enough to compensate for bad debt problems and the loss of economic momentum as inefficient steel mills and chemicals plants are shut down. And to what extent have mobile internet sales been driven by unsustainable leverage in real estate?

New sources of growth also include renewable energy and electric vehicle. I believe that China has a chance to steal a march on the West thanks to its increasingly innovative economy. But you have to balance this against the cost of the environmental clean-up. Societie Generale estimates that the air-pollution campaign could cost 0.25 percentage points of GDP growth over the next six months.

And most importantly of all, we don’t know if China’s economic reform programme will work over the long term.

Can it clean up its environment by enough to prevent a major exodus of the middle class people it needs to retain to escape its middle income trap? What about the wider economic, social and political costs of its failure to deal with its environmental crisis? It is no exaggeration to say that this crisis is existential. And what if it cannot be innovative enough to escape its middle income trap?

The geopolitical dimension also must be ignored. I argued in August that China had found itself with more time to realise its One Belt, One Road programme because the White House had backed away from major protectionist measures.

But that was August and this is now. Donald Trump is now pushing his “America First” agenda through import tariffs and trade investigations in passenger jets, washing machines, steel, aluminium and China’s alleged lax protection for intellectual property rights. Together, these measures could still amount to a global trade war that China can ill afford as it attempts to entirely re-invent its economic growth model.

PREVIOUS POST How China Will Help South Asia Maximise Its Demographic Dividend....
NEXT POST India Creates 20,000 New Jobs A Month When It Needs One Million