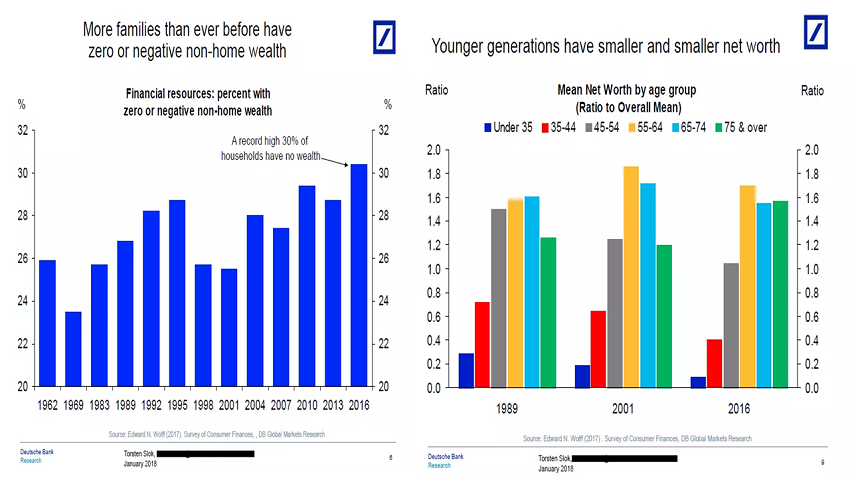 THE SUSTAINABILITY of the US economic recovery rests on the willingness of people who cannot afford to spend money to continue to spend money.

In order to explain what I mean, let’s start with income and wealth distribution in the US.

A US Federal Reserve study showed that the 90% of US families at the bottom the economic pile made less than half of the country’s wealth in 2016. This was down from 62% in 1992.

Another study is also cause for concern. The median 40% of adult earners controlled 28% of total US wealth in 2014, according to World Health and Income Database. This was down from 37% in 1986.

Sure, Labor Department data released last week showed that January hourly earnings rose by 0.3%, which was enough to lift the annual rate of increase to 2.9%.

But wage growth for “production non-supervisory” positions – the bottom 83% of the jobs market – was only 2.4% higher on an annual basis.

This suggests that the percentage increase for the top 17% of the US workforce was a lot higher than the overall average of 2.9%. In other words, there has been a further increase in inequality.

Also, take a look at the two Deutsche Bank charts at the beginning of this blog post from a total of eight charts provided by the bank.

As you can see from the chart on the left, more US families than ever before had zero non-home wealth in 2016. The chart on the right shows how young people appear to be slipping behind in terms of their net worth.

And yet in November 2017, US credit card debt reached $1.023 trillion. This was higher than in April 2008 – just  before the Global Financial Crisis.

Why? It is a confidence thing. People are prepared to build up debt today if they believe economic conditions will be better in the future, even if their personal outgoings don’t immediately justify the spending. As Michael Schreiber quite brilliantly wrote in this NBC News article:

Let’s imagine a middle class family with good credit. Their salaries aren’t going up, certainly not enough to keep up with their skyrocketing healthcare costs.

They live in the northeast and they’ve just found out that their insanely high property taxes are no longer deductible; they’re tired of all cold weather, and they could really use a vacation. They can’t really afford to take one, but they did get a credit card offer in the mail with a zero percent APR introductory offer.

It’s like a $100 bill burning a hole in their pockets. They decide, a bit on a whim, to get the credit card and find a deal for an all-inclusive vacation to Jamaica, where they’ve always wanted to go.

“But what about the stock markets?” I hear you say. That’s right. Paper wealth for many people has gone up thanks to the record-breaking equity market bull run.

But the Fed study I quoted earlier on found that only around one third of the economic bottom 50% owned shares in 2016 either directly or indirectly. Of the one third, the average stock portfolio was worth just $52,000 – lower than in 2013.

As we all know, the Dow Jones Industrial Average last week saw its worst week since early 2016. On Friday alone the market was down by 666 points – -2.5%.

This was the result of concerns that inflation would force interest rates higher than had been anticipated. Bond yields responded accordingly, with the ten-year Treasury yield set to test 3% for the first time in four years.

Another factor behind the sell-off was said to be political turbulence in Washington. Nothing new here, of course, but when the mood becomes gloomy, all negatives that have been out of focus tend to come into focus.

A declining stock market could dent consumer confidence as even amongst people who don’t own equities, the value of stocks are seen as an indication of the strength of the economy. Consumer confidence recently reached a 17-year high.

US consumer confidence indices are thus worth watching as they are a good leading indicator of a recession, according to Nobel Prize-winning economist Robert Shiller.

Might substantial tranches of consumer debt have to once again be written off? Seeking Alpha wrote on 23 January:

By the time you read this article, the market could have bounced back and may go on to new highs.

But this would do little to resolve the US income and wealth gap. These are symptoms of the impact of automation on global labour markets and the effect of an ageing population on underlying, long- term consumption patterns.

Because these challenges are not being met another US recession is inevitable, with the only question being its timing.

My views are a long way from the consensus and I of course could be wrong – very wrong.  Let’s have a data-driven debate on this issue.

Meanwhile, be warned that the consensus isn’t always right. Chemicals and other companies would be wise to plan for a significant slowdown in the US economy.

PREVIOUS POST China Accelerates Pollution Campaign In 2018: Implications For Chemicals
NEXT POST House Of Cards Waiting To Fall: Oil, Equities And The Economy