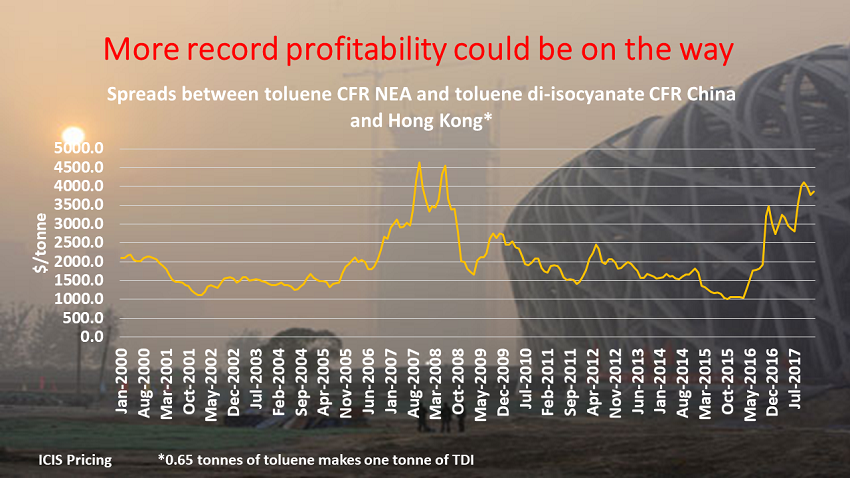 ON THE surface of things there will be no let up when China’s winter air pollution campaign ends in March, as I predicted would be the case. China is drawing up plans for tougher curbs on smog levels during the two years until 2020, with the details due to be released in H1 of this year.

A further $10.2bn of environmental spending has already been allocated for 2018. This will be targeted at air pollution, water and soil improvements and integrated garbage treatment (perhaps this latter objective will include modernisation of China’s plastics recycling industry). Potentially, therefore, many more closures of manufacturing facilities up and down chemicals value chains could take place in 2018.

Some of these closures would be temporary, giving those in breach of tougher environmental rules time to comply. Others would be permanent as local governments continued moving chemicals and other manufacturing facilities deemed to be toxic to human health away from urban centres.

These permanent closure would both clean up the environment and reform the economy, as many of urban chemicals and other plants have poor economies of scale and operate in oversupplied industrial sectors.

The scale of the disruptions to global manufacturing in general could again be huge in 2018. Reflecting on the disruptions to supply chains during the first eight months of last year, Joc.com, the international shipping and logistics news and analysis service, wrote:

If Beijing is serious about continuing its environmental campaign beyond March, you should assume further volatility in chemicals pricing. This would be the result of more disruptions to the local supply of chemicals and the downstream consumption of chemicals.

At certain times in a trading month, week or even day, chemicals supply disruptions would be greater than demand. Opportunities could open up for exporters to China. At other times, shutdowns would be greater downstream. Exporters caught on the wrong side of these changes could obviously end up losing money.

How would you keep track all of these shifts? Our ICIS pricing reports provide price assessments and analysis of chemicals market via our offices in Houston, London, Singapore and Shanghai.

Notice I’ve listed all our major global offices because the impact in 2017 was truly global. Take caustic soda as an example. Caustic soda cargoes were said to be hard to come everywhere because of many Chinese chlor-alkali plants were shut down.

Epichlorohydrin (ECH) markets are also reported to be still tight globally because of the closure of Chinese chor-alkali plants. Chlorine is one of the raw materials needed to make ECH, downstream applications of which include epoxy resins.

In some industries, this supply tightness resulting from the environmental campaign has of course also led to fantastic profitability. Take the polyurethanes chain as one example, where spreads between the raw material toluene and toluene di-isocyanate (TDI) remain close to their May 2008 high (see the above chart). TDI is used to make flexible polyurethane foams.

Accurate and virtually real time supply and demand data on each the China chemicals value chains you operate in could thus be the key to success in 2018.

But here is a general rule to follow: World-scale chemicals and polymers plants in chemicals industry parks would again probably not be affected – meaning, for example, most of China’s steam crackers. Non-world-scale chemical plants near urban centres would be vulnerable, though, to both temporary and permanent shutdowns.

At least in the case of China’s richer provinces I cannot see any reason why China will not at least maintain the pace of last year’s environmental crackdown. The reason is growing pressure for a better a quality of life now that basic economic needs have been met. But this campaign could go truly nationwide, given that of course pollution is a major nationwide problem.

Beijing recorded a 53.8 % drop in PM2.5 pollution in 2017 whereas concentrations rose in some northeast and southern provinces, according to a new Greenpeace study. Provinces where pollution levels worsened included Heilongjiang, Anhui, Jiangxi and Guangdong (PM2.5 is the fine particulate pollution that is especially bad for human health).

The study blamed the higher provincial figures on increased coal burning from 2016 to late 2017 because of the renewed surge in economic stimulus spending. Excessive real estate investment led to higher steel and cement production, the authors added.

This leads on to another possibility for the rest of this year: If China widens the scope of it its environmental campaign, it could in parallel permanently shut down many more inefficient factories (these factories are also bad for the environment). In so doing, China would speed up the process of dealing with a bad debt problem made worse by the 2016-2017 renewed surge in economic stimulus.

Major volatility in chemicals supply and demand in China might thus take place against a background of lower GDP growth.