House Of Cards Waiting To Fall: Oil, Equities And The Economy 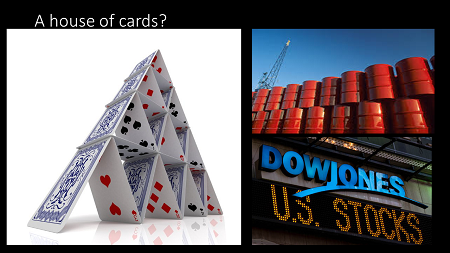 HOW much of the rise in oil prices since June of last year has been down to the fundamentals of supply and demand versus the hedge funds taking out a record number of short positions?

This slight turnaround followed the state of play in late January where the ratio of hedge funds long positions to short positions had climbed to an all-time high of 11.51:1, up from a low of just 1.55 at the end of June. In terms of barrels, this represented 1,484 million held by the hedge funds.

As the funds have gone long on oil they have also gone short on the US dollar in a classic counterbalancing trade. If this reverses then we might end up with not only lower oil prices but also a stronger US dollar. This is a worry for emerging markets and their exposure to dollar denominated debt. Chinese corporates may in particular face problems because as Bloomberg writes:

In the second and third quarters of last year, [Chinese] overseas credit rose at a pace unseen since early 2015 to $1.68 trillion, near an all-time high.

The wire service attributes this to a strengthening of the yuan. The opposite could now obviously happen if the hedge funds raise the value of the dollar.

Meanwhile, the fall in oil prices over the last few days – which has prompted and/or might be partly the result of the hedge funds cutting their long positions – has of course been connected with the correction in equity markets. Conventional opinion holds that the correction is just temporary and that there is absolutely nothing wrong with the global economy.

It might turn out that the correction is indeed temporary – in fact, as I write, the Dow Jones had recovered some its losses on Tuesday with Asian markets set to open higher. But sooner or later the equity bubble will come to an end. The reason is that the economic fundamentals are a lot weaker than many people think.

For example, the underlying data on wage and wealth inequality in the US suggest that the recovery has been too concentrated in a small percentage of high earners. Meanwhile, the squeezed US middle class has only been able to increase its spending because of record low interest rates and easy credit conditions. This has encouraged an alarming build-up in credit card debt.

What Western economies as a whole have failed to address is the drain on long-term demand growth being caused by ageing populations:

Until or unless this challenge is addressed through retraining workers and raising retirement ages etc., the drag on demand growth from a decline in the size of the Wealth Creator demographic cohort will continue.

So why the synchronised global recovery that everyone keeps talking about? Exceptionally easy credit conditions thanks to an unprecedented wave after wave of central bank stimulus. This has, as I said, has led to all that credit card debt in the US and heavy speculation in equities, in oil and other commodities.

The danger is that the Western central banks will aggressively raise interest rates to head off what they see as healthy inflationary pressure.  This is because they are convinced that there is nothing wrong with the global economy.

Today’s inflation is instead the product of an unsustainable increase in debts that are not justified by the real, underlying economic condition of Western economies. Growth has come back, sure. But growth has been artificially inflated by debt.

The risk is that higher interest rates will lead to debt defaults and a bear markets in equities. Oil and other commodities would also retreat both on the hedge funds going short and a loss of real, physical demand as the global economy slows down. Plus, the rise in sustainability is a secular drag on oil demand.

“But what about record company profits and all the strong purchasing managers’ indices (PMIs)?” I hear you say.

Granted, yes. But to what to extent have strong PMIs been driven by purchasing managers buying forward – i.e. buying raw materials than they need each month because of rising crude prices? Now we could be into the reverse position as inventories are depleted. I hope that petrochemicals companies have factored in this risk.

And they key for me on equities is this paragraph from Monday’s FT:  If the interest rate part of the story is on the cusp of a new era, there is little room for error to justify higher valuations, particularly as lofty equity valuations increase the risk that rising rates dent the stock rally. At 18 times forward earnings, valuation levels are higher than both the five- and 10-year average, according to FactSet.

The impact on consumer spending of higher interest rates is one thing. There is also the confidence factor. Take the equities bull run away and this will give the US consumer – and consumers elsewhere – another reason to close their wallets.

Meanwhile, there is China. China has helped to fuel the synchronised global recovery narrative through its 2016-2017 resumption of economic stimulus-led growth. But, as with where the Western central banks seem to be heading, China is also in a credit tightening cycle as it deals with its bad debt issues.

I think that the Chinese economy will slow down in 2018, and could suffer from the failure of a few big corporations that are over-exposed to dollar debt problem that I’ve described above. This, though, won’t necessarily be a severe slowdown as the jury is out on whether China’s debts are sufficient to trigger a crisis in its financial sector.

Politically, also, China’s government might be quite happy to tolerate an easing back in growth as this would be in line with a.) Dealing with bad debts and b.) Tackling the pollution crisis as the focus increases on quality over quantity of growth.

Even a moderate Chinese slowdown could, however, play a major role in a much slower global economy.