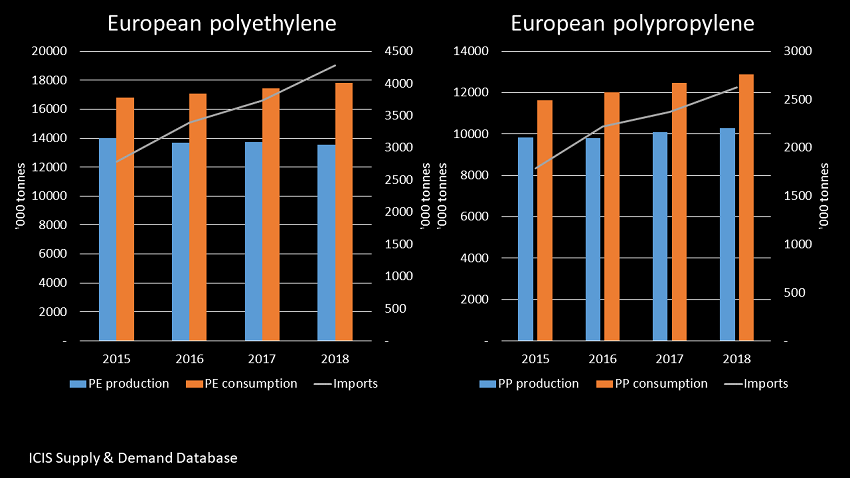 EUROPEAN polyolefins have painful memories of 2016 because it was a year of major supply shortages.

Polyethylene (PE) production in the three major grades was down by an average of 2.3% compared with the previous year, with the sharpest fall seen in high-density PE where production was off by 4.4%. Meanwhile, overall PE demand grew by 1.7%. In polypropylene (PP), production was down by 0.3% as demand rose by 3.5%.

And as you can also see from the above charts, production growth didn’t keep pace with demand growth in 2017 and we expect the same trend for this year. This has of course led to rising import requirements.

A lot of this mismatch is down to lack of new capacity to meet demand growth that, whilst not spectacular, is steady and from a large base in terms of tonnes.

But a major factor behind the European market tightness in 2016 was operating problems resulting from unexpected shutdowns or outages. This is reflected in average PE and PP capacity utilisation which was at 82% in 2016 compared with 83% in 2015.

What doesn’t help plant reliability is that many of Europe’s steam crackers and refineries are old and are thus more likely to suffer mechanical faults.

My fellow blogger Paul Hodges has also long argued that the global problem of a rising number of force majeures lies in spending cutbacks on maintenance. He wrote in February last year:

But the main problem in too many companies is more fundamental – too many senior managers now see profits as being more important than safety.

The digitisation of the petrochemicals industry will, I believe, completely transform this picture.

Right now, being able to detect mechanical faults before they happen is largely down to experience. Lack of enough experienced plant operators in some regions is putting a big strain on the operators. When the pressure increases, human error is more likely. And if Paul Hodges is right, cutbacks on training add to the risk of mistakes.

Step in the artificial intelligence (AI) systems already being used by some petrochemicals companies. Machine learning, combined with ever-more sophisticated sensor equipment, is detecting faults in valves, pumps, reactors and furnaces etc. before they lead to production failures. Together, these technologies represent digitisation.

Safety is another major gain because, as we all know, accidents and petrochemicals plants can lead to serious injuries, fatalities and major pollution incidents.

But if petrochemicals companies are focused too much on profits and less on safety, why would they invest in digitisation? For legislative reasons. When technology is introduced which improves safety, legislation often follows to ensure that the technology is universally adapted. The history of airbags in automobiles is a good example.

Here is how I think event will unfold over the next five years:

Global volatility in pricing and across all petrochemicals and polymers will also be greatly reduced as unexpected production problems largely become a thing of the past.