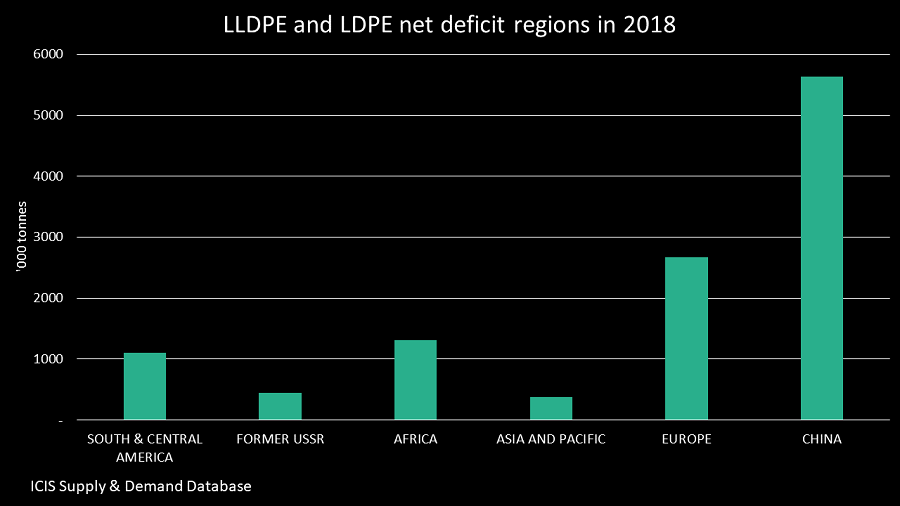 A US-CHINA trade war has become much more likely following the negotiations that took place in Beijing last week. A compromise might of course still be struck, but the signs are not good.

If a trade war breaks out, China would perhaps follow through on its threat to impose 25% tariffs on imports of US linear-low density PE (LLDPE) and low-density PE (LDPE).

China is in a strong position to absorb the impact of the tariffs resulting in a complete halt to US LLDPE and LDPE imports. In 2017, only 6% of total Chinese LLDPE and LDPE imports came from the US. This makes it quite easy for China to fill this gap from other countries – especially the countries with which it has much better trading relationships because of joint membership of the Belt and Road Initiative.

Meanwhile, the US is in a far more vulnerable position. Last year, 12.5% of its total LLDPE and LDPE exports went to China.

If there were no major capacity additions taking place in 2018, a 12.5% hole in exports would still be bad enough. But this year marks the start-up of several major new US cracker-to-LLDPE and LDPE complexes.

The effect on other major deficit regions

My rough estimate is that some 600,000 tonnes of US exports would have to find an alternative home during the rest of this year if the tariffs are imposed. This is based on the assumption that the tariffs make it economically inviable to ship LDPE and LLDPE commodity and semi-commodity grades to China.

The US could of course cut back on production in order to avoid being forced to place these exports in countries and regions other than China. But I see this as unlikely because of the US production cost advantages and the need to maximise output of new plants.

China will have a net LLDPE and LDPE deficit (imports minus exports) of 5.6m tonnes in 2018. As the chart at the beginning of this blog post illustrates, the next biggest deficit region is Europe at 2.7m tonnes followed by Africa, South and Central America, the Former USSR and Asia and Pacific.

If very competitively priced US exports start arriving in Europe, this might add to what is already a very fraught trading relationship between the US and EU – especially if these exports arrive as global economic growth slows as a result of a US-China trade war.

What worries me is that China will find it impossible to meet US demands on trade.

The US has demanded that China stops providing subsidies and other government support to hi-tech industries such aerospace and robotics. But these are the types of industries that are vital for China’s long-term economic prosperity. Unless China moves up the manufacturing value chain, it will fail to escape its middle-income trap.

It is a well-worn cliché, but one that is worth repeating: China is at risk of becoming old before it is rich. Unless it can make more sufficient progress in higher value manufacturing and services, its economy will stagnate. It will thus fail to generate the tax revenues to pay for rapidly rising pension and healthcare costs.

The root cause is the One Child Policy which was abandoned in 2015. The Chinese government estimates that the policy resulted in 200m babies not being that would have otherwise been born.

Labour costs have a result been rising for a decade as the number of retirees versus the number of those of working age has increased. Between 2011 and 2016 alone, average annual wages rose by 63%, according to the government’s National Bureau of Statistics.

Chinese labour costs are higher than Brazil and Mexico and similar to those in Portugal and South Africa. This had led to the drift of low value manufacturing away from China.

Close to half of China’s provincial pension funds are in deficits with northeastern provinces particularly hard hit, according to the government’s Chinese Academy of Social Sciences. The OECD forecasts that China’s healthcare costs will soar from $230 billion in 2012 to $1.3 trillion, largely as a result of the costs of caring for a rapidly greying society.

The speed at which China’s population is ageing further underlines the scale of the challenge. As The Diplomat writes:

Increased life expectancy and lower fertility means that by 2025, when the share of the 65-and-over population exceeds 14% China will officially become an “aged” society. But unlike France, which took 115 years for its share to rise from 7% to 14%, China will have taken 23 years, and much less than in the United States (60 years), United Kingdom (45 years), and Germany (40 years), according to research by the World Bank and Standard Chartered.

Hopes of a US compromise rest on recent history. The White House’s initial very hard line on North American Free Trade Area (NAFTA) renegotiations was softened. As the Financial Times points out, though:

While US business has mostly opposed — and lobbied against — Mr Trump’s hard line approach on NAFTA, it largely supports his goals on China.

“The position that the Trump administration is taking is rooted in fact and is supported by multiple stakeholders,” said one person close to the US business community. “That’s the big difference. … China is in a wildly different place. It’s not analogous to what is happening with NAFTA.”

Petrochemicals and polymers companies in general must therefore plan for the worst outcome – a US-China trade war leading to a global recession.