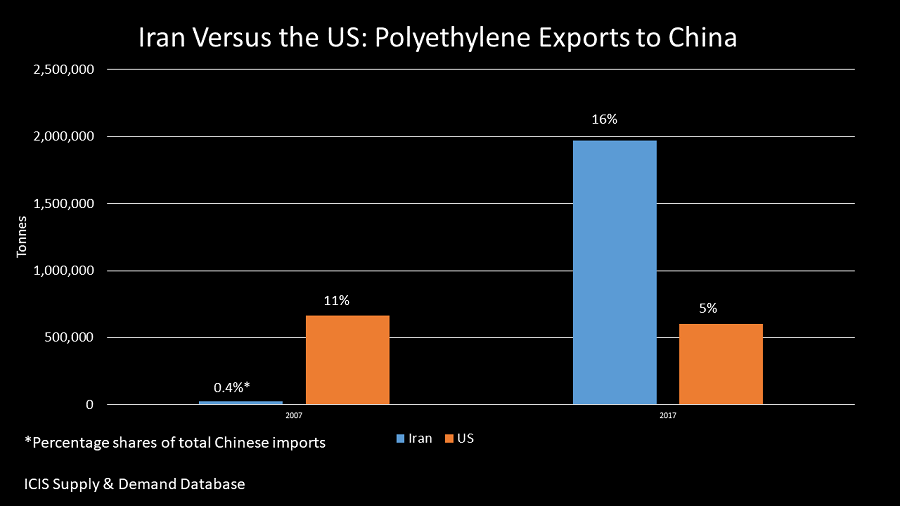 DONALD TRUMP’S decision to pull out of the Iran nuclear deal, combined with the increasing likelihood of a US-China trade war, risks pushing the US polyethylene (PE) industry out in the cold.

The above chart illustrates the US industry’s already difficult position in 2017 compared with ten years earlier. In all three grades of PE, it lost market share in the critically important China market.

In the case of low-density PE (LDPE) and linear-low density (LLDPE) the actual number of tonnes exported by the US to China also fell during these ten years, along with percentage shares. This is despite total imports for these two polymers increasing from 4.2m tonnes to 5.6m tonnes.

The US must regain market share in China if it is to place its rapidly increasing surpluses. Only China is capable of absorbing US surpluses as it will account for 46% of all global PE net deficits between 2018 and 2025 and 49% this year. The maths will not add up for the US if it only builds market share in the world’s other net deficit regions.

But instead of rebuilding its market share in China, the US PE industry is at risk of seeing its imports decline even further.

This is firstly because a US-China trade war has become more likely. US trade negotiators last week asked China to in effect dismantle its new economic growth model. The growth model, which involves heavy government investment in hi-tech industries, must surely continue if China is to maintain long-term economic prosperity.

China cannot, of course, agree to this request. Meanwhile, the US seems to be unwilling to back down as both the White House and Congress are in agreement on the need for a tougher approach to trade with China. We could therefore so easily end up with threats of a tit-for-tat exchange of import tariffs between the US and China becoming reality – i.e. a trade war.

The tariffs that China has threatened include 25% import tariffs on US LDPE and LLDPE. This would make it economically unviable for the US to export commodity and semi-commodity grades of these two polymers to China.

And now we have the US president’s decision on the Iran nuclear deal, which could further boost Iranian exports of PE to China at the expense of the US. The above chart also illustrates how Iran has already made major gains in the Chinese PE markets in the ten years from 2007 until 2017.

Why Iran could export even more PE to China

China is a major importer of oil and gas with Iran a big oil and gas producer. This trading relationship will likely strengthen if new US sanctions make it harder for Iran to export its hydrocarbons to other countries.

Further, if Western oil gas and companies are deterred by new US sanctions from investing in oil and gas exploration in Iran, Chinese companies could step into the breach. CNPC, for example, already has a 30% stake in Iran’s giant South Pars oil and gas field stake which could be increased.

As China invests more in oil and gas exploration in Iran, this would naturally strengthen the two countries’ broader trading relationship, including in petrochemicals and polymers. And perhaps China will also increase its direct investment in the Iranian petchems sector.

There is another important aspect to the existing Iran-China geopolitical and economic relationship, and that is their joint membership of the Belt and Road Initiative (BRI). As CNN writes:

Beijing sees Iran as a vital notch in its Belt and Road project to spread Chinese influence and commerce westwards. State-owned investment arm CITIC Group has a $10 billion credit line [to Iran] and China Development Bank is considering another of $15 billion.

The US withdrawal from the nuclear deal gives China the opportunity to further strengthen its relationship with Iran via the BRI. China is eager to seize every opportunity to promote the BRI as I believe that the BRI has to succeed if China is going to escape its middle-income trap. In other words, the BRI is as important as Chinese government subsidies for domestic hi-tech industries.

Add this all together and it is easy to see how Iran might end up exporting more PE to China at the expense of the US.

The US decision might create a major geopolitical and economic rift between it and the other signatories to the nuclear deal – China, France, Russia, the UK, Germany and the EU. Here is how events could play out:

What might this then mean for US PE exports to the EU, given that Europe is the world’s second biggest deficit region behind China? Might US-EU PE trade be subject to new tariffs?